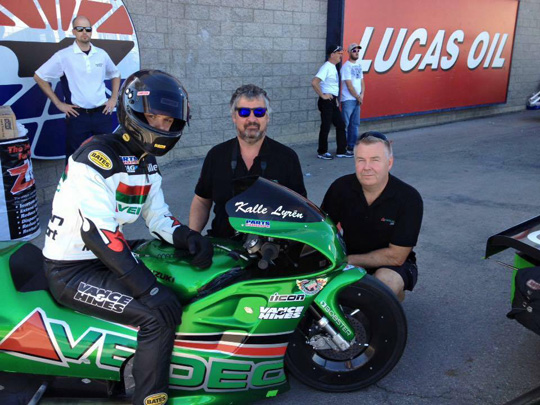 Kalle Lyrén saw a dream come true in racing at Las Vegas and Pomona, the last two rounds of the NHRA Mello Yello Drag Racing Series. Although the 2014 EDRS Pro Nordic MC champion did not qualifying in the largest and most competitive Pro Stock Motorcycle field in more than a decade, he came close at Pomona, made his first ever 6-second pass, and reset his personal best top speed! “Of course, as a racer you always want to do better and qualify, but the experience and everything we learned, is worth so much more”, said Kalle Lyrén, looking back at his weeks in the States.  END_OF_DOCUMENT_TOKEN_TO_BE_REPLACED 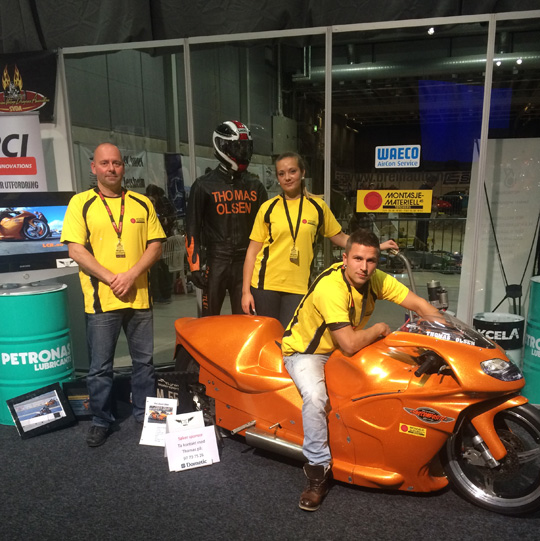 Thomas Olsen and his Brothers in Arms Racing team did a great job last weekend in not only representing their own team, but also the sport of drag racing in general at the Oslo Motor Show, Norway’s biggest meeting for motor enthusiasts. Many questions were answered about their beautiful Pro Stock Motorcycle and the sport of drag racing, and with their enthusiasm, the team members were real ambassadors for the sport and gave many visitors a first taste of what drag racing really is.  END_OF_DOCUMENT_TOKEN_TO_BE_REPLACED

Reigning champion Micke Kågered entered the European Finals as the leader in the FIA European Top Fuel Championship. But after a dominant win at Tierp and a strong Euro Finals qualifying, Anita Mäkelä was more and more the favourite to win the title in eliminations. Despite that, Kågered did it again, won the rounds he needed to win, and claimed his second consecutive FIA Top Fuel title. Jari Halinen played an unexpected, but major role in the outcome of the championship and race. The Finn didn’t qualify for eliminations, but could enter the race as alternate, to defeat Mäkelä in the first round and win the final from just crowned champion Kågered.  END_OF_DOCUMENT_TOKEN_TO_BE_REPLACED

The winners took it all in Pro Modified, Top Methanol Dragster and Top Methanol Funny Car at the European Finals at Santa Pod, as Michael Gullqvist, Dennis Habermann and Leif Andreasson not only won the event, but also the FIA European Drag Racing Championship title in their respective categories. In Top Fuel Jari Halinen was the surprising winner of the event, but the title stayed with last years champion Micke Kågered. In Pro Stock Jimmy Alund defeated Thomas Lindström in the final, but with a semi-final win against Michael Malmgren, Lindström had already clinched the 2015 FIA European championship title. With the European Finals, the 2015 FIA European Drag Racing Championship came to an exciting end.  END_OF_DOCUMENT_TOKEN_TO_BE_REPLACED

With the Scandinavian Internationals, the 2015 EDRS Pro Nordic Motorcycle Championship got the final it could only have dreamed of. In Pro Stock Motorcycle it was a historic race with three riders breaking into the 6 second zone, and two of them even running a string of 6-second passes. In a great side-by-side final, Fredrik Fredlund defeated new crowned EDRS champion Robert Karlsson. In Super Twin Motorcycle Samu Kemppainen was not as dominant as earlier this season, but still the Finn won his third consecutive EDRS Pro Nordic MC race, and with it the title. In Super Street Bike, Richard Stubbins from England was in a class of his own and took the win, but with a semi-final finish, Björn Friström extended his EDRS title.  END_OF_DOCUMENT_TOKEN_TO_BE_REPLACED

For the third race of the EDRS and EDRS Pro Nordic Motorcycle Championship the riders and teams will visit their third different country and third different race track. Halfway through the season it’s time for the traditional Drag Challenge at the famous Gardermoen Raceway. And already before the first wheel turns, this year’s edition of the Norwegian race will be a historic one. END_OF_DOCUMENT_TOKEN_TO_BE_REPLACED