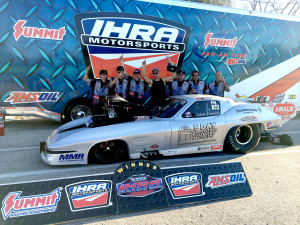 The former European successful driver Adam Flamholc has already got the hang of the IHRA racing over in USA. This year he goes for the whole series. In Europe we will see him around some of the European FIA teams. But not in any own car, so far. Lucky american spectators will have this guy for their sight in the race car. And first win is already home.

The plan was to test Thursday before the event, to make sure the team found the electrical gremlins they been suffered from Bradenton a couple of weeks ago. But unfortunately they couldn’t get the truck and new trailer done in time, so they arrived early Friday at the track.

The car ran ok, but not the way they expected during qualifying. Adam ended up at fifth position after three rounds of qualifying. The team worked late Saturday evening, and finally found the problem!

-In round one I was up against Billy Glidden” says Adam. Billy is a great driver, and have won a lot of races, so I knew it was gonna be a tough one. We managed to pull off a great run 5.89 s to Billy’s 5.98, and advanced to round two. In round two it was time to take on Billy Harper. Harper qualified as number one, and recorded a new IHRA ET record (congrats to them). Another good run in a great race, I ran 3.90 to Billys 3.95. He left a little bit on me, so it was close, but I won! In the final I faced Jerico Balduf. Jerico is a young very talented guy, that have been running very good lately. I knew what they were capable of, so I was very motivated and focused. Unfortunately for Jerico, they had some problems with the car pretty much from the start of the run, so a 5.95 was enough to take the win in the final.

Adam is extremely happy and proud of the guys in the team! They just stay at it and keep the spirit up, keeps working “in good and bad times”!

– An awesome car built by Joey Martin, great supercharger from Mike Janis, incredible motor built by HRE (Hameetman Racing Engines) and MMR(Malmo Motor Renovating)!!! And thanks to Amalie Oil, 5 Days Plantation Shutters and Blinds, Stallningsbyggarna, Performance Plus, Ekdahls Miljo, R&R rods and Linnarhults Terminalen. Without you guys supporting us, none of our racing will be possible! Says a happy Adam from the other side of the Atlantic Ocean. It feels great to go to Ennis Texas for round two in the championship as points leader!

What a great weekend for Flamholc Racing