After the season kick off at Tierp Arena, the EDRS Pro Nordic Motorcycle Championship travels to the brand new Kauhava track for round two of the championship. The Tierp Internationals were blessed with excellent racing and new European records in Top Fuel and Pro Stock Motorcycle, a promising prospect for some exciting action at Kauhava. With Filippos Papafilippou, Marcus Christiansen, Vesa Ruhanen, Kalle Lyrén, Rasmus Östlund and Trygve Kaerstad Helgerud as the leaders in their respective categories, the EDRS Pro Nordic MC has riders from five countries in the number one position. Three of them will defend their leading position in Finland, while the other three will see their pursuers close the gap or even take the lead. 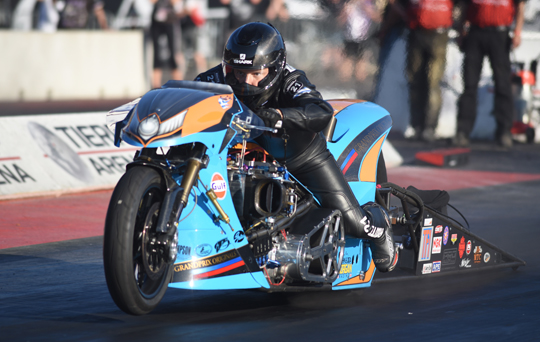 The Tierp Internationals was probably the best race in Top Fuel Motorcycle ever seen in Europe with record setting performances from Filippos Papafilippou and Rikard Gustafsson. The Greek rider claimed the win and the European record and is the leader in the title race. 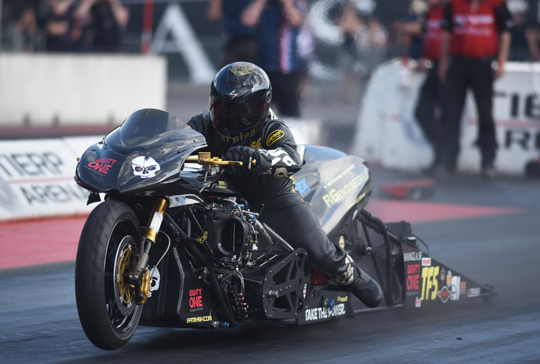 It’s not realistic to expect new record setting performances at a new track like Kauhava, but the fight between the two fastest Top Fuel Motorcycle riders in Europe will definitely go on in Finland. 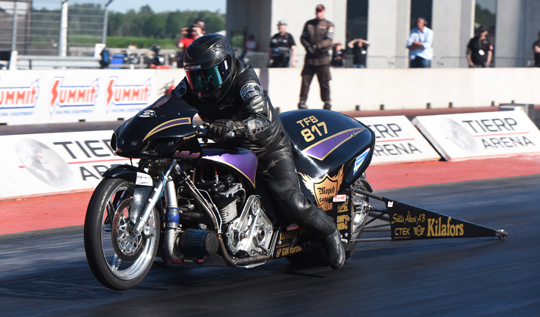 Thomas Pettersson is the number three in the championship and on a new track which will be unfamiliar for almost all riders, the reigning champion might have an advantage over the Top Fuelers with his less powerful but still fast and consistent Funny Bike. Jan Sturla Hegre is the number four in the championship and with his riding skills this racer from Norway is always a force to be reckoned with. 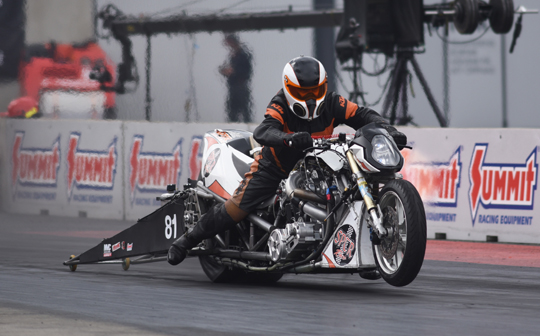 After a long break Dutch former Super Twin Motorcycle rider Willem Been was back in Tierp on a Jaska Salakari built KTM Top Fuel Motorcycle. Although Been had to deal with some mechanical problems, the combination proved that it can be quick, as we know about all Salakari built bikes. At Kauhava the Dutchman will be accompanied by two more KTM’s, Vesa Lipponen and the master himself, Jaska Salakari. It will be very interesting to see what these three Finnish motorcycles can do against the established top three Top Fuel Motorcycles. With seven Top Fuelers on the entry list, nobody has to worry about qualifying for the eliminations. 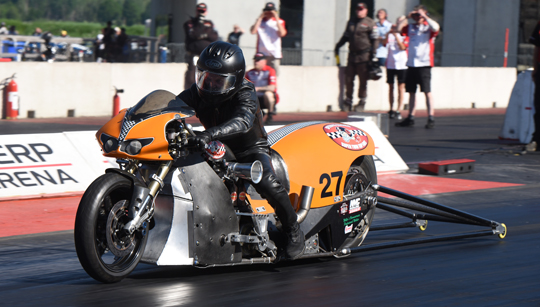 Who can beat the reigning Super Twin champion?

That will be different in Super Twin Motorcycle as there are eleven entrants for an 8-bike ladder. Marcus Christiansen is the reigning champion and the Dane started his title defence with a win at Tierp Arena over Gert-Jan Laseur. 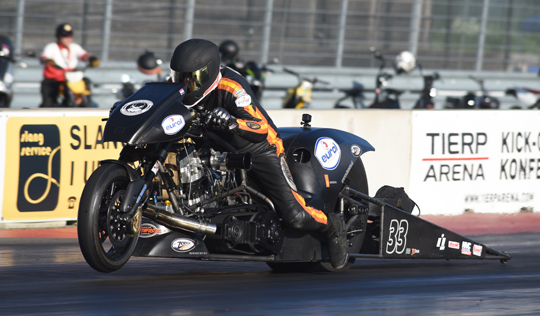 The Dutchman surprised Tommy Grimes in the semifinals in Sweden and will be back in Kauhava to try to claim his first EDRS Pro Nordic MC and FIM Super Twin victory. Grimes is the number three in the championship, but the former champion who recorded a stunning 6.19 seconds at Tierp, will skip the Kauhava round. The Finnish fans will have plenty to cheer for as there are no fewer than five riders from Finland on the entry list. 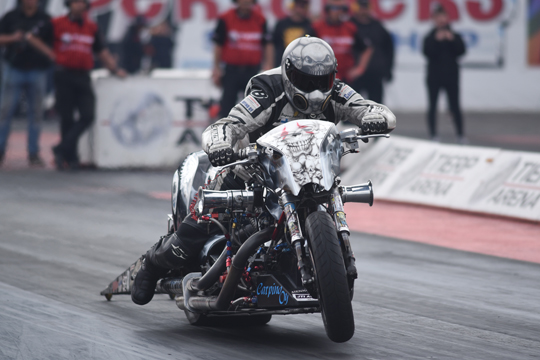 First of all of course the always spectacular Samu Kemppainen and Harri Piensalmi, but Teemu and Torsti Kettula can surprise as well. Aku Lantto will have his first race of this year’s EDRS Pro Nordic MC at Kauhava. 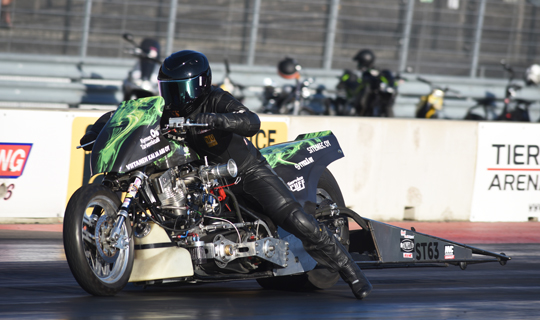 Multiple FIM European champion Martijn de Haas made some major steps with his new bike at Tierp and will now try to win some elimination rounds. Hans Olav Olstad had some bad luck at Tierp and will be out for revenge to prove his real form. The same is true for Greger Johansson from Sweden and Roman Sixta, all the way from the Czech Republic. 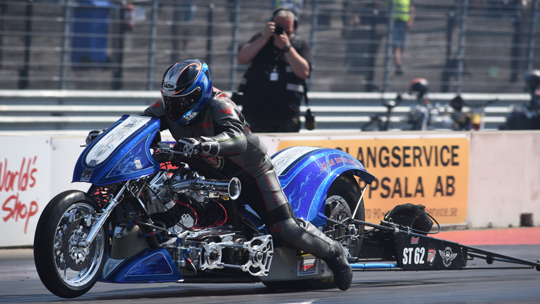 Sixta suffered mechanical problems in qualifying at Tierp and although he was qualified for eliminations and the team did everything they could to be back in time, he was not able to start on the Sunday. 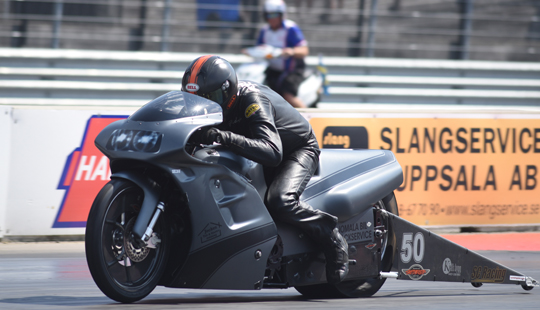 Kalle Lyrén was the winner at Tierp, reset the European record and is the leader in the championship. But the Swedish rider will not be in Kauhava to defend his number one position. Business commitments force Lyrén to race a limited programme this season. Because of this, Pro Stock Motorcycle only has three entrants for the Kauhava race. Fredrik Fredlund is of course the clear favourite as the multiple FIM European champion proved his great form in his comeback race at Tierp. 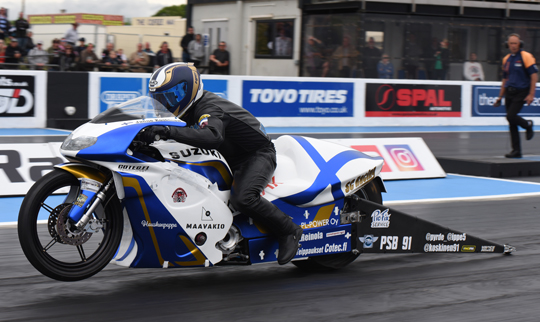 Janne Koskinen is also on the entry list and although it looked like his season was over after his finish line crash at Tierp, the Sweet Cheek Racing team did a great job by repairing the bike in time for Kauhava, thus the young Finnish rider will be back on track in his home country. 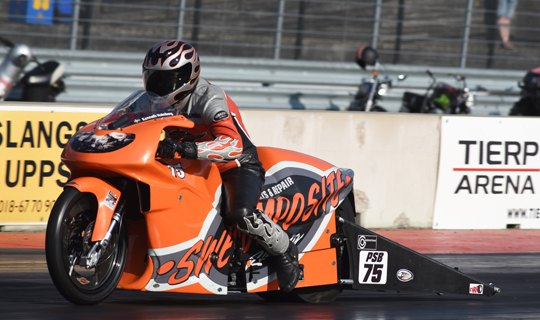 With the absence of Lyrén, Swecomposite rider Kenneth Holmberg is the only Pro Stock Motorcycle rider from Sweden who can prevent a Finnish win. 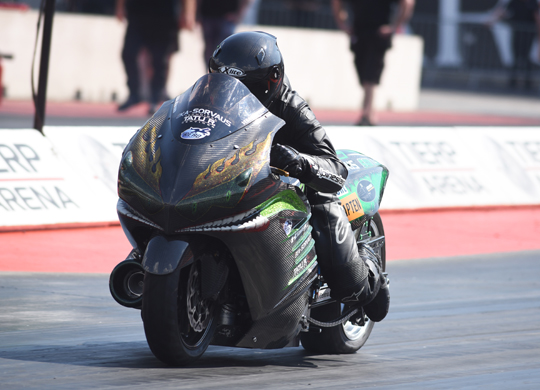 In qualifying at Tierp Arena he was struggling, but at the moment the points were awarded Vesa Ruhanen was back to form, he won the eliminations and is the proud leader when the Super Street Bikes start their Finnish round of the championship. 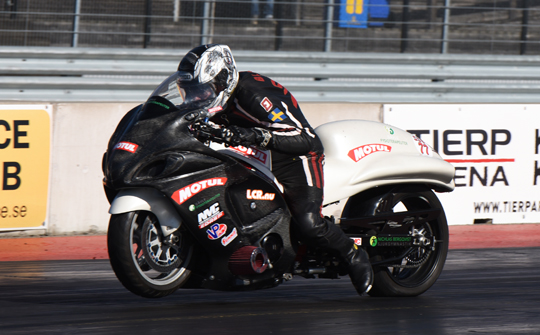 Anders Blanck proved his speed but at the most important moment, in the final, he had a mechanical problem and couldn’t start. With her new bike Ida Zetterström smashed her personal best at Tierp and don’t be surprised to see the number three in the championship advance to the final or even win her first SSB race. 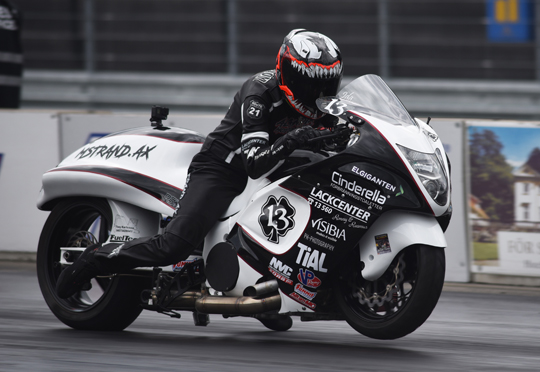 Dag Wagenius and the extremely quick, but in the Tierp eliminations struggling with traction Mathias Bohlin, are the numbers four and five in the championship, but they will skip the Finnish race. But still there is enough competition for the top three in the championship. 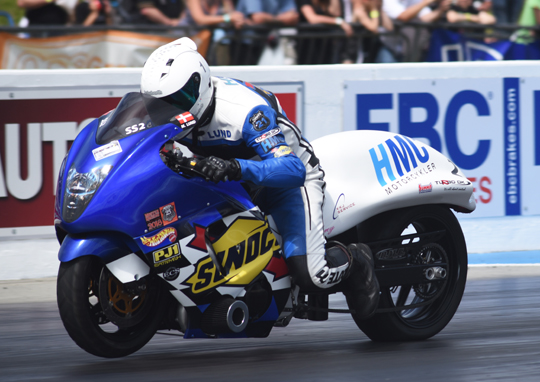 First of all there is Mogens Lund from Denmark, the former champion and a frontrunner in every championship he takes part in. Dániel Donát Lencsés is a force to be reckoned with as this rider from Hungary is one of the leading riders in the FIM and British series. 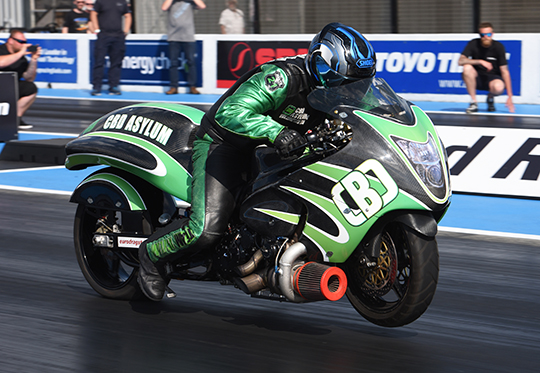 From the UK come Alex and Mark Hope. Alex won the first FIM round in Hungary and finished the 2018 EDRS Pro Nordic MC in fourth position. Stephan Mead is another quick rider from the UK who can surprise. Kimmo Pulakka is the third Finn on the entry list and Robert Häggblom the only SSB rider with a Swedish licence at Kauhava. 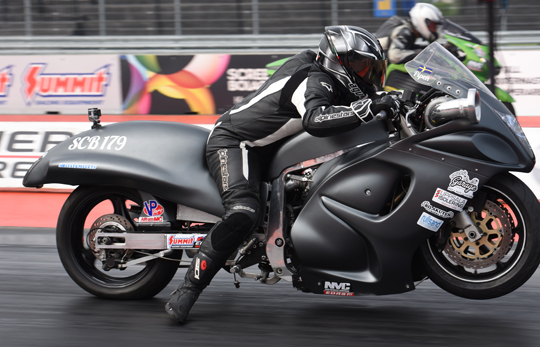 Rasmus Östlund was the winner in Super Comp Bike at Tierp, but the leader will not be in Finland and that gives reigning champion Peter Östlund the opportunity to take the lead in the championship after two races. The Swede is the only non-Finnish rider on the entry list and he will have to beat nine home favourites to claim the win. Hanski Koskela, Heikki-Juhani Koskinen, Petri Koivuniemi, Kimmo Hamari, Topi Pajula, Juha Herva, reigning Super Gas Bike champion Jami Oksanen, Kim Oksanen, and last year’s runner-up in the championship Kimmo Rantala will have their first EDRS Pro Nordic MC Super Comp Bike race of the season and can score some valuable points. 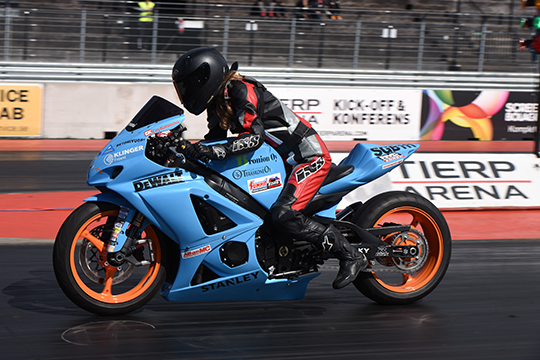 In Super Gas Bike one thing is for sure, there will be a winner from Finland crowned at the end of the weekend. There are ten entrants on the entry list and they are all from Finland. Trygve Kaerstad Helgerud claimed the victory in Tierp, but the rider from Norway will not defend his leading position in Finland. That gives runner-up Jenni Pekkarinen the opportunity to take the lead at the halfway point of the season. Jani Heikkonen, Juha Komulainen, Jari Malinen, Nico Verronen, Jussi Hänninen, Viivi Ollikainen, Roope Vihreäsaari, Niko Rosendahl and Jyrki Sinisalo are the other nine riders that will fight for a win in Kauhava and claim their first points for the 2019 EDRS Pro Nordic MC.