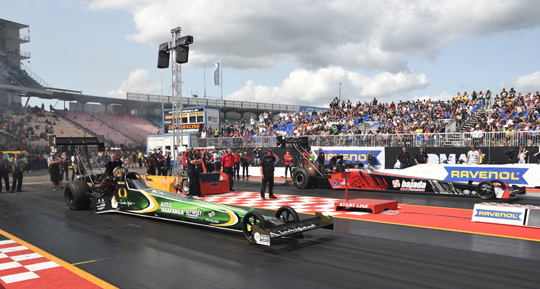 The 2018 FIA European Drag Racing Championship is at the halfway point of the season and after the summer break part two kicks off in high gear with in back-to-back weekends the NitrOlympX at Hockenheim in Germany and the Summit Racing Equipment Internationals at Tierp Arena in Sweden. For the drivers and teams not only a tight schedule, but in seven days the standings in the FIA European Championship can change dramatically. Anita Mäkelä (Top Fuel), Timo Habermann (Top Methanol), Stefan Ernryd (Pro Stock) and Jimmy Ålund (Pro Modified) are the leaders in their respective categories, but as past performance is no guarantee of future success, everything is still possible before Europe’s most prestigious drag racing championship heads to its grand finale early September at Santa Pod.

Round four of the championship is from August 17 – 19 at the Rico Anthes Quartermile of the HockenheimRing, and one week later (August 23 – 26) the state-of-the-art Tierp Arena hosts round number five. Two great events with a totally different character; the NitrOlympX with its special atmosphere of the Motodrome and Night Show, and Tierp Arena where it’s all about the sport of drag racing at a record breaking track. 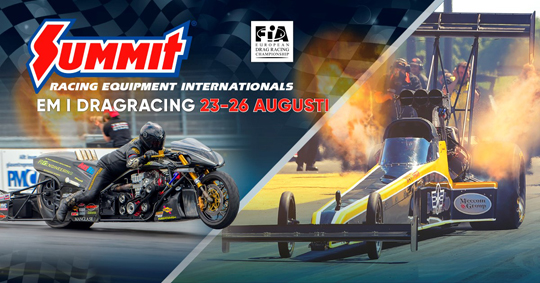 The highly regarded and deeply in drag racing involved American company Summit Racing Equipment have affiliated themselves as the primary sponsor of the Tierp race and with, all sportsman classes included, more than 320 competitors on the entry list, the Summit Racing Equipment Internationals will be one of the biggest European races ever. 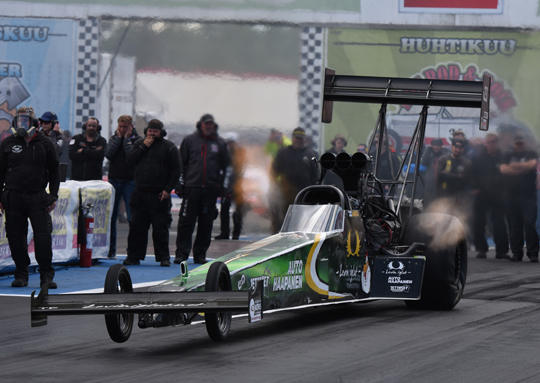 Anita Mäkelä is the leader in Top Fuel after three races. The Finnish fan favourite and 2016 FIA European champion was the winner at Tierp in June, runner-up in the opening round at Santa Pod and advanced to the semi-finals at her home track Alastaro. 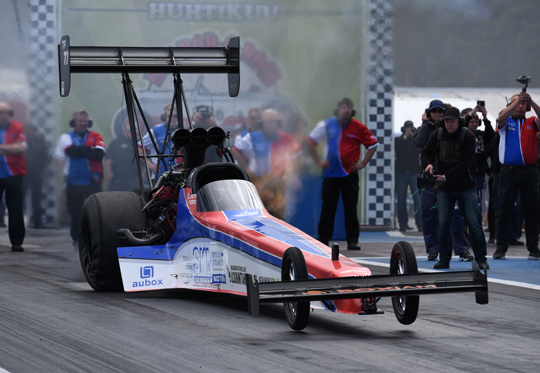 Antti Horto, also from Finland, is already 87 points behind and will need two good results to close the gap to Mäkelä and to be in the title race when they head to the last race at Santa Pod. But Tierp Arena is a track where Mäkelä is hard to beat as she won there many times and reset European records at the Swedish track. Timo Lehtimäki is the number three in the championship, but the surprise winner of his home race at Alastaro will not be in Germany and will resume his season at Tierp. This opens the door for number four in the championship, Duncan Micallef. The reigning champion had a difficult season so far, but a runner-up finish at Alastaro gave the Maltese driver some better prospects for the second half of the season. Micallef is only 14 points behind second placed man Horto, so everything is still possible. 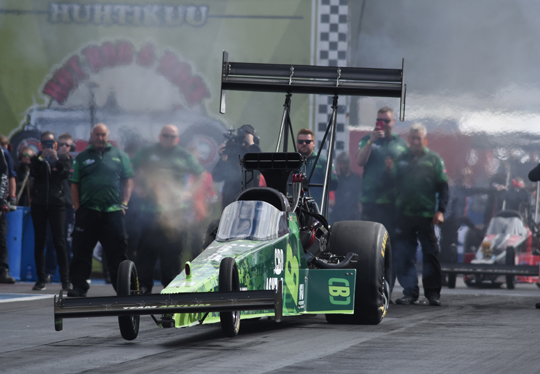 Only ten points behind Micallef is his RF Motorsport team mate Liam Jones. The British driver proved his speed several times, but was unlucky in eliminations so far this season. Mikael Kågered is also not far behind and as the multiple champion from Sweden always scores good results at Hockenheim, he is also a force to be reckoned with. 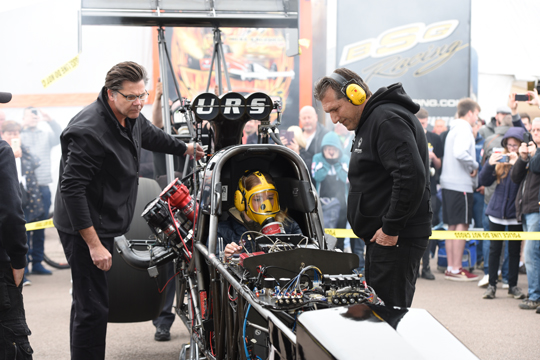 With Lehtimäki skipping Hockenheim, there can still be five drivers left in the title race after Germany. But with a father daughter and a father son combination, these five will get tough and interesting competition at the  Rico Anthes Quartermile. After her Santa Pod Main Event race Jndia Erbacher will be back in action and the 24-year old talented Swiss racer will be accompanied by her father Urs, who will have his first race of the season and can’t be missed at his ‘home track’. Stig Neergaard, winner of the opening round at Santa Pod this season, is also back and will have his son Kenni in the team’s second car. It would make headlines if one of these family combinations could make it to the final. But with nine entrants for an 8-car elimination ladder, they will first of all have to qualify for eliminations, and that would also mean they will destroy someone’s championship dreams. 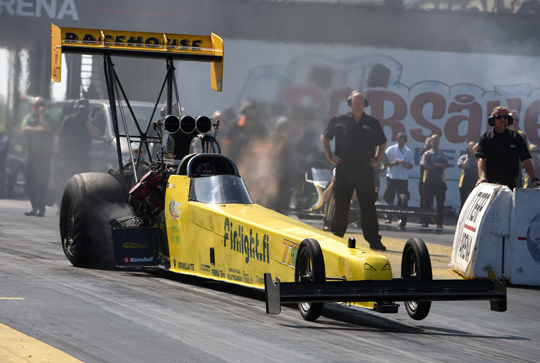 The Summit Racing Equipment Internationals at Tierp Arena will see ten entrants in Top Fuel. The Neergaards and Erbachers will not be in Sweden, but Lehtimäki will be back in action and can once again surprise. The same is true for Stefan Gunnarsson. Björn Mårtensson and Jöran Persåker were also present at Tierp in June and will be back for more. Patrik Pers will have his first race of the season, making 50% of the Top Fuel entry list coming from Sweden. 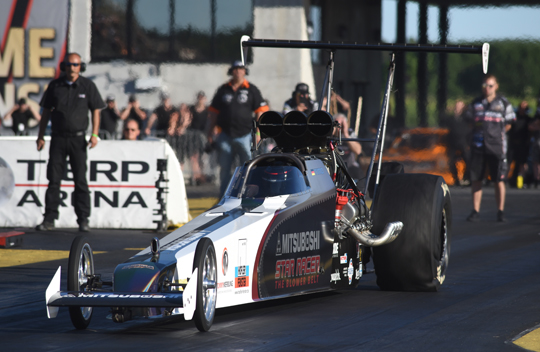 The top five in the FIA European Top Methanol Championship will be present in both Hockenheim and Tierp. So far all three races were won by a Habermann. With Timo Habermann leading the championship after three races, and Dennis Habermann 49 points short of his brother in second position, the German fans have enough to cheer for. 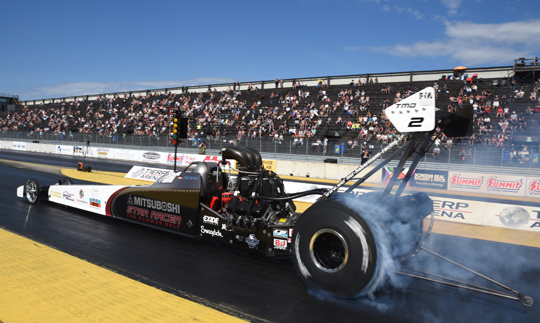 Timo was the winner at Santa Pod and Alastaro, while Dennis took the victory at Tierp in June, but lost some points in the title race with a semifinal exit in Finland. 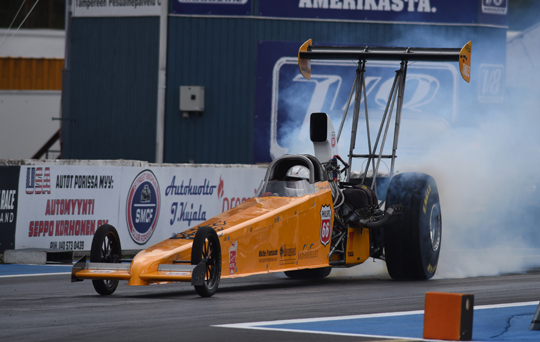 Jonny Lagg is the number three in the championship, and as the 2016 champion reset his personal best several times this season, the Swede is closing the gap to the elapsed times so far recorded by the Habermann brothers. Sandro Bellio is the number four in the championship and the quickest and fastest Funny Car driver in the field. The young Belgian driver made a spectacular entrance in the FIA European Top Methanol ranks last year, but had a difficult start of the 2018 season. At Alastaro the family run Monte Carlo was back to form and Bellio scored a runner-up finish. Although the number one position in the championship is far away, a Bellio never gives up and so Sandro will do everything he can to beat the dragsters and win races. And if they have solved all tyreshake problems, don’t be surprised to see European records fall at Tierp. Mikael Larsson is the number five in the championship, but in his first full FIA season the Swede is struggling will several problems. Hopefully the Swedish team could solve their problems during the summer break and can reset personal bests again. 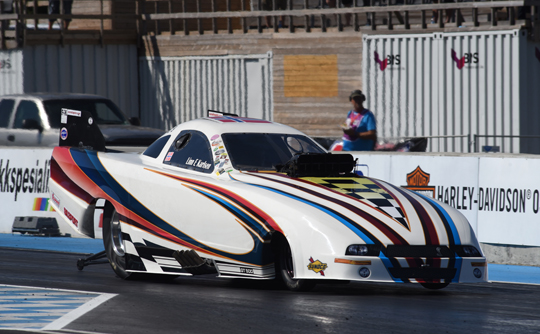 At Hockenheim the top five in the championship will be accompanied by the two Funny Cars of veteran driver Jürgen Nagel and Linn Engan Karlsen. The young Norwegian racer made some steady progress and tested her Mustang at her home track Gardermoen Raceway a few weeks ago. Nagel will not be at Tierp, but in Sweden Ari Pietilä from Finland will resume his season, making the Top Methanol field to seven. Petteri Liimatainen, the 18-year old TMD driver from Finland who had to skip the first part of the season after a road accident at home, is also on the entry list, but will not be able to race at Tierp. 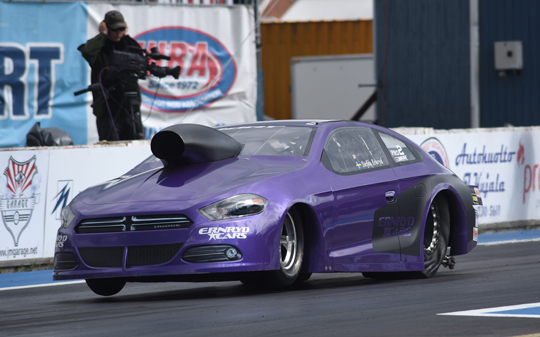 After his victory at Santa Pod and runner-up finish at Tierp in June, Stefan Ernryd had a comfortable lead in the FIA European Pro Stock Championship. But the Dodge driver had an early exit at Alastaro and as Bengt Ljungdahl took the runner-up points in Finland, the reigning champion closed the gap to the leader to twenty points, only one round win. 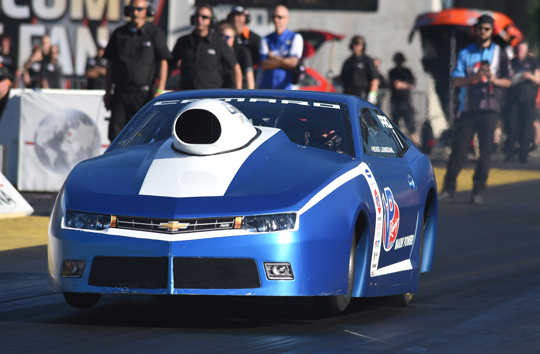 And don’t underestimate Michael Malmgren. The former champion was the surprise winner at Tierp and is only six points short of Ljungdahl in third position. Robin Norén is the number five in the title race. The young Swedish driver will also be at Hockenheim and can always surprise, as he did at Santa Pod with a runner-up finish and by resetting his personal best several times this season. 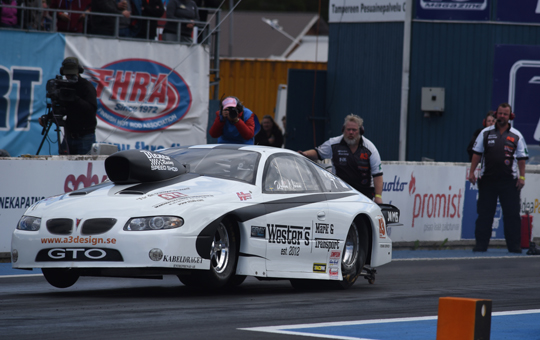 With four drivers, the German round of the championship doesn’t have its biggest field, but at Tierp the factory hot rod category is back to a healthy ten entrants. The four from Hockenheim will be accompanied by Tommy  Leindahl, Thomas Lindström, Magnus Petersson, Sampsa Palos, Christian Sagelv and last but not least Jimmy Ålund. 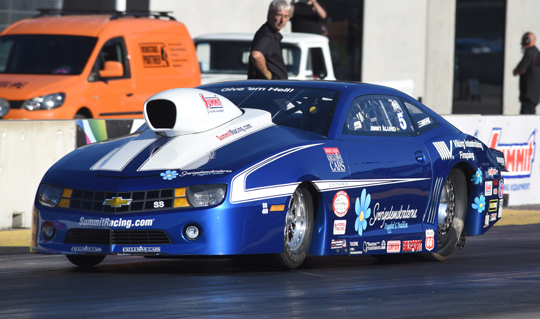 The 10-time FIA European Pro Stock champion was the winner at Alastaro, but because he doesn’t do the full European tour, Ålund is not a title candidate. With his main sponsor Summit as the title sponsor for the Tierp event, Ålund will do everything he can to repeat his double victory from Alastaro, where he won both Pro Stock and Pro Modified as well. 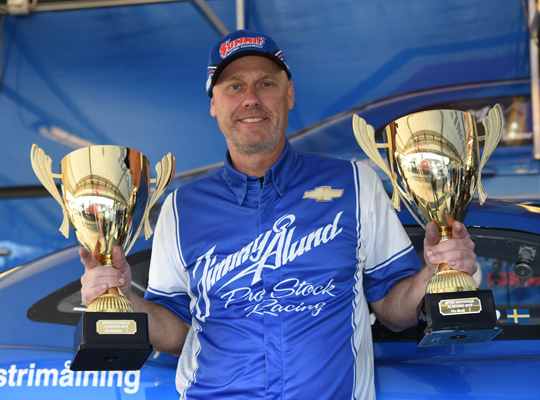 And talking about Pro Modified and Ålund, with two runner-up finishes at Santa Pod and Tierp and a win at Alastaro, the Swede is the leader in Pro Modified after three races. 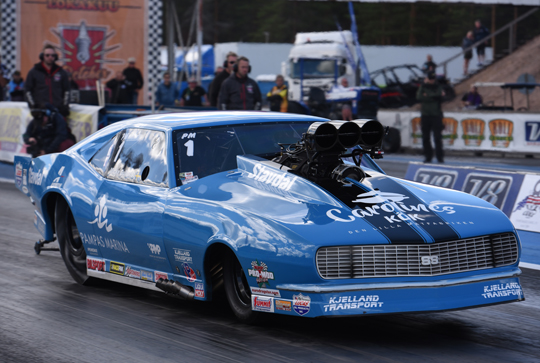 Reigning champion Michael Gullqvist won at Santa Pod, but missed some points at Tierp in June and is 33 points short of the leader in second position. 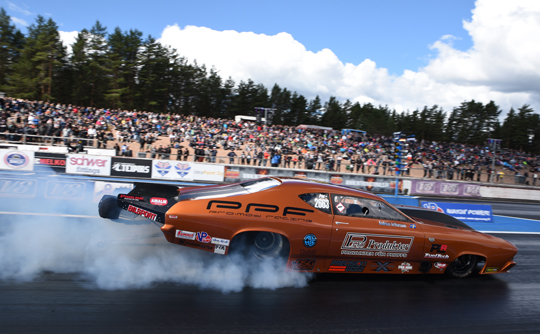 Andreas Arthursson is in third position, but the Tierp winner will not be in Germany and resumes the championship at the track where he was so successful in June. Jan Ericsson, David Vegter and Kim Kristiansen are doing the full European tour and the numbers four, five and six in the title race will try to improve on their positions at Hockenheim. 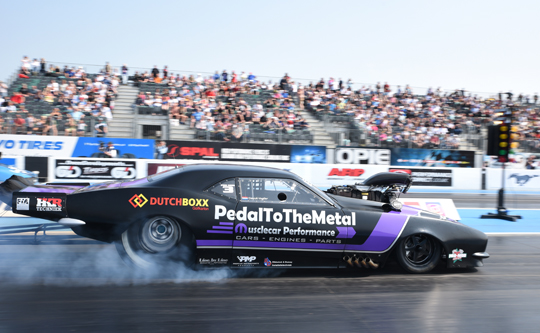 As we have seen before, the entry lists of Hockenheim and Tierp Arena are pretty different. At the NitrOlympX there will be drivers from the central part of Europe and at the Summit Racing Equipment International Swedish drivers dominate. Drivers doing both races are nitrous wizard Roger Johansson and Dutchman Michel Tooren. The Pro Dutch Racing driver crashed his Cuda before the start of the FIA European season, tried his luck in the British MSA Pro Modified Championship, won a race and is now back in the FIA series. 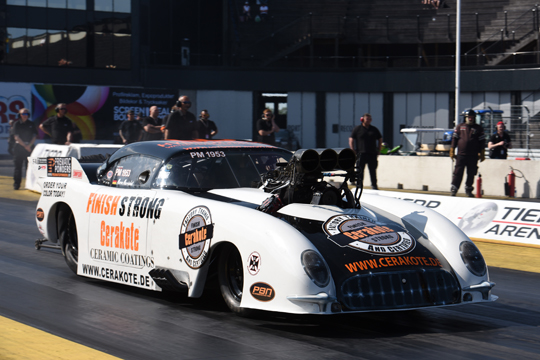 At Hockenheim we see Norbert Kuno and Marco Maurischat from Germany, Marcus Hilt, Peter Wacker and Roland Bolleter from Switzerland, Jean Dulamon from France and Andy Robinson from England. Robinson reset his personal best several times this season and is a steady 5-second driver now, so he can destroy some championship dreams. Maurischat recently announced that Hockenheim will be his last race, as he will retire after a career that started in 1991. It’s sad news and the sympathetic German will be missed. Another driver sadly missed is of course Bruno Bader. After his crash at Alastaro, the Swiss racer is still recovering. We wish him all the best and hope to see him back on track as soon as possible. 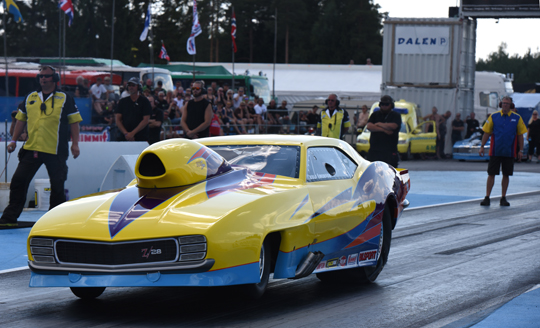 At Tierp Arena the quick Swedish Pro Mods will rejoin the tour. Åke Persson, Fredrik Fagerström, Rolf Simonsson, Micke Johansson and Michael Joneskog are only a few of the drivers who can surprise the title favourites. Lars Järpler is doing very well in his first full season in Pro Mod and also Peter Kunc is making major progress. But also Olof Andersson and Marcus Perman can’t be underestimated. Mikko Saarinen is the only Finnish driver, while Stian Rusånen will have his first official race after the driver from Norway did some licencing runs at the Gardermoen Drag Challenge a few weeks ago. Last but no least there is the welcome return of Mats Eriksson in the championship. After his 2016 runner-up finish in the championship, Eriksson took a break from racing. At Tierp 20 entrants will have to fight for a spot in the 16-car elimination ladder.