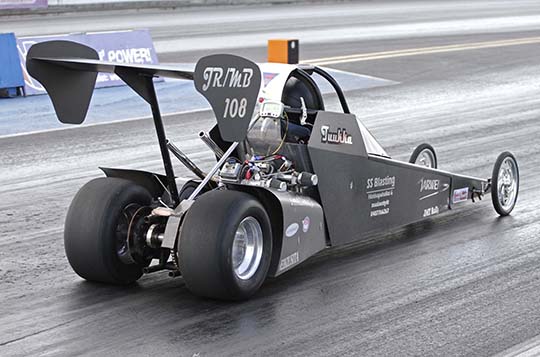 The second race in the Finnish Championship serie and the 7th one in the Summit Racing EDRS Series took place in the middle of June at the sunny Alastaro track. We were happy to see totally 34 junior entrants racing there. In both classes, Junior Dragster and Junior Bike, they were racing by extremely narrow margins by one thousandth of a second.

During the last years Junior groups, both in two wheels and four wheels, have grown one of the biggest Drag Racing groups in Finland. And there’s nothing to wonder about. The younger competitors have really hard races and for them it’s very useful to learn the racing skills, to get used to run on different tracks and gain much experience on the long way to international arenas. We’ve got a couple of good examples of this in Finland: Antti Horto, the second in the Top Fuel group in the European Championship series last year, and Laura Saksa, the world’s fastest female Doorslammer driver have started their career on a Junior Dragster.

As the Junior groups have become more popular we can today see teams that include even more than one racer. Ahonen Racing Team (ART Racing) had five juniors, four Junior Bikes and one Junior Dragster racing at Alastaro Circuit. ART Racing has actually one Junior Dragster more although they didn’t race on it here. 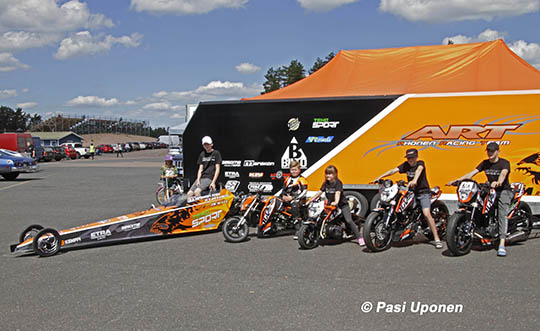 Some of the spectators don’t have the slightest idea of how fast the vehicles in these Junior groups can go. And it doesn’t make it easier that these groups often have to race after the car or bike classes that run significantly faster than them. However, let’s have a look at the image below and at the1/8 mile time made by a Junior Dragster. It definitely shows how fast these vehicles go. There aren’t that many sport cars either that are able to perform a time like this. 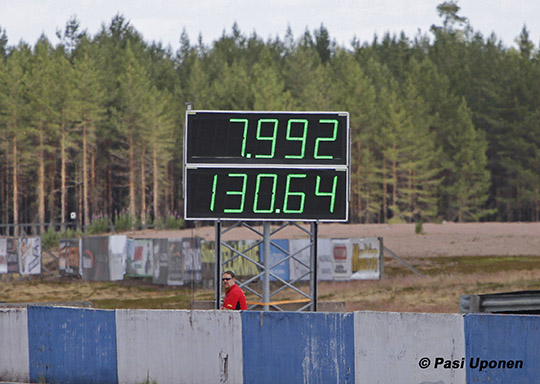 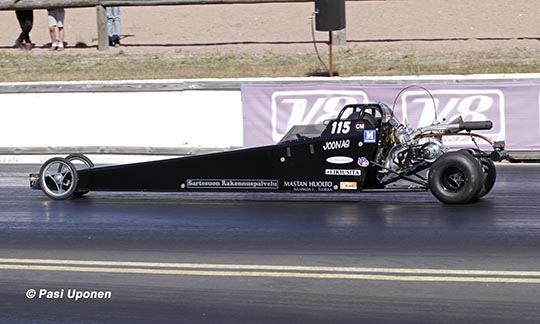 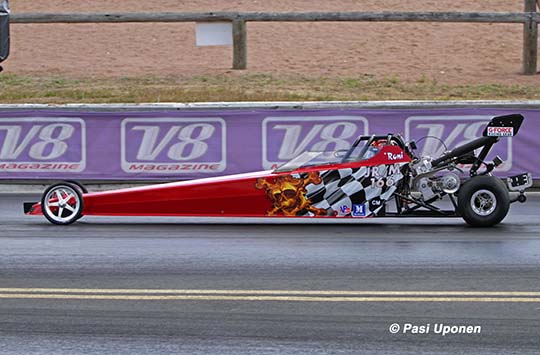 Joonas Laine made his way to the final and was to meet the reigning Finnish Champion Kerttu Lehtonen. She’d already won the the first race in the Finnish Championship series. And Kerttu did a good job again; could hold her nerve at the starting line and took her second win. Joonas instead got a red light and came runner up this time. 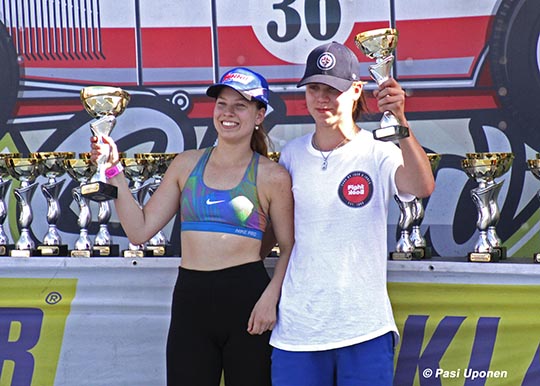 Kerttu Lehtonen (on the left) and Joonas Laine

Despite her young age Kerttu is an expenceried racer and this is her sixth season. One of the secrets behing her success is the fact that she’s been racing on the same vehicle, pink coloured Funny Car for five years. When it comes to her future plans, next year goes the same way, but then she’ll be too old to race on a Junior Dragster, explained Kerttu. She’ll move on to a bigger car. She hasn’t decided yet in which group it could be then, but she thinks Super Pro ET looks quite interesting.

Kerttu’s goal for this season is to win the Finnish Championship series again, and why not, after the first two races she has already taken the lead there. She’d like to attend races in Sweden as well, but the technical rules are different to those in Finland which means that at least on this car she is not allowed to race in Sweden. 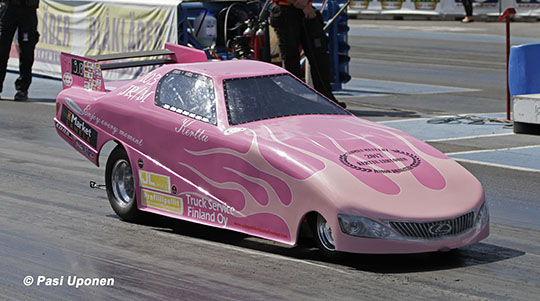 Threre were also 17 entrants in the Junior Bike group and the qualification rounds were tight. However, they ran by larger margins than in four wheels. Finally, Tia-Maria Turunen from ART Racing took the first place by a nice 0,007s reaction time showing that neither the size of bike nor the age of the rider count when you’re fighting for thousandts of a second or when good reactions are needed. The runner up was Niilo Sieppi by a 0,016s reaction time, third was Neea Verronen by precisely same reaction time. 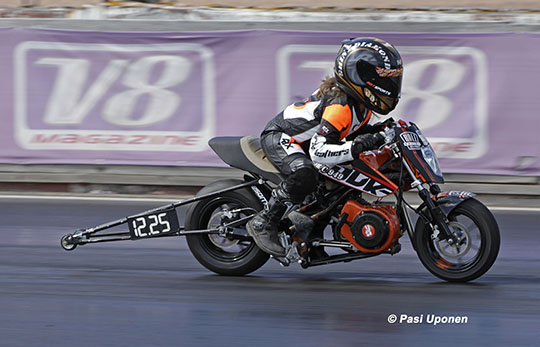 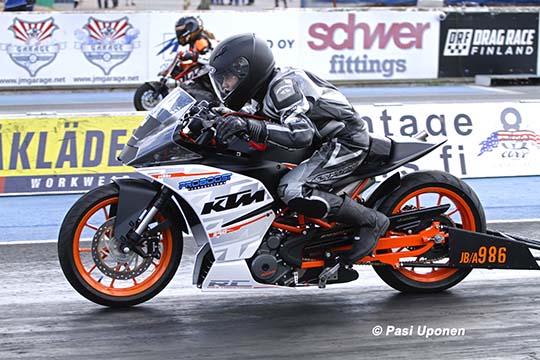 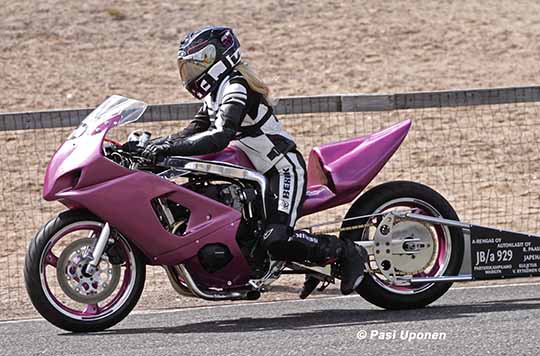 In the elimination rounds Tia-Maria Turunen couldn’t go further than to second round. She did a great reaction time 0,019s but ran too fast beating her own dial-in time by 0,2 s. To the final advanced two racers of the younger generation. They both come from well known teams in Finland: Milo Ahonen from ART Racing and Onni Hyväkkä from Rust Racing. At the starting line we saw two, very different kinds of Junior Bikes, althoug they both were clearly inspired by Twins. Milo’s KTM Duke looks like a smaller version of the world’s quickest Nitro Twin and Onni has got Harley-Davidson Sportster. 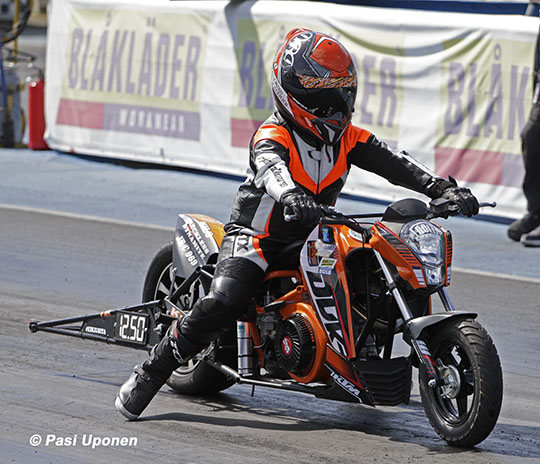 The final was Drag Racing at its best. Both racers managed to run close to their dial-in time by a 0,081s margin, but Onni Hyväkkä got a better reaction time and so he gained an advantage over his opponent already at the starting line. So the winner became Onni Hyväkkä and runner-up was Milo Ahonen. 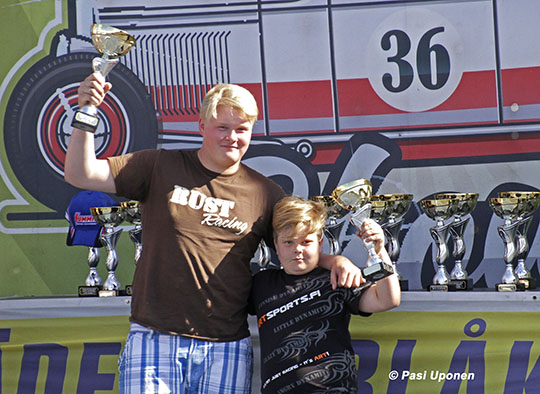 Onni Hyväkkä (on the left) and Milo Ahonen

In addition Onni has been given a hard challenge by Rust Racing. Its team members are pointing on the pure Pro Harley under the same tent on the pit area: They’re smiling cheeky while announcing that Onni could ride on this bike only on condition that he’d win the Junior Bike Championship this year!

But at the moment Onni’s bike is far from Pro Harley. Almost a bit underestimating Onni tells that the bike is almost a standard Sportster. Ignition system and exhaust system have been changed and then they’ve done some modification in the carburetor. It doesn’t give more than approximately 50 horsepower, he thinks. But anyway, that’s enough for the wins in Junior groups. 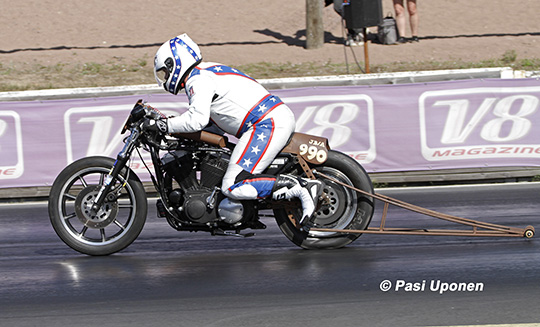 At Alastaro race we could see that there’s a new generation growing up for this sport we all love.

The world’s quickest Nitro-Twin racer Jaska Salakari’s son, Elmeri Salakari, ran his first ever Junior Bike Race. At the same time we saw a kind of come back when Elmeri was wearing his father’s leather race suit, the one that in the 90’s had become his father’s trade mark.

Also Joel Fredlund, the son of the six time European Champion in Pro Stock Bike, Fredrik Fredlund, made a licencing runs at Alastaro on the EDRS Pro Class, Super Gas Bike. There might be a change of generation going on… who knows. 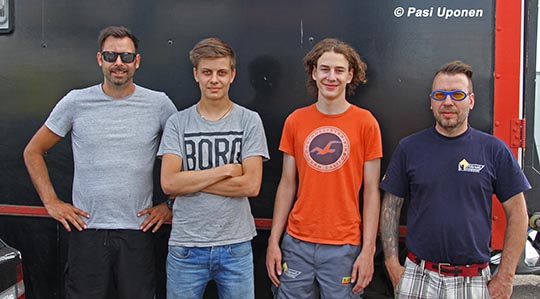 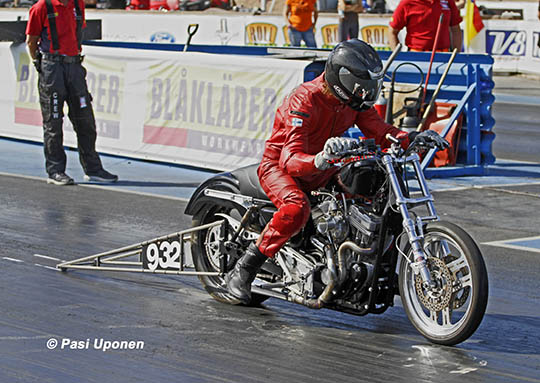 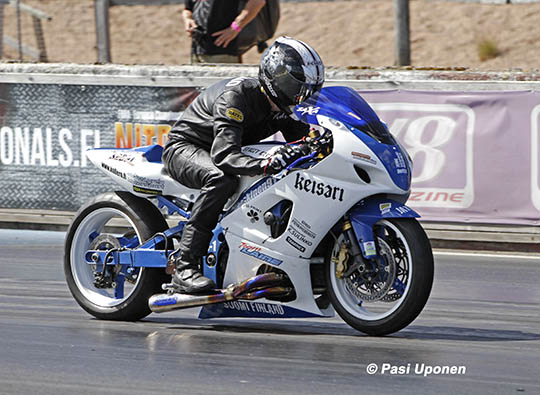