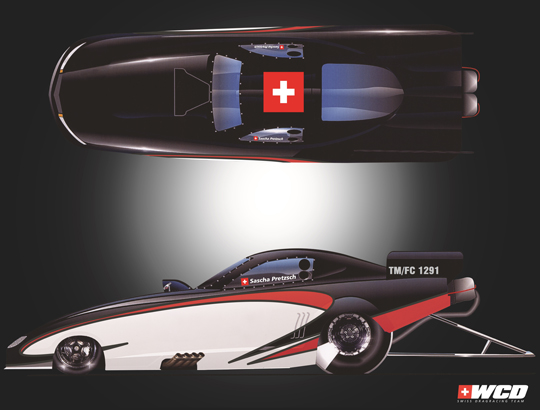 No big announcements, but observant Facebook drag race followers must have taken notice of the short posts about a Swiss racer crossing the ocean to pick up a Top Methanol Funny Car. That Swiss racer was former Competition Eliminator driver Sascha Pretzsch, and yes, he is the new owner of the ex Sir Geoff Goodwin, Greg Hunter driven Synoil Racing TAFC Chevy Monte Carlo. Still a roof, but no doors anymore for Pretzsch, who will make his TMFC debut later this season, to go for a full FIA European Top Methanol Championship assault next year.

Sascha Pretzsch was born in 1976 and lives in the French part of Switzerland. The owner of a company that build and install air conditioning systems, he is probably most well-known for competing with his Competition Eliminator Chevrolet at several European tracks in the last four years. But Pretzsch has a long career in the sport as he started fifteen years ago and entered cars in Super Gas, Super Comp, Pro ET, Super Pro ET and Competition Car. Pretzsch even competed in the NHRA and PDRA competition with the Competition Eliminator Chevy, but his desire to race in the States also marked his recent career switch. “Our race car burned in Jerry Bickel’s Warehouse fire and was completely destroyed. It gave us the opportunity to review the situation and go another way. For the whole team, Funny Car represents the ideal compromise between weight, power, efficiency and performance with minimal electronic assistance and a blown powerful engine,” said Pretzsch about his choice for a Top Methanol Funny Car.

“In late 2017, I travelled to Edmonton in Canada to meet a legend who was inducted into the Drag Racing “Hall of Fame”, Sir Geoff Goodwin. He also was the owner of the #587 Synoil Racing’s TA/FC Chevy Monte Carlo driven by Greg Hunter in the NHRA Championship. In collaboration with Geoff’s staff, I was able to follow a 5-6-day instruction course on how the Funny Car works and on the technical regulations specific to this class. WCD Racing, World Class Dragracing, acquired this complete TMFC operation. The car, clutch, engine and all other parts are recertified and ready to go.” 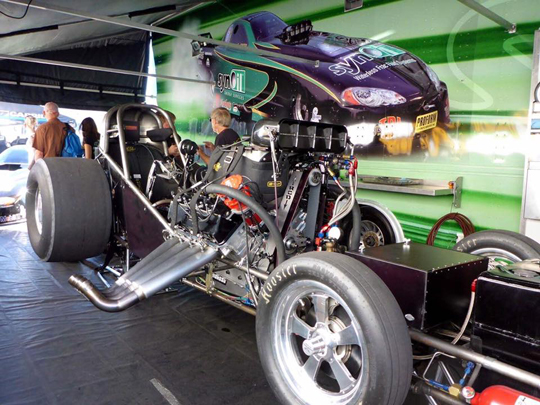 A few weeks ago the TMFC Monte Carlo arrived at its new home in Switzerland, and although race ready, there is still a lot of work to be done. “Yes, especially on logistics and spare parts, etc. We have a big challenge to achieve this year to put this TMFC on the track and make it competitive in the FIA Championship. We would like to do four or even more FIA races in 2019, and a trip to my favorite racetrack in 2018, the NitrOlympX in Hockenheim, Germany, which is my home country. But first of all I have to do my licencing runs, and when the budget is there, we will try to do more races this year.” 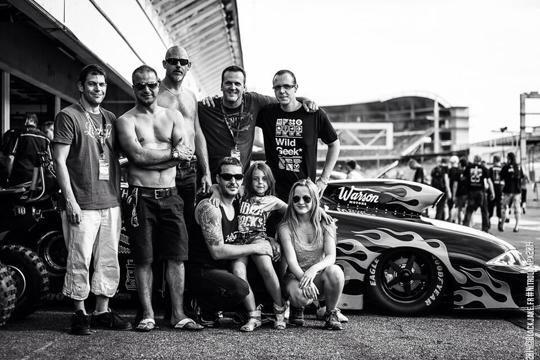 Pretzsch can once again rely on his long time crew. “Most of the crew members have been with me for years and I want to take this opportunity to thank them all. Obviously, we will need some new experience and the help of the big guys of this category. Sponsor-wise we have a few private aficionados who are willing to help us, and the Orllati Group also supports us in this adventure. We are always looking for sponsors or partnerships for this project. Feel free to contact me.”

In the end, Pretzsch would like to thank a few people. “I would like to thank again all the members of my team, my family and friends for being by my side all these years. Another special thanks to Geoff’s staff, especially to Gary Racich, for their help and previous advice. Also, it is with a heavy hand and heartfelt regrets that I write to express my profound sympathies and deepest condolences to Geoff’s family and friends. ‘Sir Goodwin’ who will always be in our hearts and minds, RIP, see you at the finish line.”