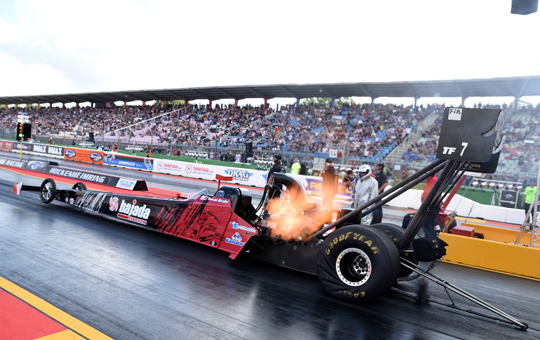 Duncan Micallef from Malta raced to victory in the Top Fuel final of the NitrOlympX, round four of the FIA European Drag Racing Championship at the HockenheimRing, Germany. It was the third consecutive win for the driver from Malta this season. Micallef defeated Jndia Erbacher who advanced to the final in her first Top Fuel race ever. In Top Methanol home favourite Timo Habermann had a bye run in the final when Sandro Bellio suffered mechanical problems short before the start of the run. Reigning champion Michael Gullqvist was the winner in Pro Modified, while in Pro Stock Stefan Ernryd won his first FIA European Championship race after defeating championship leader Bengt Ljungdahl.

It was a great day of racing with exciting eliminations and great elapsed times at the Rico Anthes Quartermile of the German HockenheimRing. 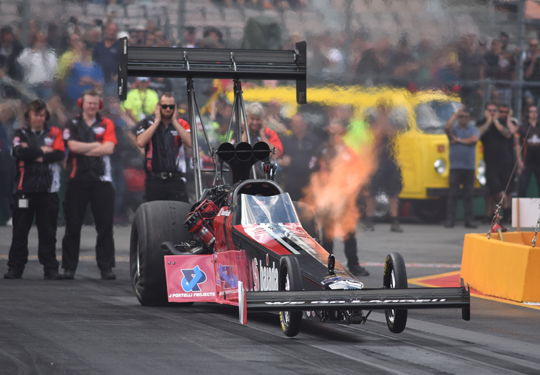 In Top Fuel FIA European Championship leader Duncan Micallef from Malta was the big winner of round four of the FIA European Championship. The Rune Fjeld Motorsport driver defeated reigning champion Anita Mäkelä in the first round in 3.99 seconds, the first 3-second run of the weekend, while Antti Horto and Stig Neergaard, the numbers two and three in the championship, both lost their first round. In the semifinal Micallef recorded 3.96 seconds to defeat number one qualifier and RFM team mate Liam Jones (3.99 seconds) to advance to the final. 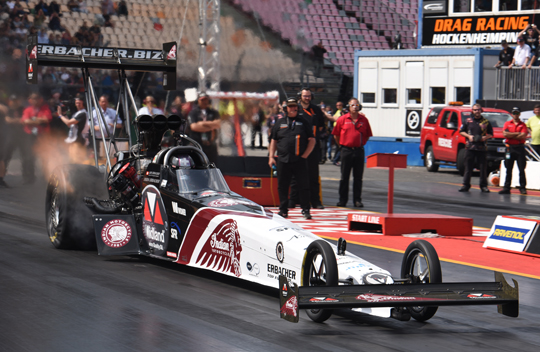 In the final Micallef had to face Jndia Erbacher, the rookie Top Fuel driver from Switzerland. Erbacher surprised former champion Michael Kågered in the semifinal and advanced to the final in her first official Top Fuel race. 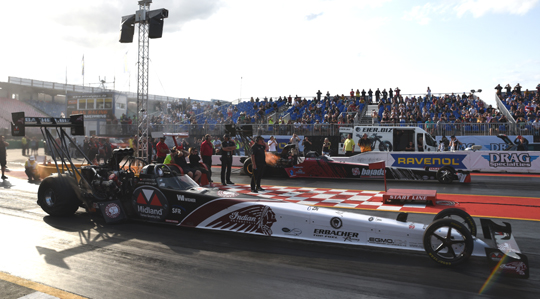 But in the final Micallef once again proved his great form and with 3.99 seconds, the Maltese driver recorded his third 3.9-second in a row. Micallef extended his lead in the championship and is still undefeated this season. 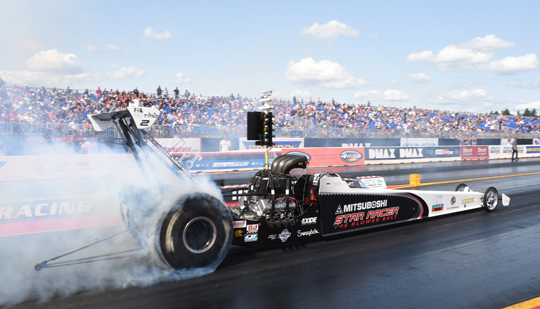 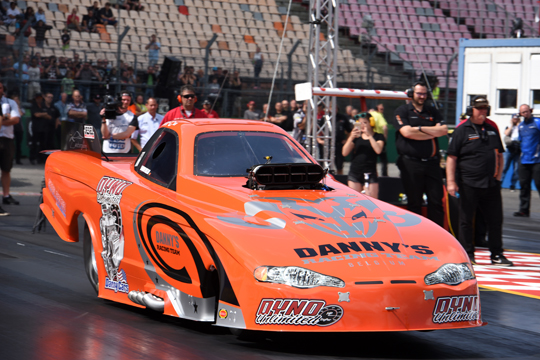 Sandro Bellio, the number two qualifier, stormed to a stunning 5.50 seconds in the semifinal to defeat Dennis Habermann. This was a new personal best for the young Belgium driver, who won his debut FIA Top Methanol race at Tierp Arena in June. 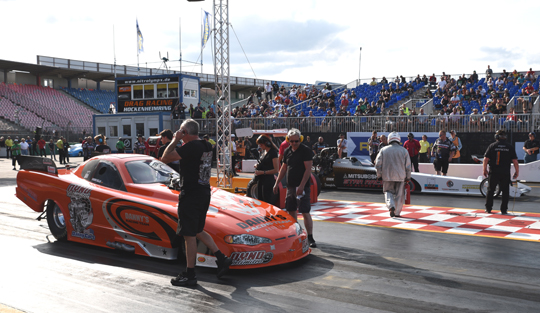 But in the final Bellio had to shut off his Funny Car after the burn out when the crew saw there was something wrong with the engine. 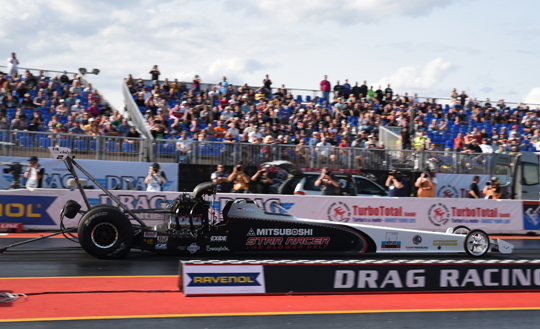 In a bye run Timo Habermann stormed to a great 5.30 seconds to take the win in his home race and extend his lead in the championship. 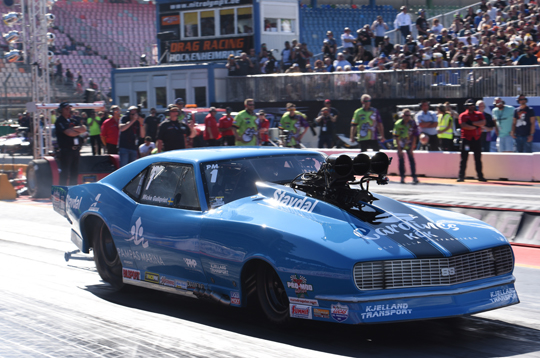 There was a major upset in the first round in Pro Modified as David Vegter, the number two qualifier and number two in the championship as well, pulled a red light. Number one qualifier Jimmy Ålund didn’t make a mistake and advanced to the semifinal, where the 10-time Pro Stock champion had to face Michael Gullqvist. After a difficult qualifying the reigning champion was back to form just in time and defeated Kim Kristiansen in the quarter final in a stunning 5.89 seconds. Gullqvist repeated the 5.89-second run in an extremely close semifinal to defeat Ålund (5.91 seconds). 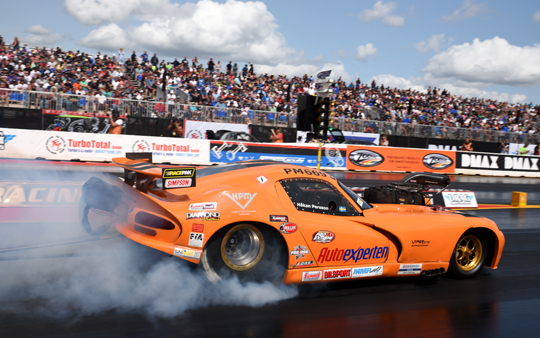 In the final Gullqvist had to face Håkan Persson. It was the first final for the Swede in an FIA European Championship race. With a string of 6.00-second runs, Persson defeated Marck Harteveld and Bruno Bader. 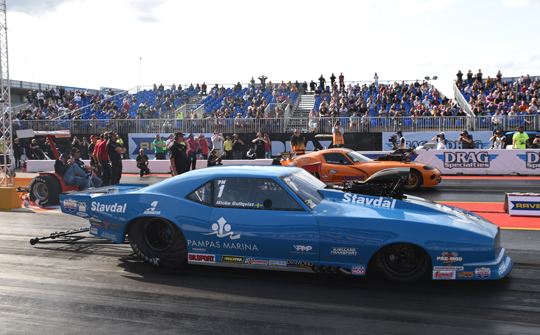 In the final Persson once again recorded an elapsed time of 6.00 seconds, but this time it was not enough to beat Gullqvist, who recorded a winning 5.93 seconds and extended his lead in the championship. 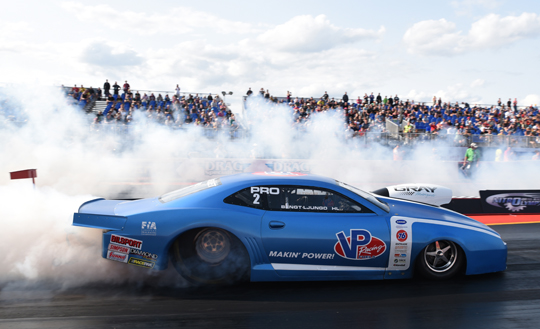 In Pro Stock the numbers one and two qualifiers, Bengt Ljungdahl and Stefan Ernryd didn’t make any mistakes and defeated Robert Norén and Michael Malmgren. 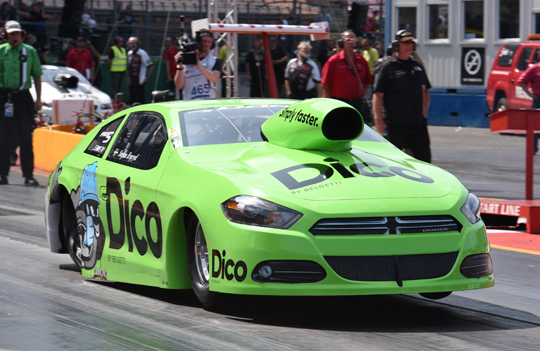 In the final Ernryd surprised with a win over the so far undefeated 2017 championship leader. It was the first FIA European Championship win for Ernryd since he made his debut in the class last year. 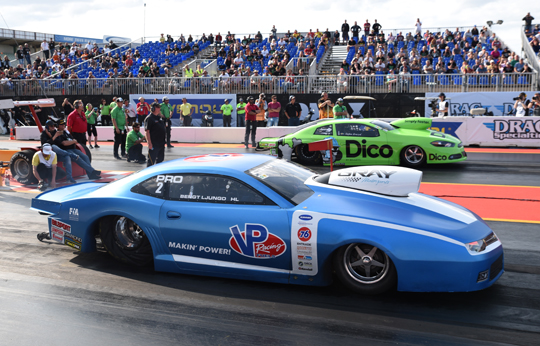