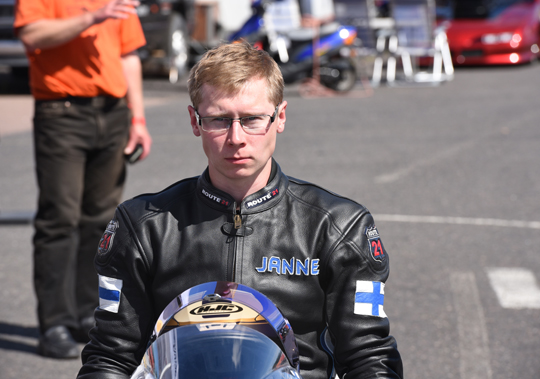 The FHRA Nitro Nationals at Alastaro was Janne Koskinen’s debut in the Pro Stock Motorcycle category of the EDRS Pro Nordic Motorcycle Championship. The 2016 EDRS Pro Nordic MC Super Gas Bike champion was well prepared and after some promising runs in his licencing process, the young Finn was ready for qualification and eliminations. But in racing not everything goes according to plan and Koskinen ended the FHRA Nitro Nationals in hospital. A sad moment for a true and dedicated racer and his team.

With two Super Gas Bike titles to his credit, including the first ever EDRS Pro Nordic MC Super Gas Bike championship last year, Janne Koskinen from Lempäälä, Finland, and his team Sweet Cheek Racing purchased the former Ellsa Karlsson Suzuki to step up to the Pro Stock Motorcycle category. The debut for the 25-year old Koskinen was scheduled for his home race, the FHRA Nitro Nationals at Alastaro, round two of the EDRS Pro Nordic Motorcycle Championship. 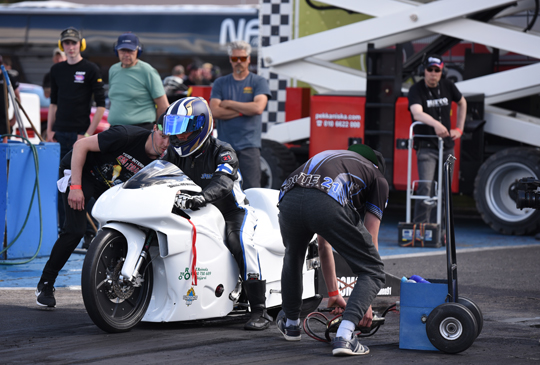 “Before the season started we had a lot of work with the bike, as everything was new to us. But still, when the time came for the first launch, we found parts that were incorrect or needed to be repaired. The best thing with Pro Stock Motorcycle is that everyone helps new teams to get things started, and we really got that help. Absolutely great,” Janne Koskinen said of the start of his Alastaro adventure. 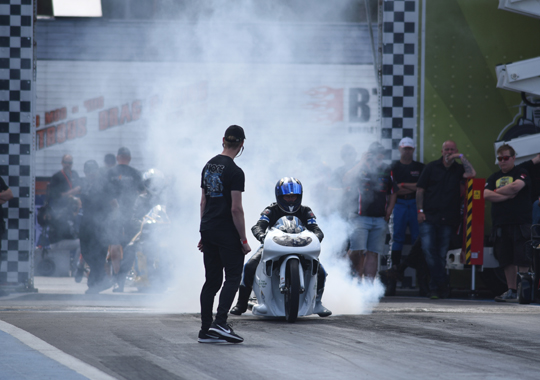 “The first licence run was confusing. We practiced the start line routines with Timo Savolainen, which was really important for my confidence, and it helped me with my first real run as well. The first licence run went okay. I didn’t make any major mistakes and controlled the bike from the engine start to the engine stop, as I was supposed to do. We had some issues, as we lost one cylinder at the burn out. Before the first run people asked me for days “are you scared yet?”. But no, I wasn’t. I was really focused. I would not say that I wasn’t scared at all before that first start, but the main thing as a rider is that you can deal with the feelings and focus on the important things. Yes, my heart rate was up at the time, but I think a rider must have a little tickle before every start.” 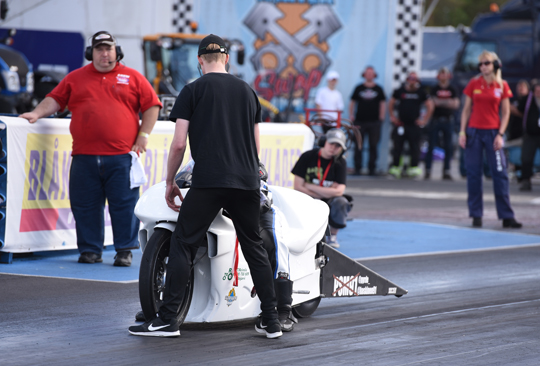 That was the end of the first Pro Stock Motorcycle race day for Sweet Cheek Racing and the mechanics  started to search for the problem with the dropped cylinder. The crew found an issue with the coils and because they didn’t have a spare, they borrowed a set from Hope Racing. But that was not the only problem to advance to the official qualifying. “In the evening the scrutineering inspectors told me that my elapsed times weren’t even close to good enough to get a licence, and that I had to make a 7-second run the next day. We had a long discussion about the rules, because, as far as my team knew, there were no rules of how quick and fast I should be able to run. I was told that it was because of safety and that it would be dangerous when some riders would be dramatically slower than others. I understand that safety is the most important issue, but as a rider you shouldn’t be confronted with a confusing point regarding licencing at such a late moment. I’m not the kind of guy that only complains, so I’ll draw up a proposal of how to avoid confusion and make licencing more clear for all parties involved.” 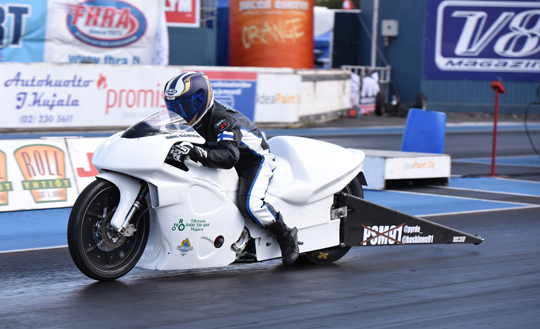 “On Friday we got the permission to go out for a licencing run early in the morning, just after the Funny Bikes. I felt really focused and determined to make a good run. This time we had all cylinders on. All start line routines went well and I had a good feeling. The bike felt good from start to finish and I was forced to drive it little bit more than we liked. After the run the feeling was intoxicating. Then my crew chief came with the time slip and he looked happy, 7.776 seconds at 268.72 km/h! We got the licence!” 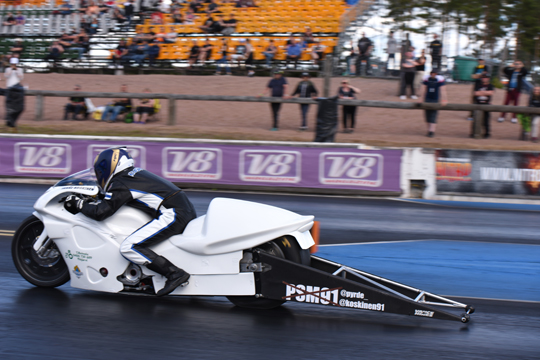 The first qualification round on Friday didn’t go as expected. The bike went hard to the right and Koskinen had to abort the run and rolled to the finish to have at least an elapsed time. The second run was late Friday afternoon. “We knew that there was a hard wind from the right and we had a discussion with the team and other, more experienced riders. We agreed that I would drive to 200 meters with quick gear changes and then pull the clutch in and the throttle off. But the wind caught the bike and when it started to go towards the wall, I tried to steer too much like a ‘round tire bike’ and leaned it. I went to the wall and hit it.” The medical team responded immediately and so the unlucky Koskinen was in good hands and was taken to the hospital. “At this point I can tell that recovery has started quite well. My wrist has been in surgery. My left knee is broken and my calf bone too, but there was no need for surgery. Our season with the Pro Stocker is over, but I will come to the remaining EDRS Pro Nordic MC races with the other teams.” 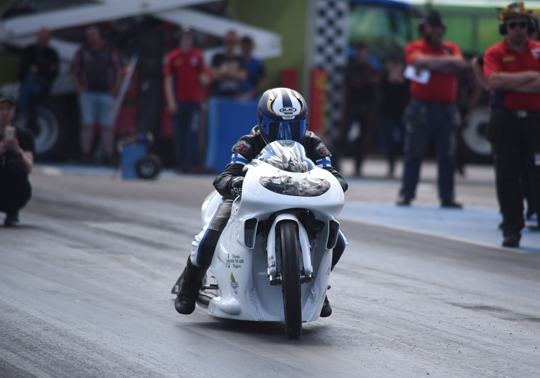 Janne Koskinen has a critical note about something that happened immediately after his crash. “First of all I want to thank the doctor and the ambulance paramedics who were first on site. Also all the other medical experts that took care of me. They did a great job. But the thing that bothers me, was the audience reaction. When I had hit the wall and dropped from the bike, the live stream personnel did exactly the right thing, and shut off the stream. When the medics came by me, the track crew raised up some curtains. We are not living in the year 50 BC and it is just a metaphor that we are today’s gladiators. Accidents are part of the sport and there will always be accidents. When something bad happens, it is not part of the show anymore. Right after the accident my team and family members started to get phone calls and messages via several applications. That’s not the way I would like anyone’s family members or loved ones to hear of a bad accident. “OMG! Do you know what his or her condition is?” is not the message you want to get from people you don’t even know. Privacy is everyone’s right and they should also get it. In my accident I got away with only a few broken parts, but with this high speed sport I know it can be a lot worse. So the next time I hope for more patience, and that people wait until the information has reached all the closest ones.” 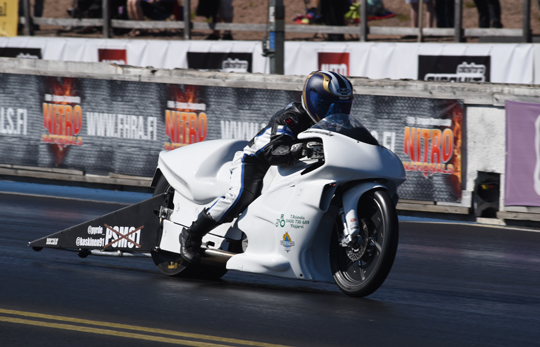