Autosport International is Europe’s largest indoor pre-season motorsport event and will be celebrating its 27th anniversary from 12th-15th January 2017 at the National Exhibition Centre in Birmingham. Drag racing will be represented by Santa Pod Raceway, as the home of the opening and final round of the FIA European Drag Racing Championship has its own stand at Autosport International.

Autosport International encompasses two trade-only days (Thursday-Friday) and also two days for the general public (Saturday-Sunday) and features the very latest in motorsport, automotive and performance engineering technology, alongside cars and exhibitors from every level of motor racing. 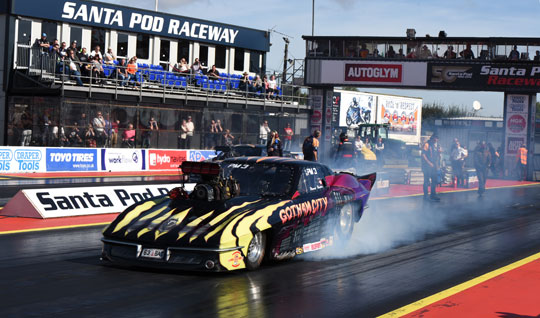 The Autosport International Show at Birmingham’s NEC is Santa Pod Raceway’s traditional launch of the new racing season. Santa Pod’s stand 7460 is located in hall 7 and will be the meeting point for drag racers and drag race fans. Sharing the stand with Santa Pod will be Lucas Oil UK while VP Racing Fuels will also be present on the stand.

There will be several drag race cars on display on the Santa Pod stand, like a Nitro Funny Car recently driven by Sweden’s Patrik Pers and Brad Jackson’s Super Pro ET dragster. Visitors to the stand can also collect a copy of Santa Pod’s 2017 calendar. As many (British) drag racers pay a visit to the Autosport International Show, the Santa Pod stand will be the right place to meet the racers and hear their plans for the oncoming season.