Hansen Racing is handling spare parts and performance parts for American Cars and have done so since 1966. This year they celebrate their 50th anniversary.

Hansen Racing is the oldest and largest company in Sweden specializing in spare parts for US cars, trucks, vans, and marine engines from the aftermarket. They offer a complete line of auto parts, marine parts, exhaust systems, truck and van parts and tools, from America’s best-known manufacturers. Hansen Racing is also the official importer of Gulf lubricants in Sweden.

The company is a family business that was founded in 1966 by Danish born Carl Hansen, together with his wife Sessan and their two sons, Zefir & Mistral. Hansen Racing remains a family business to this day and is run by William, Ken, and Ted, which is the third generation Hansen.

Carl Hansen was very interested in Studebaker cars so he started the company, Studebaker Service, as a hobby. Carl, Sessan, Zefir and Mistral all worked together in the family business importing and selling spare parts for American cars. In the middle of 1960 the Hansen family moved in to an apartment at Stureparken 11 in Östermalm, Stockholm. This became an historic address since it was there Hansen Racing started and held the first Swedish SHRA meeting to set the guidelines for the first official drag race event in Sweden, First Go at Anderstorp in 1968.  A fun fact is that Hansen Racing financed the first time-tree equipment to the “First Go”. 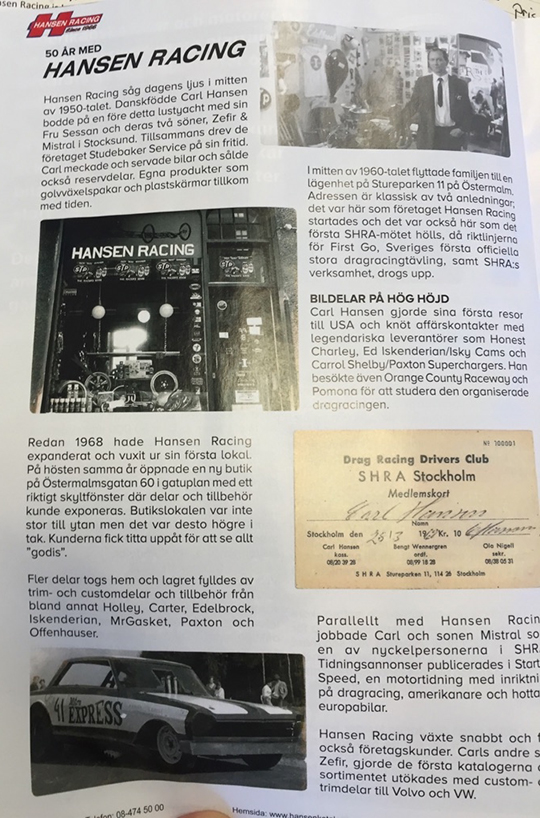 -Dragracing is in our DNA says Mikael Backteman, Sales Manager at Hansen Racing. Our inventory of drag racing parts makes it easier for the drivers to complete their races during the season. We spend a lot of time and effort developing this segment, continues Mikael. We carry a deep inventory of products from ARP, MSD, Moroso, Edelbrock, Aeromotive, COMP Cams, Fel-Pro Performance, Holley, Earls and many others.

-Our team at Hansen Racing is very passionate about drag racing, and have been so from the very beginning. We are very proud to be one of Speedgroups contingency partners and support the racers, says Mikael Backteman.

The contingency awards from Hansen Racing to the winners are 1600 SEK and 800 SEK for the runner-ups.

To purchase the sponsorship from Hansen Racing the teams need to use Hansen Racing products and be able to present proof of purchase. Decals visible on both sides of the vehicle. Claims to be made via Speedgroup. Form of payout is through a gift certificate. If you want to have a chat with the company, you´re very welcome to contact Mikael Backteman at Hansen Racing at +46 (0)8 4745055.