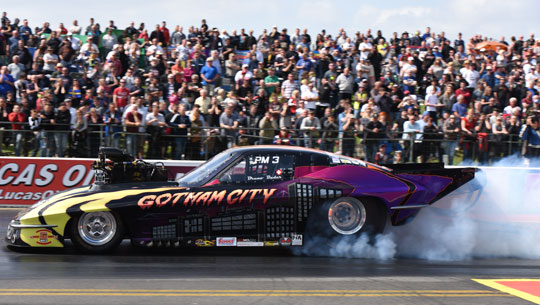 From the very first moment, Bruno Bader was the man to beat in Pro Modified at The Main Event. But nobody could, and so, starting from the number one qualifying position, the Swiss racer reset his personal best in the final, to take the win in the low elapsed time of the weekend, and beat reigning FIA European Pro Modified champion Michael Gullqvist. An impressive performance from the quick and consistent Bader.

The FIA European Drag Racing Championship kicked off with the traditional Main Event at Santa Pod Raceway. With 21 entrants from seven different countries, Pro Modified was the most international and largest Pro class at the opening round of the FIA European Championship. 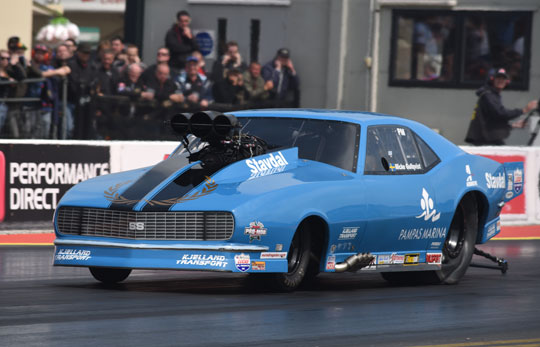 In his second run Bruno Bader stormed to 5.94 seconds, a new personal best and the provisional number one qualifying position. The Swiss racer proved his consistency by running 6.01 and 6.03 seconds, and although many people thought Michael Gullqvist would take over the number one spot on Sunday, the reigning champion couldn’t do it and Bader stayed on top. Gullqvist was the next racer to break the 6-second barrier and was second with 5.974 seconds. 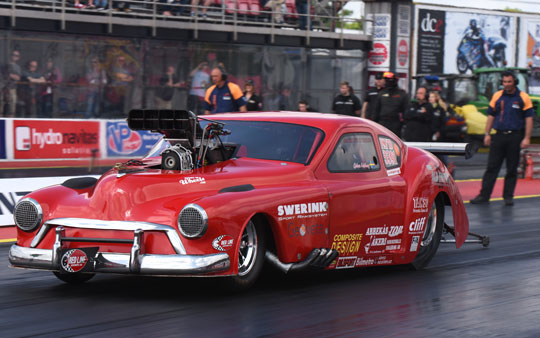 In his first race with The Old ’51, Johan Lindberg had to wait until the last run to break into the 5-second zone, and jumped into the number three qualifying position with 5.977 seconds. Last year’s runner-up, Mats Eriksson, was the first one in the 6 seconds with 6.07, and was fourth. 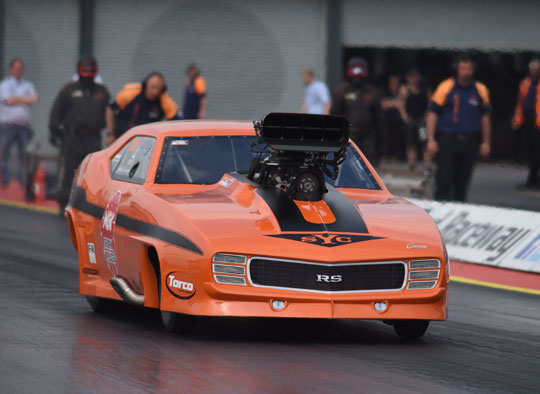 Andy Robinson gave his home crowd something to cheer about after storming to 6.09 seconds in his third qualifying attempt. Dutchman Michel Tooren impressed with 6.16 seconds in his first ever competitive drag race with the Pro Dutch Racing ’71 Plymouth Barracuda. 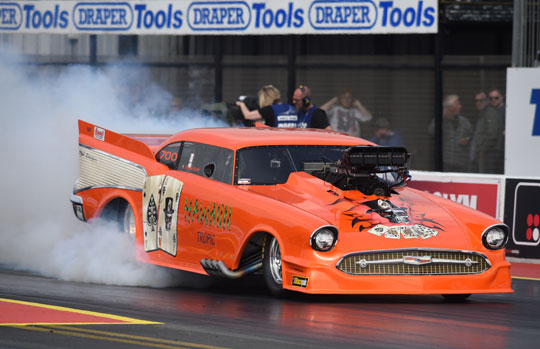 Thomas Stiefel was the second Swiss driver in seventh place, while David Vegter suffered ignition problems, couldn’t improve on his Saturday performance (6.19 seconds), and was eighth. 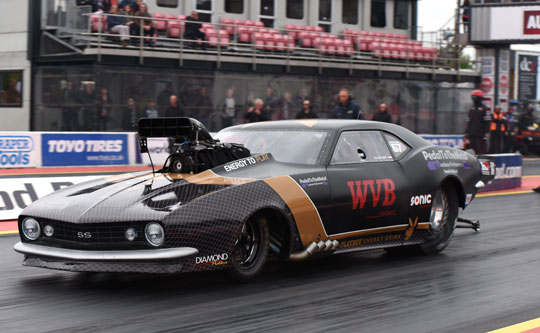 Philip Englefield and Norbert Kuno completed the top ten. Marck Harteveld from The Netherlands stepped up from Super Pro ET and was twelfth in his first ever Pro Mod qualifying. In his first race with the Kuno Racing Avenger, Hussain Al Shammari from Kuwait had some serious problems, but one run in the 6 seconds was enough to qualify fifteenth. Marcus Hilt was first alternate, but knew he could step in for Frenchman Jean Dulamon, who suffered a nitrous explosion in qualifying and had to withdraw from eliminations. 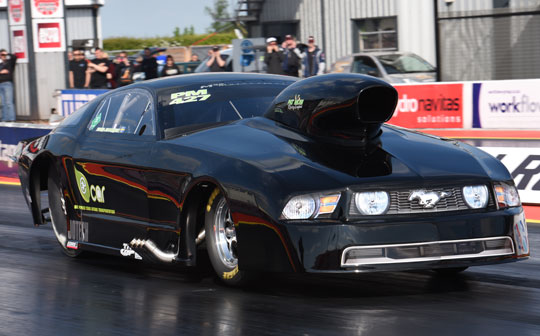 First qualifying was interrupted by Roger Johansson’s horrific crash. His Mustang drifted to the left side of the track, but then suddenly turned hard right to hit the wall almost head on at high speed, just in front of Gullqvist. The Mustang came to a halt near the gravel trap at the top end, where the safety crew carefully extricated Johansson from his car. Johansson was taken to the hospital by air ambulance and suffered a broken leg and some minor injuries. All the safety equipment did what it had to do, but still, looking at the speed, it could have been a lot worse. 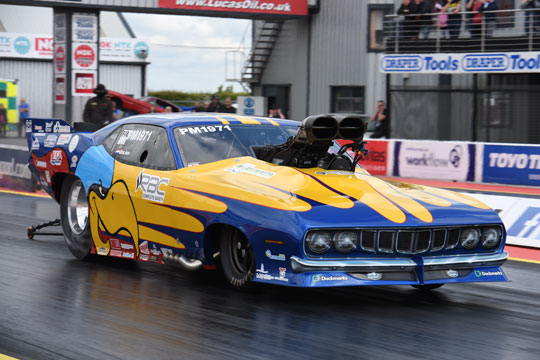 Two major upsets in the first round, as number five qualifier Robinson suffered severe tyreshake and had to give up his run, handing the win to Harteveld, the Dutchman’s first ever Pro Mod round win. Rookie Tooren had some handling problems with the Cuda and was defeated by Kev Slyfield. 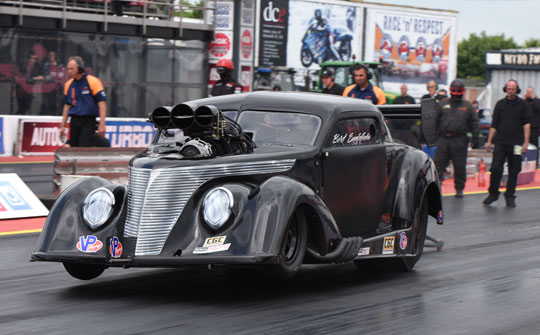 Vegter still had his ignition issues and was eliminated by Philip Englefield, who reset his personal best to 6.29 seconds. Bader, Eriksson, Gullqvist, Stiefel and Lindberg also advanced to the next round. 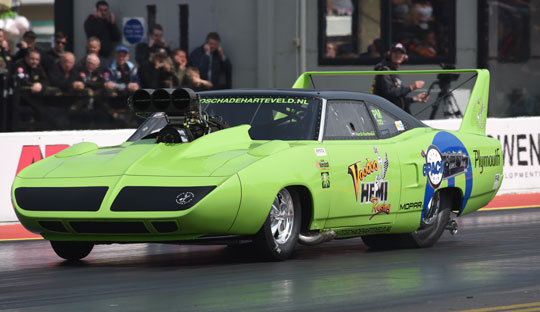 Harteveld reset his personal best to 6.40 seconds, but that was by far not enough to beat Eriksson’s 6.01 seconds. Bader also came close to the 6-second barrier to defeat Englefield, while Gullqvist had a bye run when Stiefel suffered some problems from his first round race. Lindberg impressed with 5.99 seconds, to defeat Slyfield, the last remaining home crowd favourite. An interesting outcome of the quarter finals was that the top four qualifiers all advanced to the semi-finals. 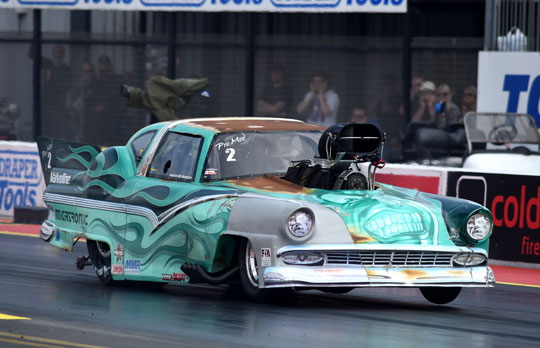 Number one qualifier Bader had to face number four qualifier Eriksson. The Swede knew he had to do something special to beat Bader, but Eriksson pulled a red light and was out. 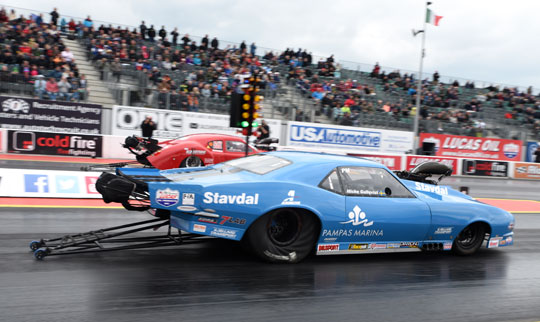 In the other semi-final, it was Gullqvist’s turn to run 5.99 seconds to defeat a far from trouble free Lindberg (9.01 seconds). 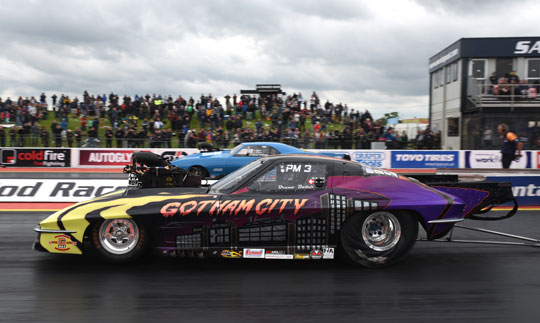 With Bader and Gullqvist, The Main Event got the final it could only have dreamed of, as the number one and two qualifier had to face each other in the last run of the day. And nobody was disappointed, as it was the closest final of the day with both drivers in the 5.9-second zone. Bader was away first and reset his personal best to a stunning 5.939 seconds at 235 mph, and although Gullqvist was faster with 245 mph, his 5.96 seconds was not enough to beat Bader. 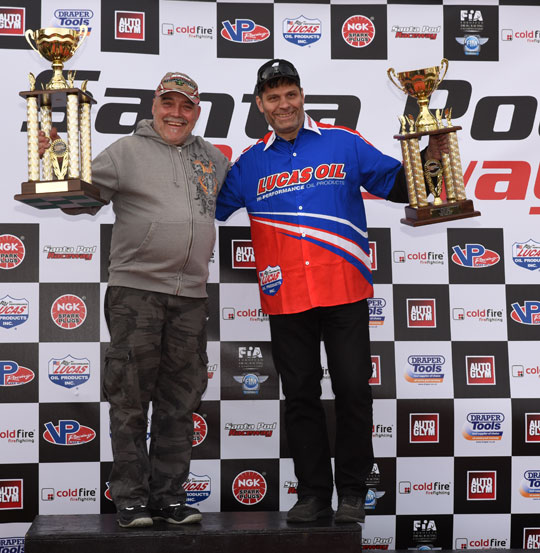 Bader is the well-deserved leader in the championship after The Main Event. If the Swiss driver can keep the right combination of speed and consistency he showed in England, he might be the man to beat for title favourites like Gullqvist, Eriksson and Lindberg. 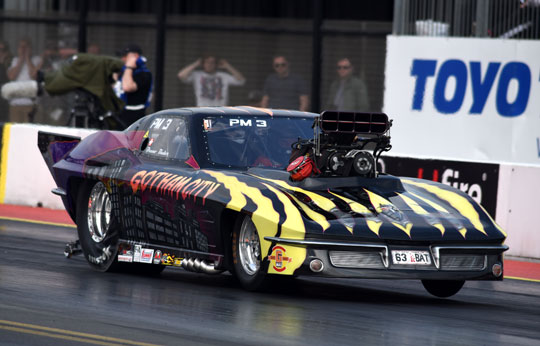