Stig Neergaard in command at The Main Event 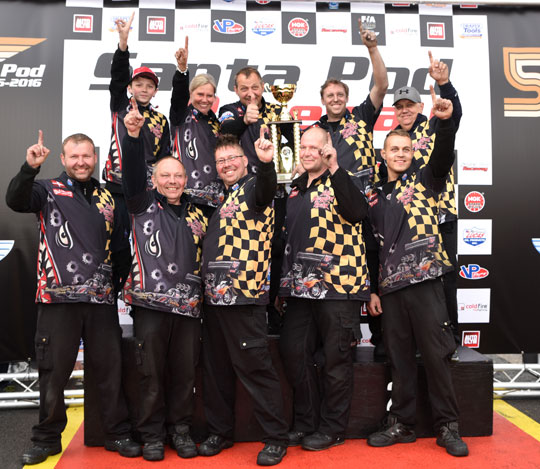 Stig Neergaard and his winning team

Stig Neergaard has always had the speed, but at this year’s Main Event ‘the real Stig’ surprised with the combination of both speed and consistency at the moment he needed it. The Dane was low qualifier with 4.02 seconds and was the only Top Fuel driver to break the 4-second barrier at the season-opening race of the FIA European Championship at Santa Pod Raceway. So Neergaard deserved the win when he defeated reigning champion Micke Kågered in the final, to be the first leader in the 2016 FIA European Top Fuel Championship. 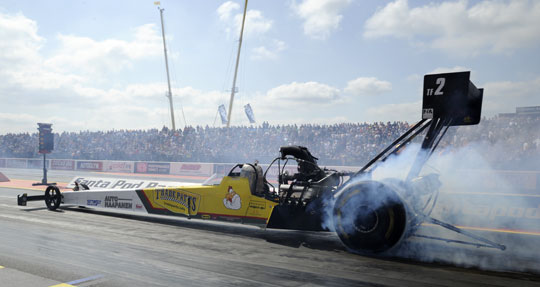 Anita Mäkelä (4.07 seconds) was the leader after the first session on Saturday. But in the second qualifying it was Stig Neergaard who stormed to 4.02 seconds at 267 mph to take over the lead. Because the weather conditions were less perfect on Sunday, nobody could improve on this performances, so the Dane stayed in the number one position with last year’s runner-up Mäkelä in second. 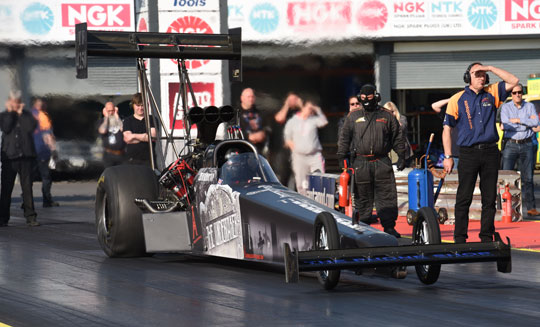 Top Fuel rookie Steve Ashdown, who made his final licence run in the week before The Main Event, surprised with a number three qualifying position after day one. His Rune Fjeld Motorsport teammate Liam Jones shortly took over the number three spot, but Ashdown bounced back with a stunning 4.16 seconds to regain the number three position. 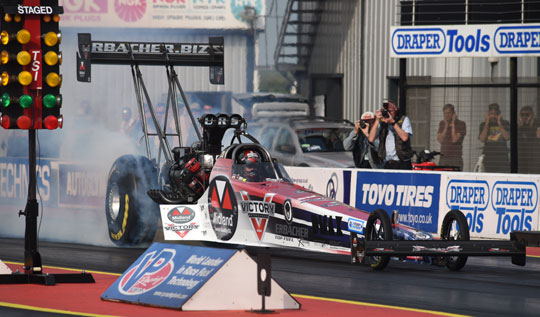 Urs Erbacher had some problems with the set-up of his new fuel system and (like some other drivers) felt the lack of test runs so early in the season, and had to abort some runs. The multiple champion was fifth with a disappointing 4.77 seconds. 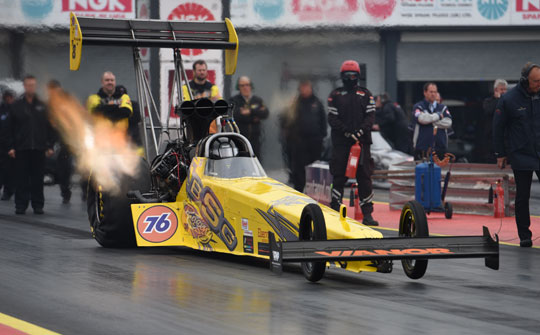 Stefan Gunnarsson and Micke Kågered had similar problems with their new equipment, and were sixth and seventh. Not the start of the season that the reigning FIA European champion had dreamed of. 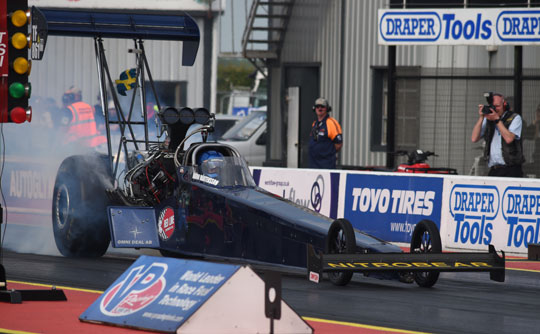 In his first visit to Santa Pod, Björn Mårtensson completed two runs in qualifying, and with 6.13 seconds the Swede was number eight and last qualifier. 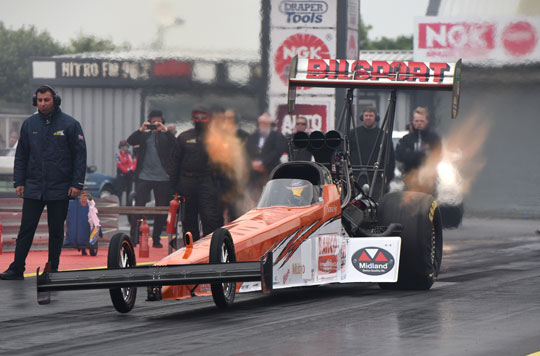 Thanks to their number two and seven qualifying position, last year’s runner-up Mäkelä and reigning champion Kågered had to face each other in the first round. The Finnish fan favourite didn’t get her revenge as the Bahco driver improved at the right moment to 4.13 seconds, by far his best run of the weekend, while the Dom Lagana tuned yellow and white dragster had serious traction problems. 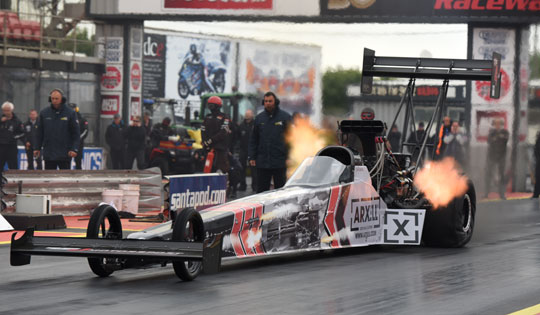 Ashdown showed the consistency of the RFM fueler and took his first ever Top Fuel round win over Gunnarsson. The run between Jones and Erbacher was a traditional pedal fest with the local hero taking the win light. Neergaard had a bye run when Mårtensson’s crew had problems to fire up the engine of the car. 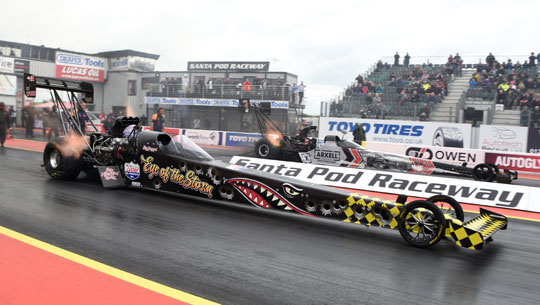 In the semi-finals Neergaard had to face Jones, who wants to go for the title in his second Top Fuel season. In the best run of eliminations Neergaard stormed to 3.972 seconds, the first and only 3-second run of this year’s Main Event. Jones’ 4.11 seconds was the second best elapsed time of eliminations, but not enough to beat the Danish dynamite. The second semi-final was a big disappointment as Ashdown’s parachutes deployed in the burn out and Kågered idled to the finish line. 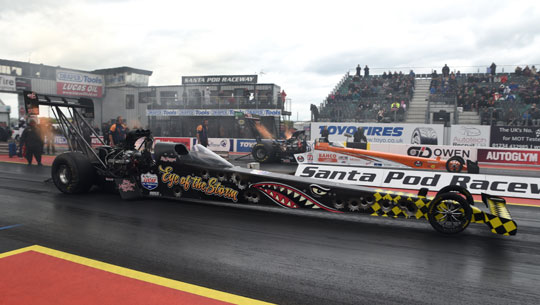 In the final both Neergaard and Kågered ran into serious traction problems and had to pedal their cars. The reigning champion lifted immediately, while Neergaard hit the throttle again with an engine explosion as a result. But the Dane was at the finish line first and took the win in the first race of the season. A well-deserved victory for the Danish team that were fastest all weekend. 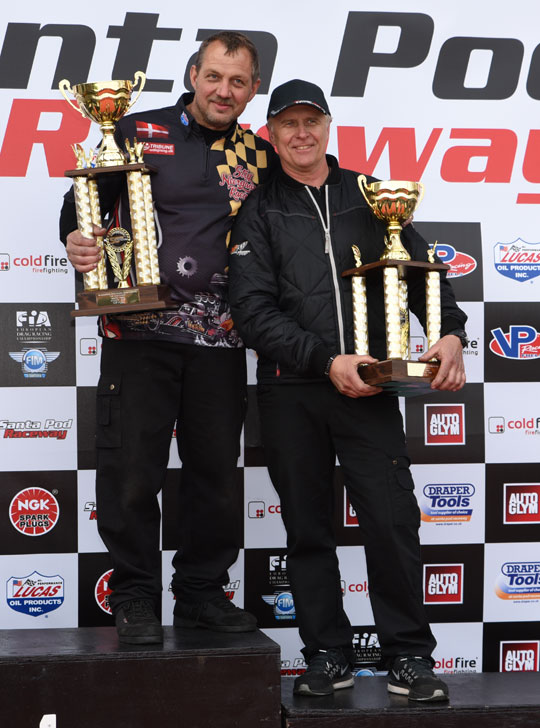 In the championship Neergaard is of course the first number one of the season with 101 points, with Kågered in second position (75) and the RFM teammates Ashdown (62) and Jones (60) third and fourth. 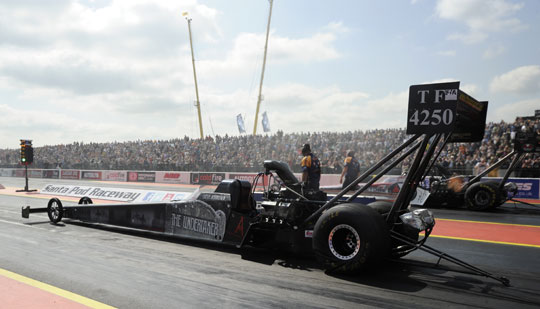