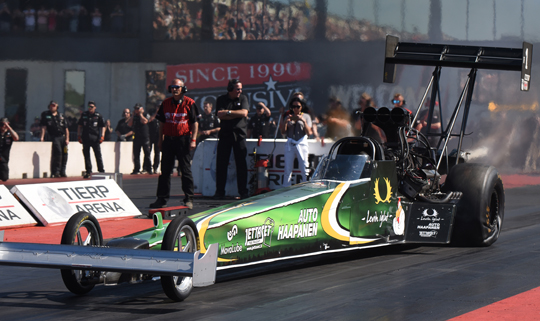 After two excellent races at Santa Pod Raceway and Tierp Arena, it’s already time for race number three of the FIA European Drag Racing Championship, the FHRA Nitro Nationals at the brand new racetrack in Kauhava, Finland. In Top Fuel Anita Mäkelä won the first two races of the season, while Jimmy Ålund took both victories in Pro Stock, and so these two drivers have a reasonable margin to the numbers two in their respective categories. Jonny Lagg and Jan Ericsson travel to Finland as the leaders in Top Methanol and Pro Modified, but in these two categories the pursuers are not far behind.

The FIA European Drag Racing Championship will have its third stop of the season at Kauhava, the brand new dragstrip that opened its gates last autumn. The Kauhava dragstrip is part of the LSK Business Park in Kauhava, located 400 kilometers (250 miles) northwest of Helsinki and 80 kilometers east of Vaasa. Kauhava replaces Alastaro Circuit, for many years the home of the FHRA Nitro Nationals, the Finnish round of the FIA European Drag Racing Championship.

Kauhava gives the Finnish Hot Rod Association the opportunity to invest in a new facility and must bring drag racing in Finland to the next level. Qualifying for the FHRA Nitro Nationals will start on Friday 5th July, and will continue on Saturday 6th July. Eliminations will start on the morning of Sunday 7th July. 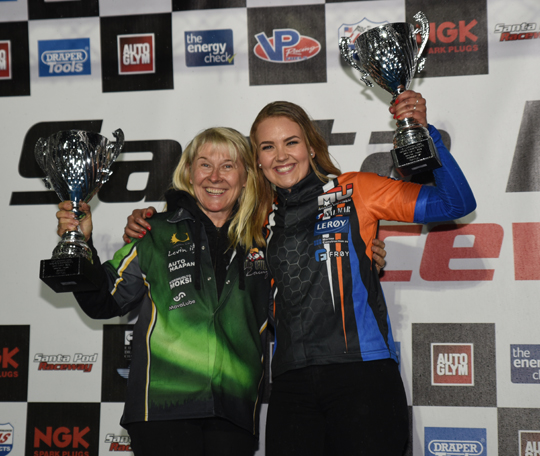 Anita Mäkelä is the clear leader after the first two rounds of the Top Fuel championship. The reigning champion was the winner at Santa Pod Raceway and Tierp Arena and including her two victories at the end of the 2018 season, Mäkelä is undefeated since late August last year! The Finnish home favourite has never been lucky at her home race in Alastaro, but with the change in location that unlucky streak might end as well. 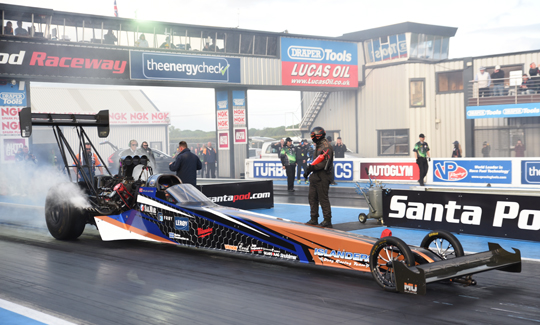 After her sensational runner-up finish at Santa Pod and a semifinal finish at Tierp Arena, Maja Udtian is the number two in the championship. The 21-year-old Rune Fjeld Motorsport driver is in her first full FIA European Top Fuel season and impressed in Sweden with coming close to the 3.842-second European Top Fuel record. Udtian, from Frøya, one of many islands west of Norway, will have FRØY, a company with well boats and service within the aquaculture industry, as her main sponsor in Finland. 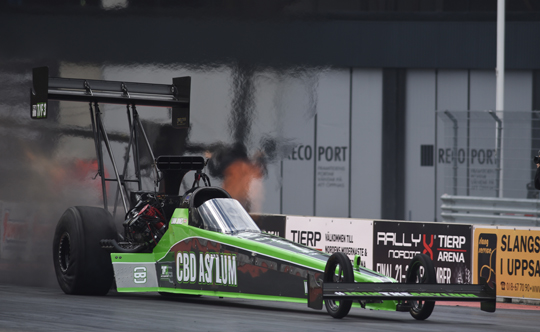 Liam Jones is the number four in the championship and the second RF Motorsport driver in the standings. The CBD Asylum supported driver from the UK was one of the quickest drivers so far this season. Jones claimed the number one qualifying position at Tierp, but he was not so lucky in eliminations. If Kauhava is the turning point for Jones, he will still be a force to be reckoned with in the championship race. 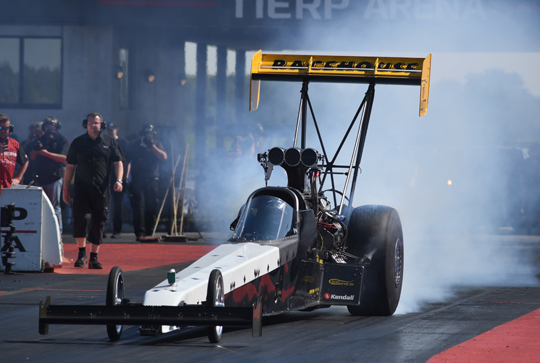 Stig Neergaard is the number six in the championship and the Danish driver is definitely looking for more. Neergaard can be extremely quick, but consistency is still a problem for the Lucas Oil supported driver. Timo Lehtimäki was the surprise winner of last year’s final Alastaro race, but the Finnish driver was defeated in the first round at Tierp and will definitely try for a repeat of his 2018 home success. Antti Horto is the third Finnish driver on the entry list. The Eagle Racing Motorsport driver finished the 2018 FIA European Championship in second position, but has a limited programme this season with Kauhava as his first race of the 2019 season. 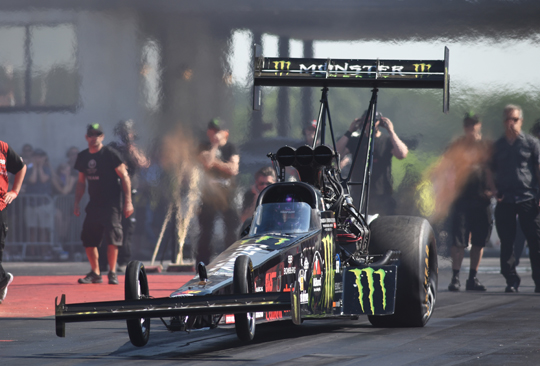 Jndia Erbacher is the third female driver on the Kauhava entry list. The 25-year old driver from Switzerland is in seventh position in the championship. She will be accompanied in Finland by her father, multiple FIA European champion Urs Erbacher. For Urs Erbacher it’s the first race of the season and he will field the car that was driven by Tethys in the two opening rounds of the championship, with a semifinal finish at Tierp as the best result. “Since I was 14-years old dad told me every year he will retire, but he will never do completely. He wanted to make some runs before we go to the next round, our home race in Hockenheim. And we had some mechanical issues so far this season. We want to solve these problems as well before Hockenheim, where we have so many Swiss fans in the grandstands,” said Jndia about the late entry of the team. That brings the number of Top Fuel entrants at Kauhava up to eight. Micke Kågered, the number three in the championship, is not on the entry list so far. Depending on the runs and the results at Tierp, the Swede would decide if he would go to Kauhava or skip the Finnish race. Kågered finished his home race in the runner-up position, but it looks like he will not defend his position in the championship in Finland. 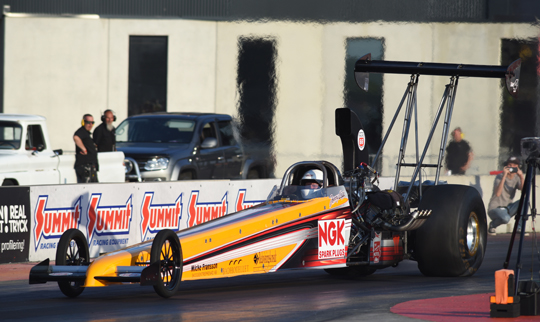 Three against two in Top Methanol

With three Funny Cars and two dragsters on the entry list for Kauhava, for the first time this season there will be more Funny Cars then dragsters in the Top Methanol category. Sandro Bellio was the winner in England with his family run Monte Carlo, while Jonny Lagg was victorious in his dragster at Tierp, and so the Belgian and Swedish driver are separated by only two points in the championship. 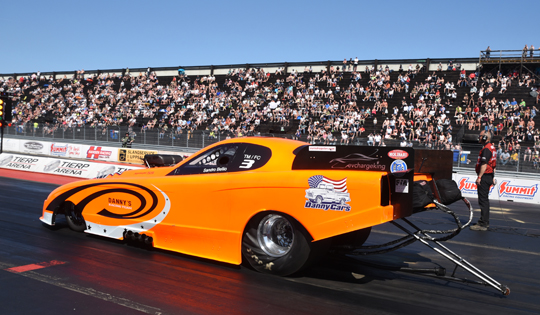 Daniel Jedborn impressed in his first ever Top Methanol race at Tierp and the dragster driver can surprise again. Johnny Oksa and Ari Pietilä will have their first race of the season and both Finnish drivers will try to give the home crowd something to cheer for. 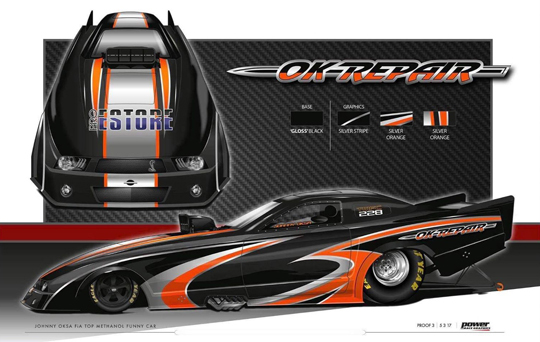 Former champion Oksa is back with a new car after his top end crash at Tierp in June 2018. Pietilä had mechanical problems last year and took some time to regroup, but is now back to fight for championship points. 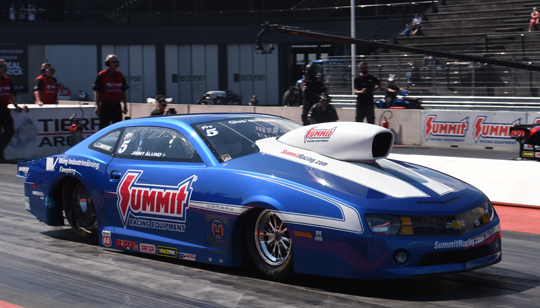 Who can beat Jimmy Ålund?

After ten FIA European Pro Stock titles Jimmy Ålund decided to take a break from ‘full time’ Pro Stock racing and concentrated on the Pro Modified category. This season the Swede is back for all six races and his fellow Pro Stock competitors immediately realized they had a serious problem to deal with. Ålund won in England and Sweden and is leading the title race with a 49-point advantage over Michael Malmgren. 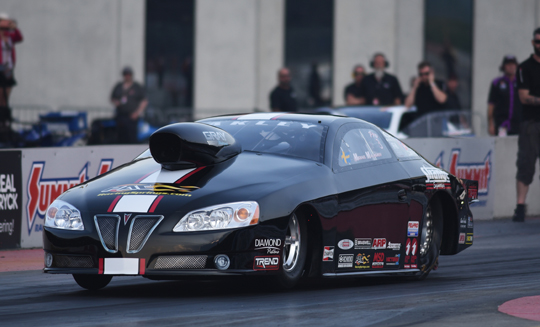 The number two in the championship surprised with his speed so far this season as Malmgren claimed the number one qualifying position at Santa Pod and Tierp Arena, to finish both races as the runner-up. A race win is the only thing missing so far this season for Malmgren. 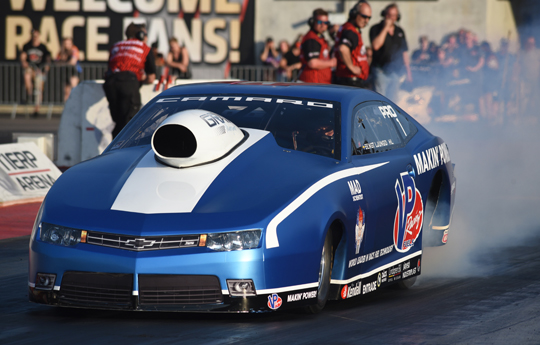 Bengt Ljungdahl is the number three in the championship after the reigning champion had an early exit in Tierp. The VP Racing Fuels supported driver will be out for revenge to keep his championship dream alive. Robin Norén and Stefan Ernryd are the numbers four and five in the championship and separated by only one point. Norén is consistent but looking for a bit more speed to advance to his first final of the season, while Ernryd suffered some mechanical problems that kept the Dodge man away from the podium. Simon Gustafsson started the season with a brand new built Dodge Dart RT and needed the first two races to sort out the set-up of his new car. Former champion Thomas Lindström started his season in Tierp and will have his second race of the season in Kauvaha. With these seven drivers the top seven in the championship will be present at Kauhava. Last but not least there is the welcome return of Richard Sundblom with his Chevrolet Cobalt. 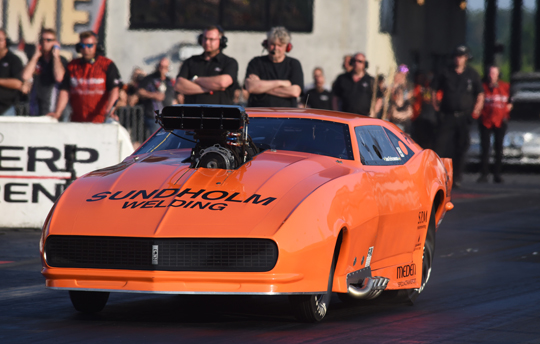 A close fight in Pro Modified

After two races one thing is for sure – the competition in Pro Modified is tough and ruthless. With twelve entrants the Pro Modified category doesn’t have the numbers we see at other races, but with ten drivers from the top twelve in the championship present, it will once again be close in qualifying and eliminations. Jan Ericsson, last year’s number three in the championship, proved his speed and consistency with a semifinal finish in England and a win at Tierp. 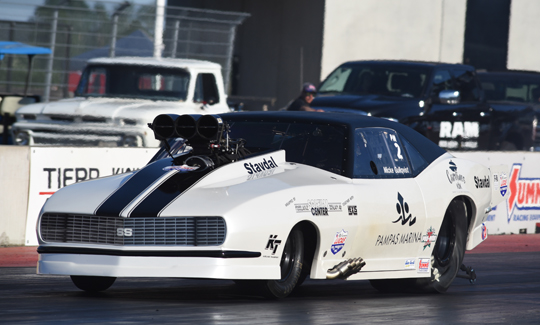 Ericsson leads the championship with a 31-point advantage over multiple champion Michael Gullqvist. The Swede claimed the win at Santa Pod, but was defeated in the quarter finals at his home track and will be out for revenge in Finland. 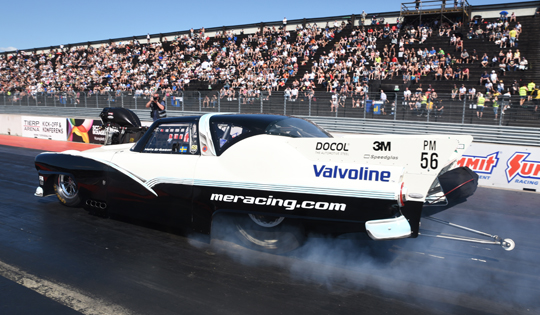 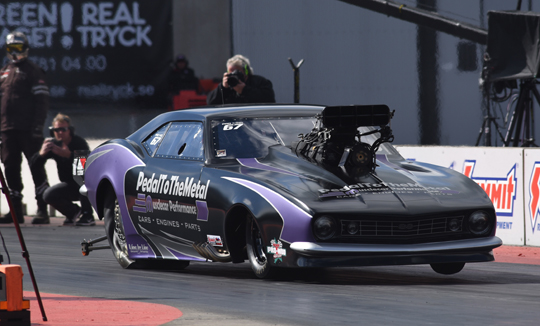 The Dutch PTTM Drag Racing driver stunned with a 5.80 seconds number one qualifying position at The Main Event and a great runner-up finish at Tierp. 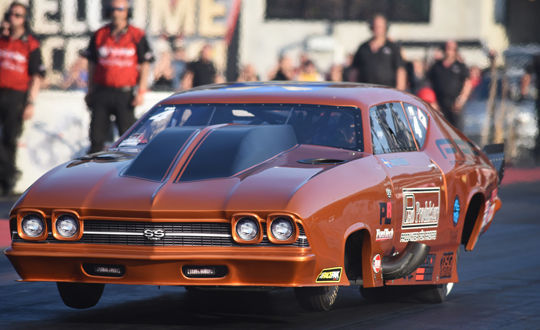 Andreas Arthursson is the number five in the championship, the winner of last year’s Tierp races and the European record holder. The Swede will try to improve on his semifinal finish at the last Tierp race. Jimmy Ålund is the reigning champion, but the Summit Racing driver has suffered from mechanical issues so far this season. To keep himself in the title race at the halfway point of the season, Ålund will definitely need a win and he will try to repeat his unique Pro Stock and Pro Modified double victory he achieved at the 2018 FHRA Nitro Nationals. 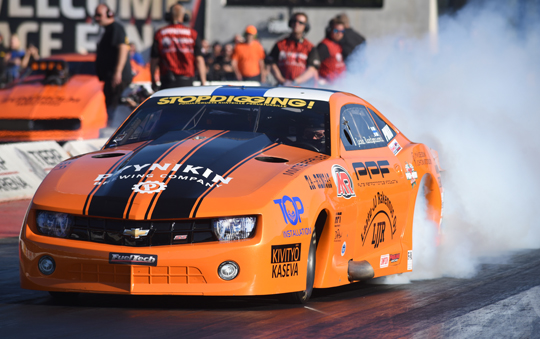 Michel Tooren, Kim Kristiansen, Dmitry Samorukov and Peter Kunc are the numbers nine to twelve in the championship and although not the favourites for a race win, they can surprise and destroy some championship dreams. Jere Rantaniemi is the only Pro Mod driver from Finland in Kauhava. Rantaniemi surprised in his Pro Mod debut at Tierp with a great eighth qualifying position and his first 5-second run with the turbo-Camaro. Last but not least there is Lars Järpler. The Swede will have his second outing of the 2019 season so far.

After Kauhava the FIA European Drag Racing Championship is at the halfway point of the season. In August the title race continues with the NitrOlympX at Hockenheim and the Summit Racing Equipment Internationals at Tierp Arena, to finish the season with the traditional grand finale, the European Finals at Santa Pod Raceway in England.