From the grandstand into the Pro Modified hot seat 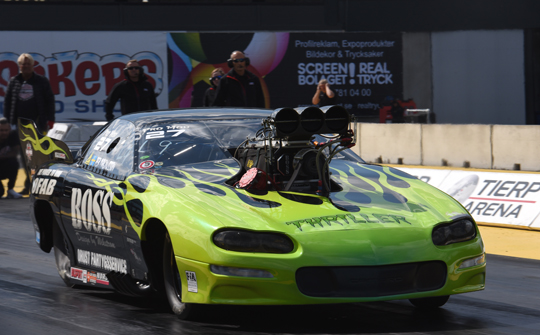 Most people will see it as a reckless bet on a Saturday evening after too much beer, but a few see it as a serious challenge. Per Magnusson is one of those ‘happy few’. Being a drag race fan for many years, but not involved in any team at all, Magnusson bought the brutal ex Patrick Wikstrom blown Camaro to exchange the comfortable grandstand seat for the hot seat of a hot rod from hell.

“I have been a spectator for thirty years and the last five years I accompanied Frank Johansen, former team member of the Lindahl Brothers Pro Modified team and now technical inspector. In the years with Frank I learned more about the sport,” said Per Magnusson, who lives in Gothenburg and runs three companies. “I have a car workshop and a survey company for the cruise industry. The third company is under construction and will work with laser blasting.” 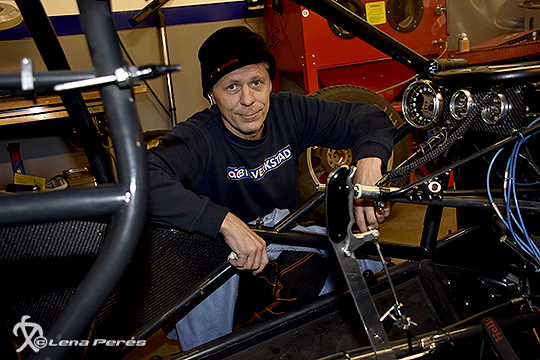 “The idea to go racing in Pro Mod started when I wanted to join one of the Pro Mod teams. But they didn’t want a car mechanic, because they cheated so much. Then I told them that I would buy my own Pro Mod and start a team where all crew members would be car mechanics. I could see them laugh, but I hope that 2019 will be a good season and that we can show them that it was a mistake not to let me in their team,” said Magnusson about the start of his drag racing career. 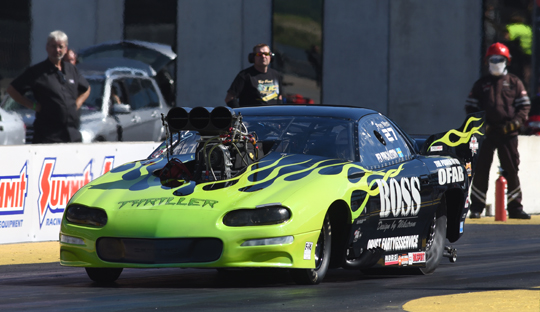 A major step was taken when Magnusson bought the championship winning Tim McAmis Race Cars built Chevrolet Camaro from Patrick Wikstrom, and the multiple Pro Mod champion also offered his help to tune the car. The 2018 season revolved around completing the licencing procedure. “We tried a couple of times at Gardermoen and Tierp Arena, but we had some problems with the gearbox and the converter. The first time in the car I was nervous, but not because it was fast, but because I was worried that I would destroy the car with my mistakes. When all problems with the car were solved, we went back to Gardermoen and managed to complete the licencing procedure. My best ET was 6.36 seconds at 347 km/h and in that run I lifted after 5 seconds.” 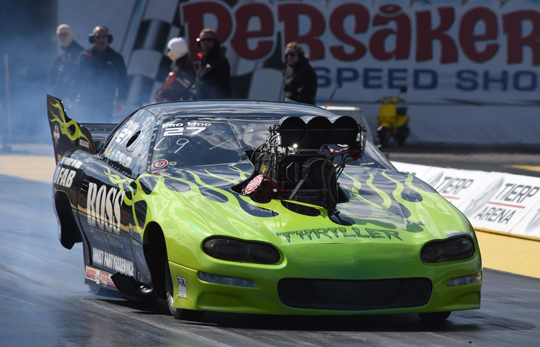 Magnusson has interesting plans for next year. “I´ll try to drive all six rounds of the FIA European Pro Modified Championship, but that will all depend on the sponsorship I can get. The goal is to run low 6-second runs or maybe a high 5-second, and a top ten position in the championship.” To achieve that, the team made some major changes to the Camaro. “When we bought the car we removed the clutch and gearbox and installed a converter with Lenco drive. We also installed a new fire extinguisher system, chair, seatbelts, auto shutoff kit and a new ignition system. We also checked and updated the engine, blower and rear axle. This winter we will rebuild the Lenco drive.” 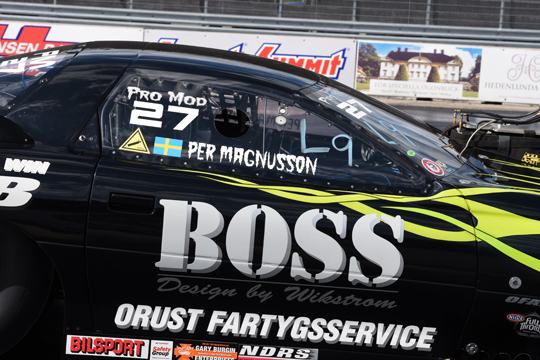 Magnusson got help from Wikstrom (crew chief), tuner Simon Sunnfors and Fredrik Östlund and he hopes to have them with him again in 2019. “Maybe we need one more in the crew.” The Pro Mod rookie is very thankful for the support from the sponsors: AGA gas, OFAB, SS Bärgaren, Vargöns Mekaniska, Mat o Potatis, VIP Hälsan AB, Asfalttjänst Hisingen AB, AD bildelar, Prevex, Almax System and KK Service.

Magnusson concluded with a big thank you and a joke, or do we have to see it as a warning? “I would like to thank all those who helped me this year, and for next season, maybe I should install a rear-view mirror ha ha.”