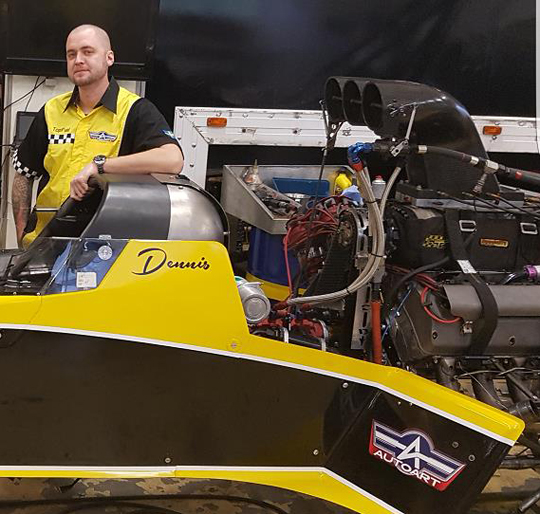 Dennis Nilsson didn’t make headlines with his final licencing run. No wonder, as the Swede had to do it on a cloudy and rainy Sunday, one week after the European Finals and without the die-hard drag race fans in the Santa Pod grandstands. But one attempt was enough and with 4.32 seconds at 272.11 mph Nilsson had his Top Fuel licence in his pocket. As the car is waiting in the workshop, the planning for a 2018 FIA European Top Fuel Championship campaign can really take off.

Dennis Nilsson only had to do one run to earn his Top Fuel licence, but still it was a close call that weekend at Santa Pod Raceway. “For sure it was”, said the 29-year old Nilsson, who lives in Helsingborg, Sweden. “I needed one good run. We made up a plan with Rune Fjeld to drive one of his Top Fuel dragster the week after the European Finals at Santa Pod. We got there on Friday, and it rained. We sat in the pits all Saturday with heavy rain, and so no driving was possible. Sunday morning it rained again, and we had to catch our plane at 3 PM. But the sky was clearing up and as it looked like we could run at 1 or 2 PM, we rescheduled our flight to Monday lunchtime. I was  the first car out that Sunday with thousands of Fords waiting, as it was the FordFest event that Sunday. The car hooked up to the track and I made a 4.32-second pass at 272.11 mph! The licence was there! What a great day and well worth waiting!”, said Nilsson about this exciting weekend.

That Nilsson only needed one licencing run, had to do with the time he spent at tracks in South Africa. “I started to drive Junior Dragster as a kid in the late 90s for a couple of seasons. After that, I had a long break until 2012, when we bought a fuel Funny Car that we sent down to South Africa to do a burnout show at an event at Killarney racetrack in Cape Town. After that event we took the car to Johannesburg, where I got a national licence and did some show runs at Tarlton Raceway. One year later we shipped the car back to Sweden and bought a Top Fuel car that we, me and my dad Johnny Nilsson, sent to Tarlton. In April 2016 I started on my Top Fuel licence. After some pretty good runs we broke some parts, and as that was not fixable on site, we had to stop right there and went back home to Sweden. There was only one good run missing to complete my licencing procedure, and that was the one I described, at Santa Pod in the car Antti Horto drove this season.” 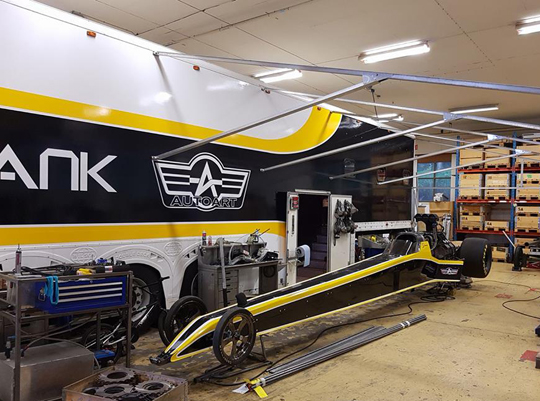 Nilsson’s plans for the 2018 season are not 100% sure at the moment. “We have a car, ready to go, in our shop at Valhall Park in Ängelholm. It’s a former Andersen Racing car that we bought in 2014. We have so many different plans in our heads, it’s difficult to say how this will all work out. The racing schedule also depends on what sponsors want. We are working with and talking to a couple of sponsors at the moment, but of course we are also eager to make a good offer to new ones.”

The team also have a trailer in the workshop. “We bought that one from a Danish racer. It’s a really nice trailer and we are working a lot with it to make it fit our operation perfectly. The name AutoArt on the car and trailer refers to my dad’s company. Last but not least we already have a couple of guys for the crew, and they all know nitro racing very well. They will join us when we go racing and we have been in contact with some really experienced nitro guys as well, and they are also interested to help us. At the moment we are a few short, but we still have some months to go.”

Let’s hope Nilsson’s plans come together and the rookie Top Fuel driver can do the full FIA European Championship tour next year.

For more information about Dennis Nilsson and his team, go to and like his Facebook page: Dennis Nilsson Top Fuel Racing, or contact him on E-mail dennisnilssontf@hotmail.com