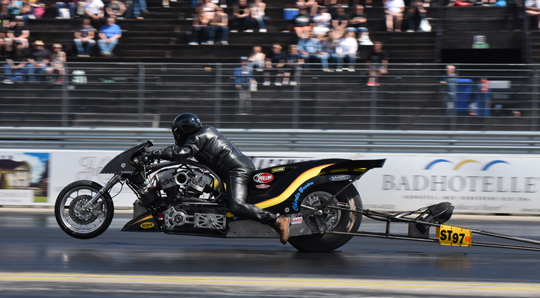 Anders Hörnström raced to victory in Super Twin Motorcycle at the season-opening Tierp Internationals at Tierp Arena. In the final the Swede defeated Greger Johansson. In Pro Stock Motorcycle Thomas Lysebraate Olsen surprised in the final by defeating number two qualifier Robert Karlsson. There was an even bigger surprise in Top Fuel Motorcycle where Peter Andersson defeated Sverre Dahl in the final. Mogens Lund from Denmark was both quick and consistent and was the winner in Super Street Bike at the first round of the EDRS Pro Nordic Motorcycle Championship.

Beautiful weather conditions at Tierp Arena at race day. In Super Twin Motorcycle Anders Hörnström, the number six qualifier, improved on his qualifying performance and defeated the number three and two qualifiers, Petri Mattsson and Roman Sixta, to advance to the final. 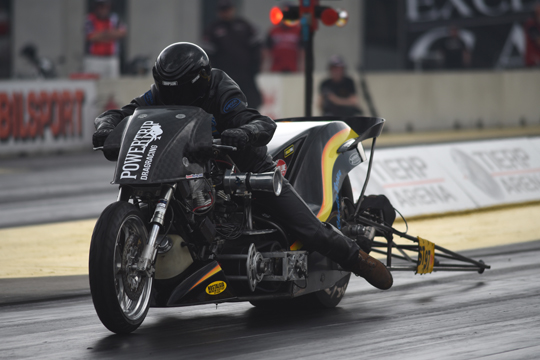 Hörnström, racing a new motorcycle this season, impressed even more with his new personal best elapsed times (6.7 and 6.8 seconds). 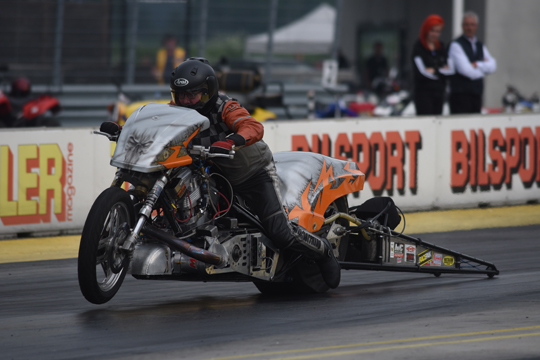 In the final Hörnström had to face Gregor Johansson, who reached the final after defeating number one qualifier Tommy Grimes in the semi-final. In the final it was once again Hörnström who improved to 6.66 seconds to take the win. 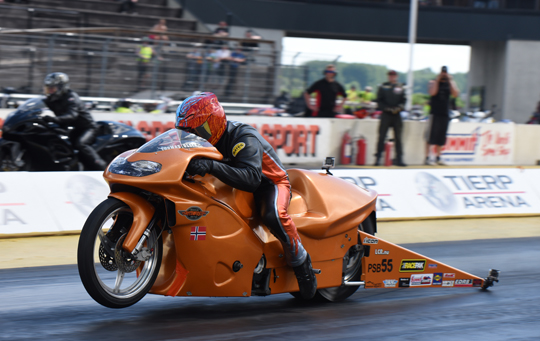 In Pro Stock Motorcycle Thomas Lysebraate Olsen from Norway surprised Timo Savolainen in the first round, to advance to the final with a bye run in the semi-final. 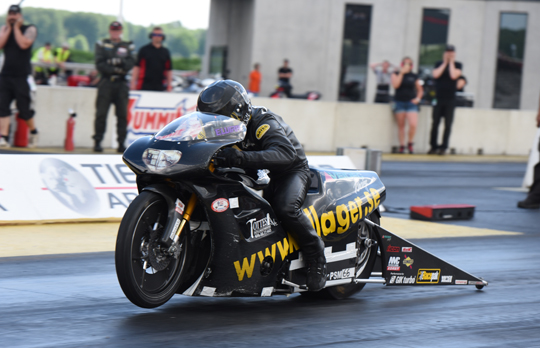 In the final Olsen had to face Robert Karlsson, the number two qualifier and favourite after his consistent 7.0 seconds elapsed times in qualifying. But in the final Karlsson slowed down to 7.35 seconds while Olsen stepped up to 7.26 seconds to take the win, the first win for the Norwegian rider in an EDRS Pro Nordic MC Pro Stock Motorcycle race. 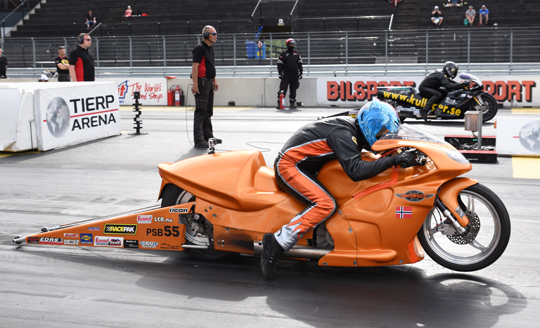 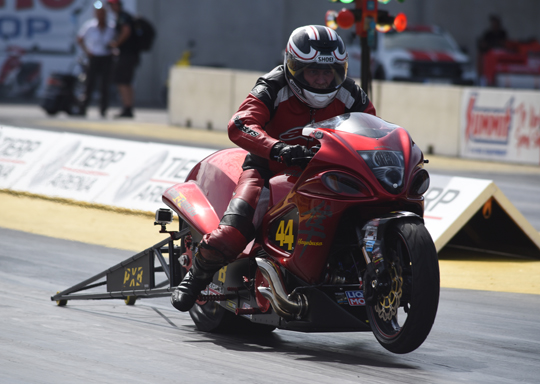 In Top Fuel Motorcycle Peter Andersson advanced to the final, where he had to face number two qualifier Sverre Dahl. In the final Dahl ran into problems, crossed the centre line and was disqualified, handing the win to Andersson. 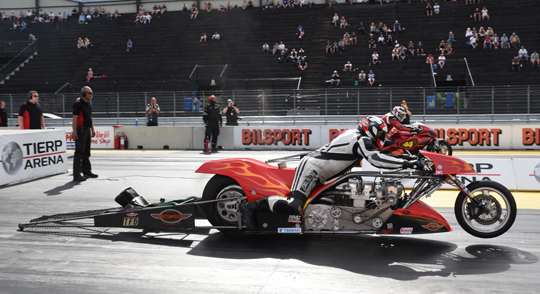 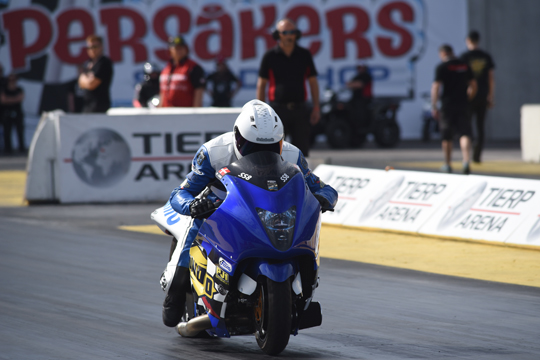 Eliminations in Super Street Bike were exciting, but in the end the top four qualifiers all advanced to the semi-finals. Mogens Lund, the number one qualifiers who recorded stunning 7.0 seconds elapsed times, defeated Vesa Ruhanen in the semi-final to advance to the final. 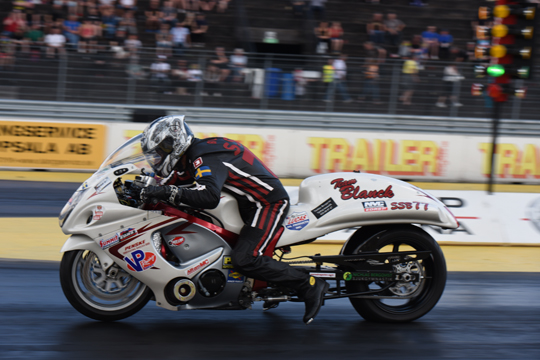 In an extremely close semi-final Anders Blanck defeated number two qualifier Robert Nilsson with a better reaction time. In the final Lund proved his great form of this weekend and took the win and so the Tierp Internationals got the winner who deserved it the most. 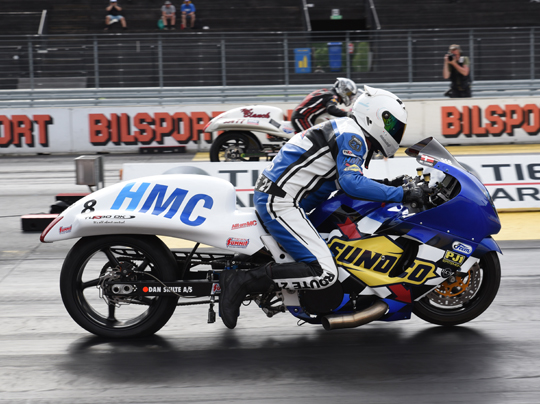 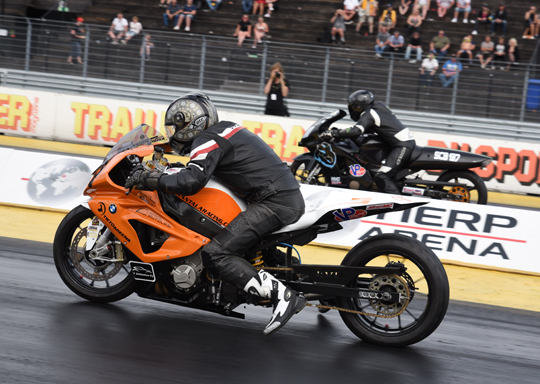 In Super Comp Bike Kimmo Rantala defeated number one qualifier Nichlas Sverin in the semi-final and had to face the number two qualifier Emil Östlund in the final. Once again Rantala surprised a favourite and took the win in this 8.5-second index category. In Super Gas Bike Iiro Reinola and Magnus Pollack had to face each other three times and all three wins went to Pollack. 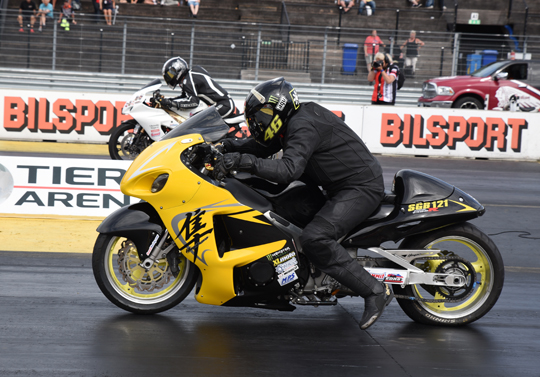