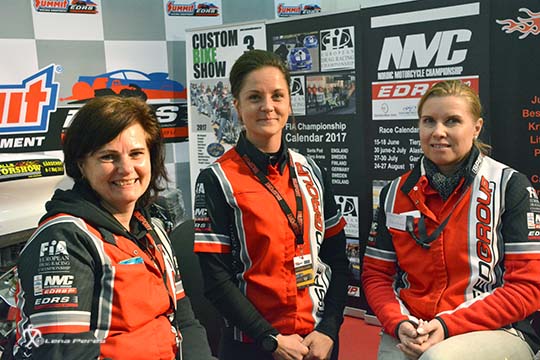 Elmia – Bilsport Performance & Custom Motor Show is over for this year and a lot of Easter eggs have been opened. More than 74 000 people visited the show over the four days it lasted. And in the Speedgroup stand they could have a seat in the 2-seat dragster as well as on the Beast, Jr Dragster and Junior Drag Bike.

Per Bengtsson who owns the Beast Drag bike, the current European speed record holder in Super Twin Motorcycle, worked in the Speedgroup stand during the weekend, and the Beast attracted a lot of interest from visitors. The plan for the bike and team is that Tommy Grimes from the US, continues to be the driver during the whole EDRS Pro Series 2017 with Per as the team manager. 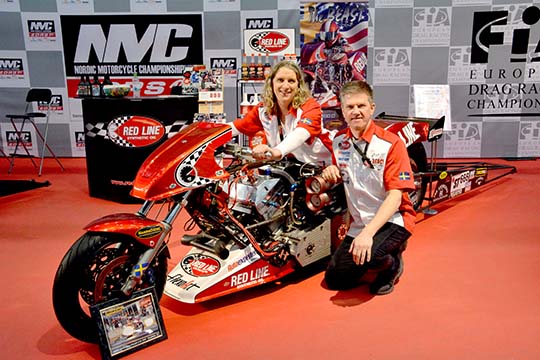 –          When we asked if Tommy would like to participate in the team and do the whole series, he just said he´s been waiting for us to call says L-O Jonsson, one of the long-lasting team members with a smile. And in October we´ll ship the Bike over to participate in the Manufacturers World Cup Finals at Valdosta, US in November. It’s been a positive experience so far and the chemistry between us is just the best. 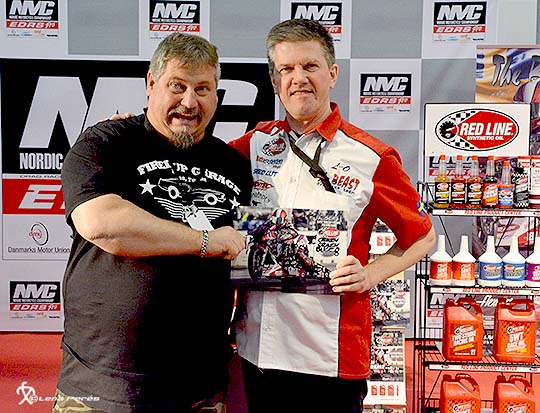 Tom Smith from Misfit Garage together with L-O Jonsson.

At the show the well-known Tom Smith from Misfit Garage TV-series made a visit in the Speedgroup stand. He was very impressed with the Beast and promised to promote the bike and the Swedes on a car show close to the South Georgia Motorsports Park in November.

–          It´s going to be a strong focus from the US on European drag racing this season, tells L-O. As Tommy Grimes is coming over here to do the whole series, the first time for a US citizen. And then we’re going over there to make a good show as well. It looks very promising for the upcoming season. 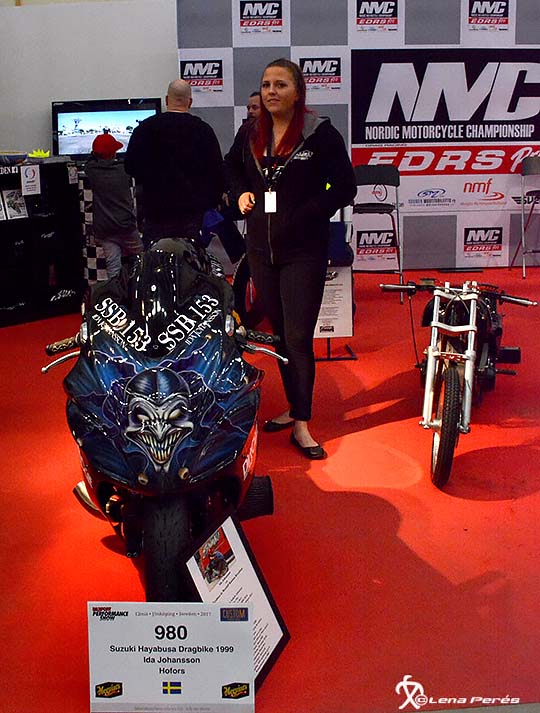 Also in the stand we found Ida and Niclas Johansson from Rawhill Racing who showed Ida´s brand-new Super Street Bike. built by dad Niclas. They also had the coolest Junior Bike on display, which was very popular with a lot of children at the show, who could sit on it and get the feeling of riding a real bike. Not so popular for the parents maybe. 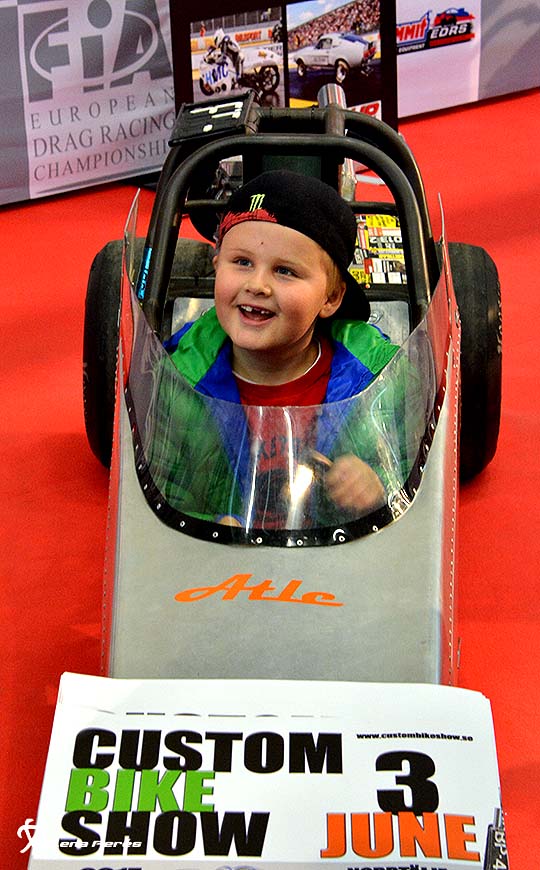 Olle was very happy to try out the junior dragster in the stand.

The children also had the opportunity to sit in Atle Poolsaar´s Junior Dragster. Speedgroup had their 2-seat dragster on display, which is going on tour to a number of race tracks this summer. 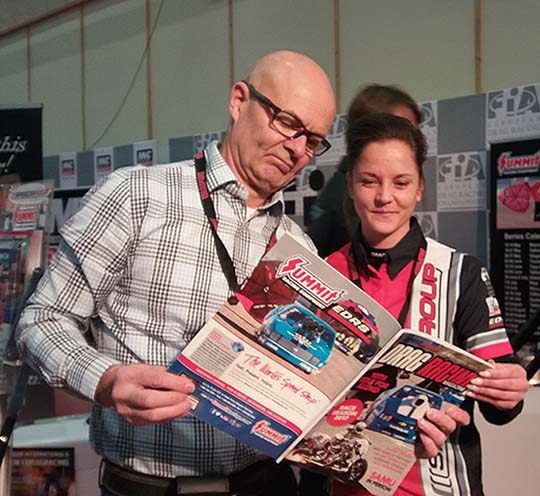 –          Visitors who bought the new Speedgroup Drag Racing Magazine on site at Elmia was offered to be in a draw with chance to win a ride in the 2-seater, Åsa Kinnemar CEO for Speedgroup tells. We launched the magazine this weekend and are happy with the result. It is filled with a mix of useful drag racing information and feature articles. It was also promoted during Easter at the FHRA American Car Show in Helsinki in Top Fuel Dragster driver Janne Ahonens stand. The magazine is now available for on-line ordering and we send worldwide. 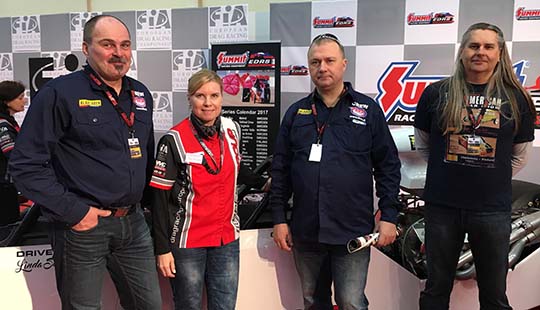 FHRA took the opportunitet to visit the show straight from their own American Car Show in Finland.

There was many well-known visitors in the Speedgroup stand and the interest for drag racing was big. Which looks good for the future. 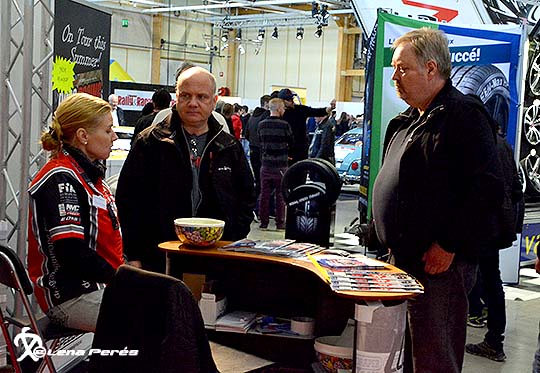 Jörgen Hult and Micke Schriever from Safety Group stoped by as well. 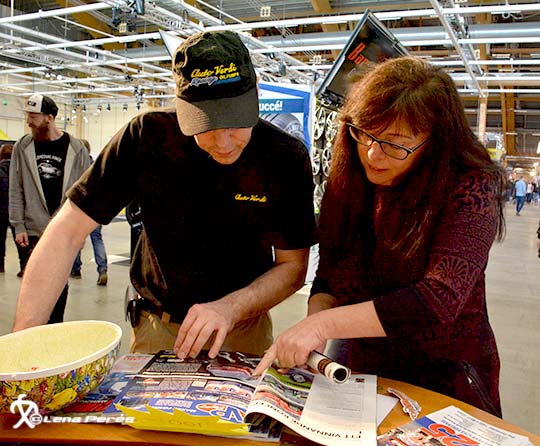 Stefan Verdi from Auto Verdi checking out their add in the magazine together with SBFs secretary Helen Rapp. 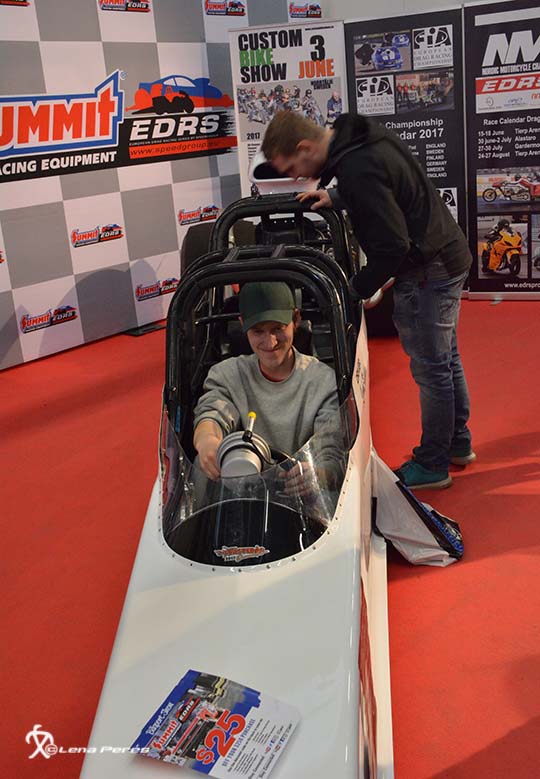 Testing the seat in the 2-seat dragster was very populär at Speedgroup stand. 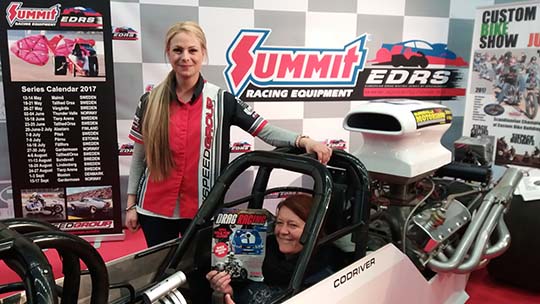 Linda Siivikko is taking this five winners on a lifetime ride this summer.

The winners of the 2 seat dragster rides, which will be organised May 26-27th at Vårgårda Dragway were:

Order your copy of the Speedgroup Drag Racing Magazine here: