The Maltese Lion continues to roar

Duncan Micallef impressed with a 3.91-second run in his first race of the 2016 season and even improved on that performance two weeks later at Santa Pod’s European Finals with 3.896 seconds at 312 mph. Thanks to these achievements, Micallef won the title Sportsman of the Year in Malta a few weeks ago, and the Rune Fjeld Motorsport driver stayed on a high by recording 4.03 seconds at 303 mph last weekend at his home track Hal Far Raceway, resetting both Maltese national records. But the Maltese Lion is still not satisfied, as he now plans a full attack on the FIA European Top Fuel title. 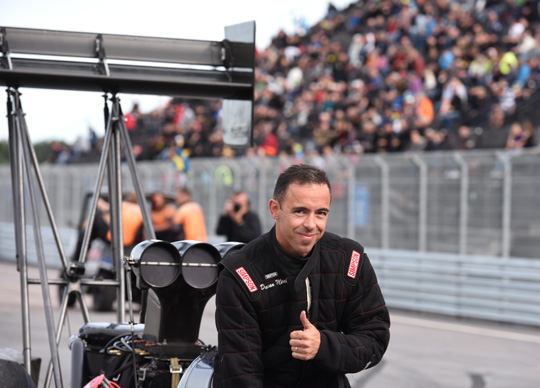 The Maltese love drag racing and as they are always looking for the strongest competition, it was no surprise that Duncan Micallef wanted to race in the FIA European Championship. Micallef completed his Top Fuel licence runs in 2012, but after a number five position in the 2015 FIA European Top Fuel Championship, with a runner-up position at Tierp Arena as the highlight of the season, the Maltese driver had to skip the first part of the 2016 season. 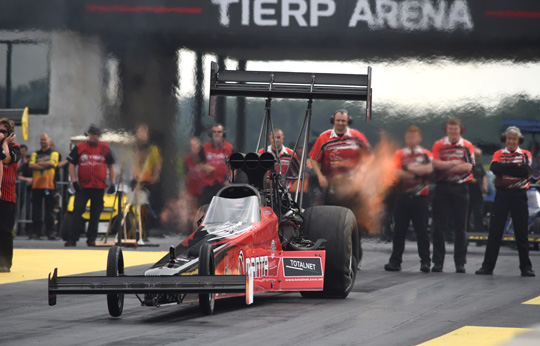 Micallef was back behind the wheel of the Rune Fjeld Motorsport Top Fueler at the 2016 Scandinavian Internationals, and that was the start of a still ongoing route to the top. The Maltese driver surprised with an impressive 3.91 seconds qualifying run and proved it was no fluke with two 3.896 seconds/312 mph runs in the quarter and semi-final of the European Finals at Santa Pod, two weeks later. Micallef finished the race as the runner-up, and his reputation as one of the fastest and quickest European drag racers was established. Thanks to this performance, Micallef was crowned Sportsman of the Year 2016 in Malta a few weeks ago. 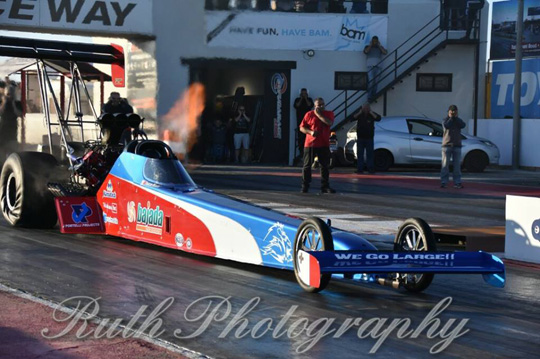 But last weekend Micallef surprised once again. In the ‘older’ blue and red Rune Fjeld Motorsport car, Micallef stunned his home crowd at Hal Far Raceway by storming to 4.03 seconds at 303 mph, a new national Maltese elapsed time and speed record. “It’s the Rune Fjeld car I licenced in, back in 2012. It was the first 300 mph plus, the first 4.0 et run and with 0.86 seconds the best 60-foot time ever, and probably the fastest and quickest run of that car ever. According to Rune, the track at Hal Far Raceway can go down to even 3.9 seconds. He was amazed by the track as he was here five years ago. The corrected altitude was just 100 feet! It is Rune’s car, but the plan is to keep the car in Malta, so we can race it when we have a chance to do so!” said the Maltese record holder. 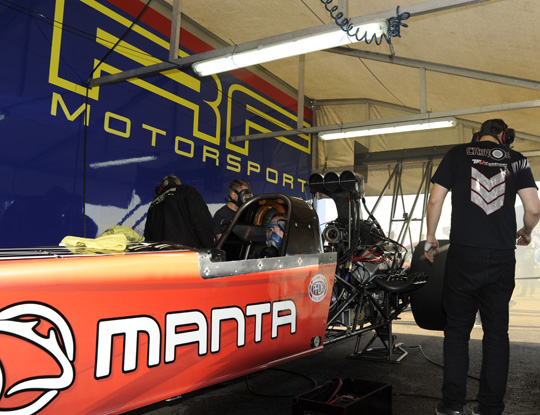 For the coming 2017 season, Micallef’s plans are clear. “With Rune Fjeld Motorsport we will do the full FIA European Top Fuel Championship in the same car as we ran last year. We will also be at the Easter Festival of Power at Santa Pod and we might do some mid-season testing as well. Sponsorship will be almost the same, and probably the car will be called ‘Lion’, but I’m not sure about that yet. To be successful, you need a goal to work to, so I think it’s time to try and go for the FIA European Top Fuel title. But if we don’t win, nothing will change in my strength and attitude, as I will keep on pushing, year after year. We will also be working on consistency this year, as that is also important and a thing I always wanted. I know that all our competitors will do their best to be at their highest level, but I’m sure that our team will do the best they can. For me, the season started on a very nice note in our home land, and we want to keep that level the whole season.”