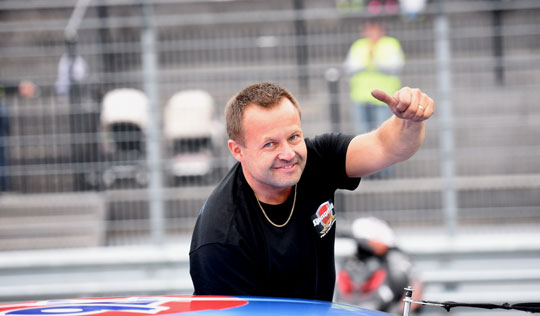 Bengt Ljungdahl is having a season of firsts. Completely different experiences than he had in the 2015 season when he attended races at Tierp only and failed to qualify for either race day, Bengt has taken the 2016 season in his grasp and attended all races, qualifying at everything to date. Could the likeable Swede maintain his record of high qualification positions and go some more rounds at Tierp?

Standing in his way would be Jimmy Ålund, still hungry for his 10th championship and the points leader coming in to this event. 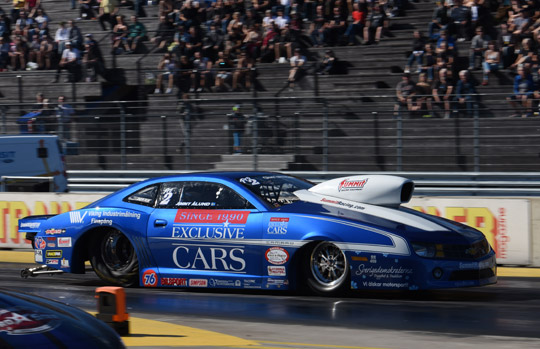 Thomas Lindström was also entered and would be making his last appearance for the 2016 season due to the imminent birth of Thomas and Nina’s first child. Thomas won this race in 2015 and would be eager to defend his title and championship position. 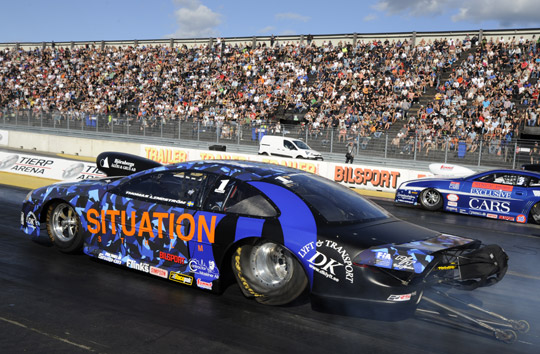 Michael Malmgren has had the opposite of Bengt’s season, a season to forget and chalk up to experience.  Michael failed to qualify at Tierp 1 in June, suffered engine damage in Hockenheim and came to Tierp in (for him) a very lowly 5th place.  Michael would be intent on making up some lost ground. Things have also not been going exactly to plan for Magnus Petersson, although he has managed to qualify at all rounds, the win at Tierp 1 has been the high point of the season for the PB Racing team.  The rain affected Alastaro round meant that no elimination was completed, but first round exits at Santa Pod 1 and Hockenheim have left the team somewhat adrift of the main points race. Still sitting in third position they needed points in Tierp to hold on to the 3 spot and keep it from the clutches of Thomas. 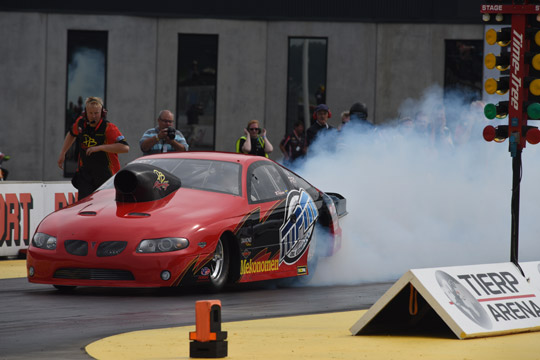 The final driver making the whole tour this year has been Stefan Ernryd in his first full season. Stefan has been getting to grips with the car and the processes steadily throughout the year.  Perhaps the Tierp track would be the one at which he would get everything to come together. 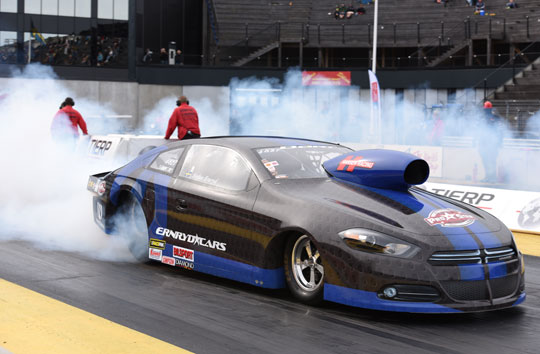 Qualifications
Round one qualification saw Bengt lay down the opening marker at 5.591 Thomas followed him at 6.676 with Richard Sundblom taking the final point for third at 6.86. The remaining positions were taken up by Hannu Kalliomaki, Magnus Petersson, Jonas Boberg, Christian Sagelv and Stefan Ernryd. 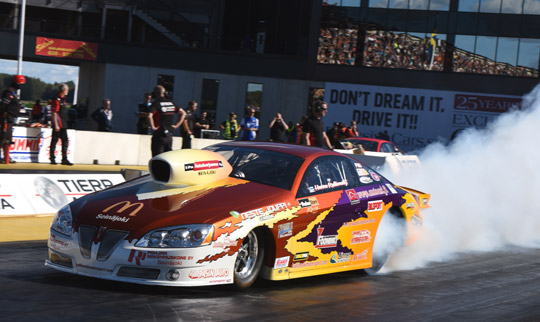 Not qualified at this point were Robin Norén who hit tyre shake and clicked off, Sampsa Palos who could not keep the engine fired after the burn out, Michael Malmgren who did not take part in Q1 and Jimmy Ålund whose run was disqualified by the autobulb system meaning he took too long in stage and did not run to the clocks. 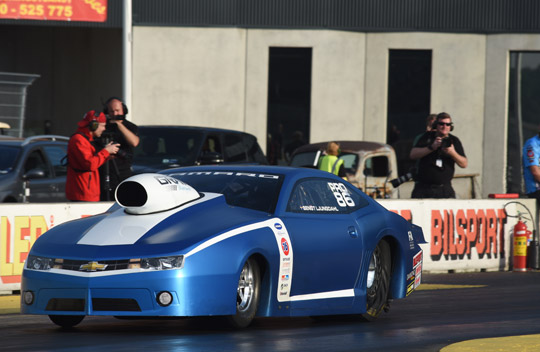 In Round 2 neither Bengt nor Thomas were able to improve on the morning session, but Jimmy managed to go climb the ladder to get between them into second place. Improvements for Stefan and Hannu saw them take 4th and 5th whilst Sampsa moved up to 6th . Richard improved his time but not his position as he was bumped down four places to 7th.  Michael posted his first time of the weekend to take the 8th spot.  This left Robin just outside the qualification ladder followed by Magnus, Jonas and Christian. 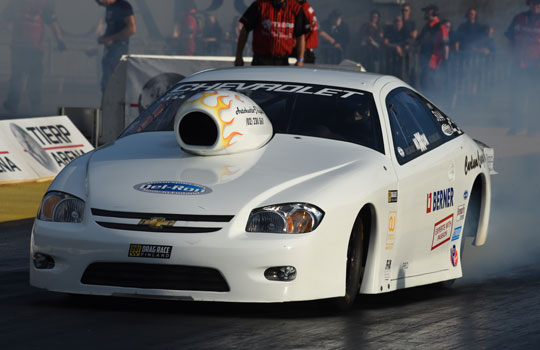 Q3 saw decent improvements for Jimmy, into number one spot (6.526) whilst Thomas managed to take second spot.  Bengt could not improve and sat in third place based on his Q1 time. Improvements for Richard and Michael saw them take 4th and 5th spots, while Stefan and Hannu’s times from Q2 kept hold of the 6th and 7th places for them.  Improvement for Magnus saw him back in the show whilst Sampsa, Robin, Jonas and Christian remained on the outside looking in. The only improvements in session 4 were from Jimmy and Bengt.  Jimmy dropping the number one spot to 6.518 with Bengt improving to 6.539.  The only change to the ladder was a position swap between Bengt and Thomas. 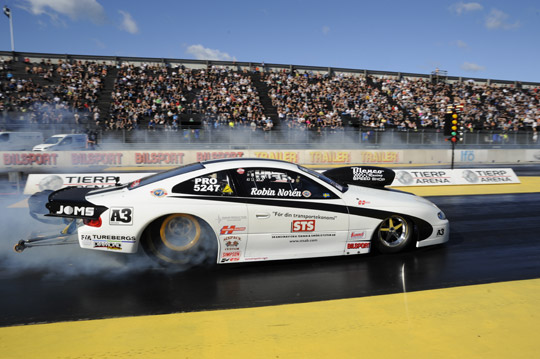 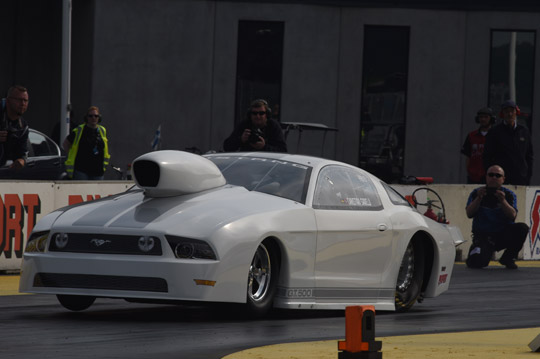 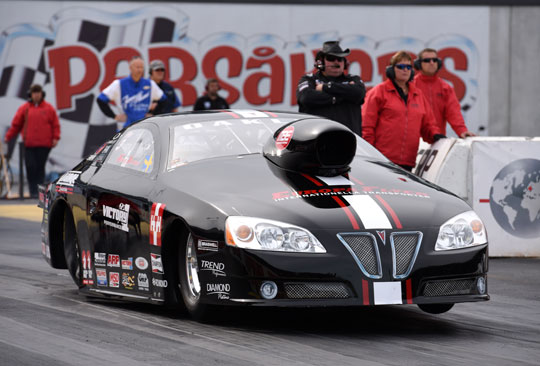 In the first pair Michael took the win as Richards car made a strong enough move to force him to get off the gas. The second race saw Stefan take on Thomas, the ex-sponsor versus his old driver. Stefan had a visibly slower light but then Thomas hit heavy tyre shake and it was all Stefan from then onwards. 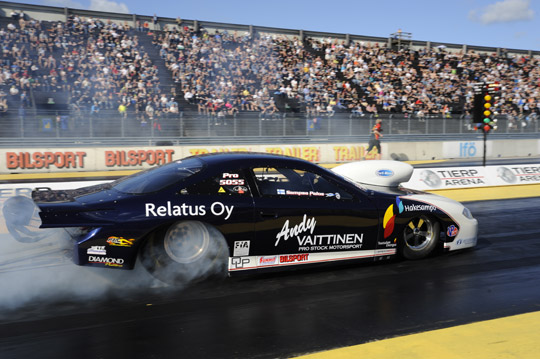 The third pair should have been Bengt against Hannu, but Hannu could not make the call so Sampsa took the call as first alternate. I remember a race at Tierp in 2013 when Sampsa was doubtful that he’d make the call himself and Magnus Petersson in what was then his first season was in the car as first alternate, ready to race when Sampsa and his crew pulled through the tunnel for their elimination.  I wonder if the same memory occurred to Sampsa as he prepared for the race. No matter whether he did or not, Bengt obviously had no negative thoughts in his head as he powered away from a shake affected Sampsa in a new European ET record of 6.4912 beating Jimmy’s previous record by 7 thousandths of a second. If that bothered Jimmy he didn’t show it as he despatched Magnus in the final pair, but Magnus kept him honest all the way, taking the better light and making Jimmy drive past him to take the win. 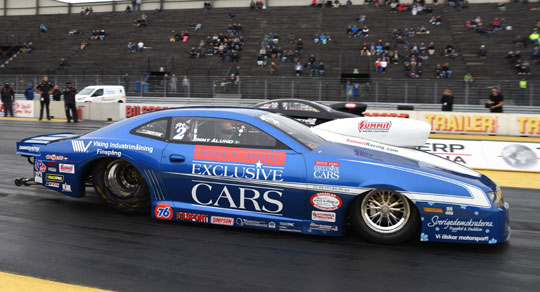 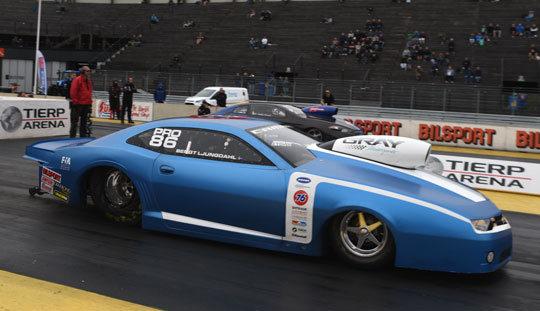 Jimmy defeated Michael. Though both drivers hit shake, Jimmy was able to drive through it whilst Michael was forced to power down and watch as Jimmy took the win. Despite what I think was a PB for Stefan (in competition) he did not have the power to get past Bengt who ran another 6.51 to progress to the final. 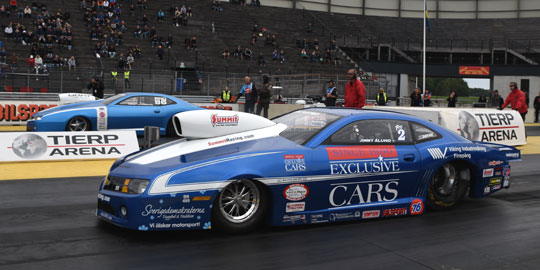 The all blue Camaro final happened again for the second consecutive race.  In Germany it was Jimmy who the event, but in Tierp the tables turned.  Bengt got close to his European ET record clocking a very impressive 6.494, which in itself would have bettered Jimmy’s previous record.  Jimmy not able to respond as shake robbed him of speed and ET. 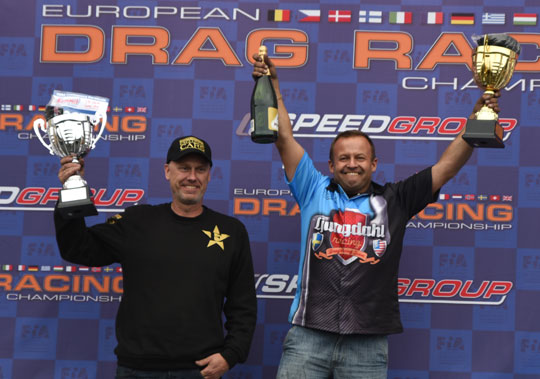 Brief conclusion/ looking ahead towards next event
The Pro Stock cars come to England for the final race of the season from the 8th to 11th September.  At the top of the table we see Jimmy holding just 37 points from Bengt who is 135 points clear of Magnus. Taking no further part in the season in fourth place is Thomas who has just a 23 point lead from Michael and 49 points from Stefan.  This season will be decided by the car that qualifies best and goes the furthest at Santa Pod. Disbarring any mechanical issues, with a five car field at the finals that basically means they have to go to the final to be in with any shout of winning, this also means if only one blue Camaro is on the start line on Sunday afternoon, then that car is the European champion.  As for the rest of the positions, it looks like Thomas will almost certainly drop at least one place, possibly 2 if Stefan make it to the semi’s. It is definitely going to be a close end to the season 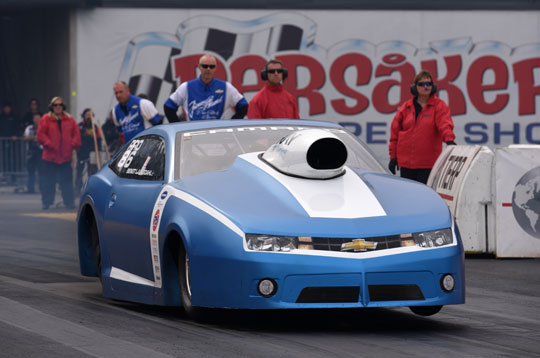 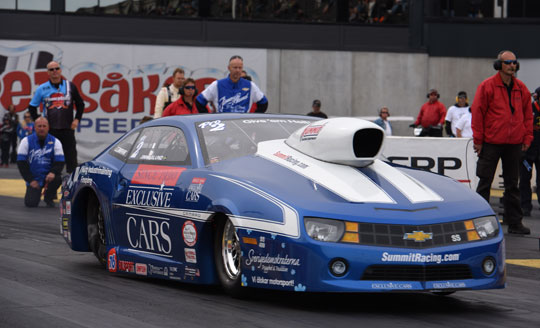 Link to the elimination ladder

Link to championship points standings after the Scandinavian Internationals 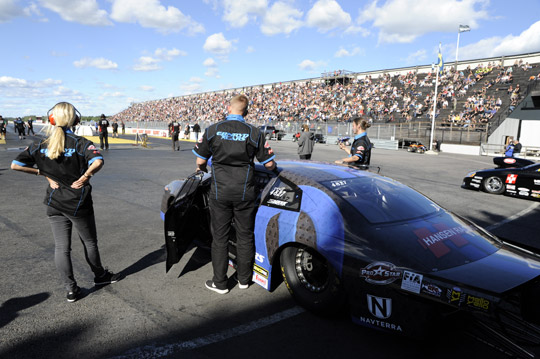