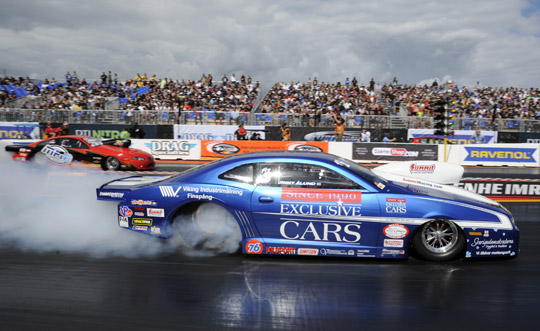 After a break of two years the Pro Stock cars made a return to the Rico Anthes Quartermile in Hockenheim for the NitrOlympX.  As keen followers will recall, the track in 2014 could not hold the power of a Pro Stock car and all teams voted to quit the event after Q1.  No Pro Stock team attended the NitrOlympX in 2015, but they have returned after the track crew adopted a new plan for the preparation and management of the racing surface. It would seem that this new approach has worked as the times in both qualification and eliminations were representative of Pro Stock in full flight.

Thomas Lindström did not attend this race event.  Thomas and Nina are expecting a child due over the same time period as the European Finals, therefore Thomas has reluctantly conceded that he will not be able to fully defend his number one plate and therefore did not enter.  Jimmy Ålund leads the championship from Bengt Ljungdahl as the teams enter Hockenheim.  Magnus Petersson sits in fourth place whilst an uncharacteristically poor year to date for Michael Malmgren sees him down in fifth spot.  The only other driver contesting the full championship is Stefan Ernryd who sits in sixth place as the NitrOlympX begin. 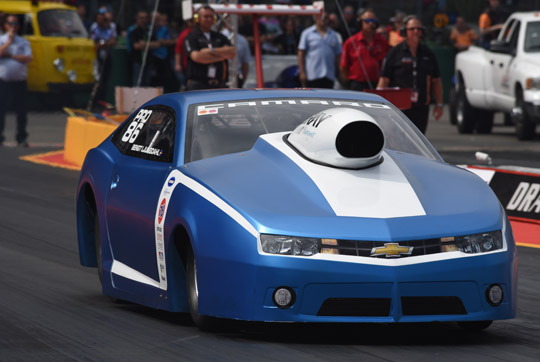 Bengt Ljungdahl has never raced a Pro Stock car at Hockenheim, and therefore has no preconceptions of the track.  This could be an advantage to Bengt, especially if the other teams recall the problems of previous years and decide to play safe.  Bengt has a fast car and is pressurizing Jimmy all the way.  Could he take the points lead in Germany? 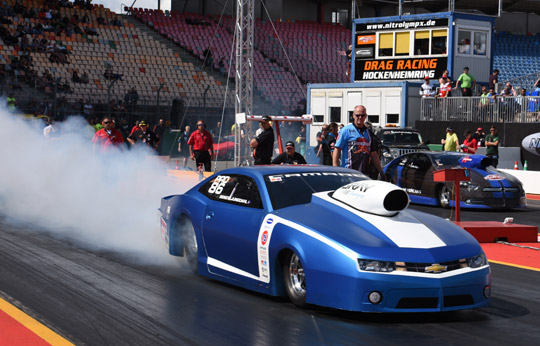 Qualifications:
Q1 saw the power of Bengt’s car evident from the beginning.  Posting a 6.67 lap to take the number one spot.  Jimmy was not far behind at 6.68, whilst Michael sat in third spot at 6.81 ahead of Simon on 6.82.  Fifth was Stefan whilst problems for Magnus saw him take the last qualifying spot. 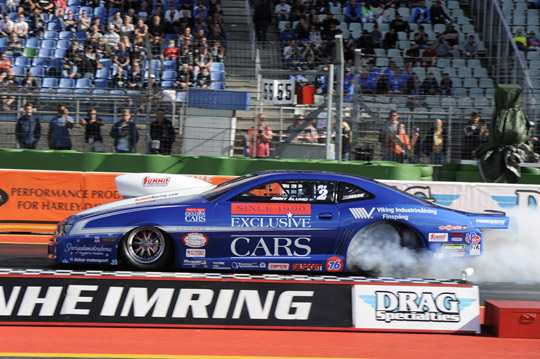 In Q2 Jimmy took the number one place away from Bengt despite the latter’s improved time.  The only other time posted by any racer quicker than their Q1 lap was Stefan, but not by enough to improve his qualifying position. 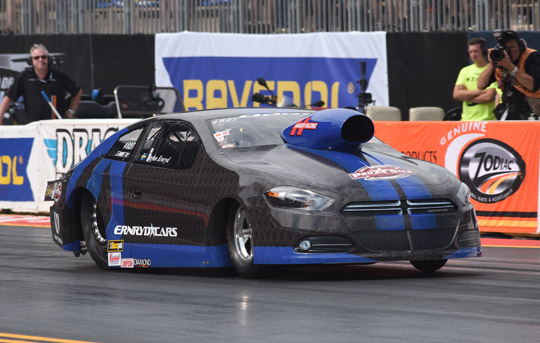 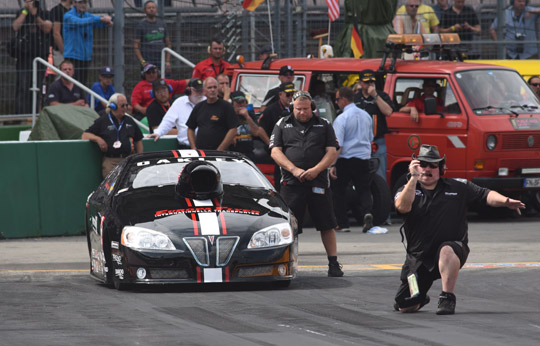 Michael made a great start and held the lead all the way in his race against Simon.  Bengt was handed the race by the autobulb system as Stefan was deemed to have taken too long to stage.  Undeterred Bengt went on to a 6.52 lap, the quickest lap of the weekend and within a couple of hundredths of Jimmy’s European record.  The “other” blue Camaro showing its power and class again. 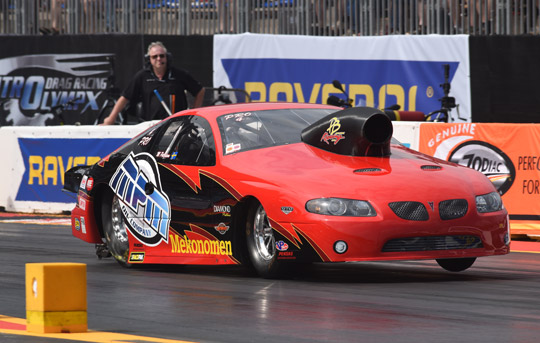 In the final pair, Magnus did everything he could starting with a clear holeshot and then running his best lap of the weekend, but it was not enough to get round Jimmy who reeled him in and passed him to take the win by just 0.03 seconds, not bad when you consider that he gifted Magnus over a tenth on the line. 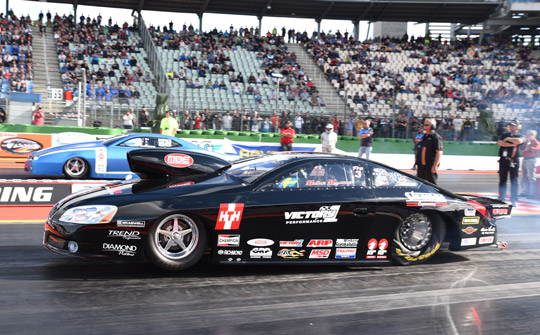 In Round 2 Jimmy got the bye run as number one qualifier whilst the other final position was fought out between Michael and Bengt.  Michael apparently suffering some issues on this run although the cause is unknown to me.  Bengt took the win and tried to take the lane choice but Jimmy’s 6.569 just pipped Bengt’s 6.57.  So it would be an all Blue Camaro final. 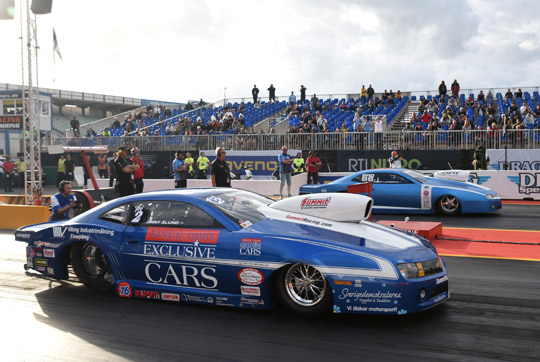 The final was a demonstration of hard charging Pro Stock racing.  Both drivers clocking 6.57 second times, with Bengt actually the quicker of the two by 5 thousandths, however the race was won on the tree as Jimmy got away first by a few hundredths.  Jimmy Ålund took the big trophy home and consolidates his lead in the championship, but it is not a done deal by far. 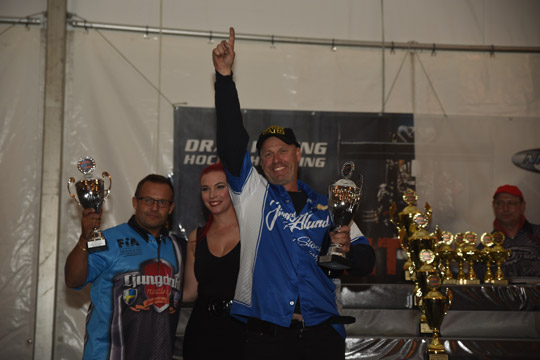 Brief conclusion/ looking ahead towards next event
Jimmy may have all the experience and the racecraft, but Bengt has the car and the set up and knows how to use it.  With Thomas attending Tierp it is possible that he may yet be a key player in the final run to the end of the season.  The final at Hockenheim showed that Bengt can run close with Jimmy and it was only a matter of hundredths on the tree that decided this race.  Jimmy is not getting it all his own way.  Magnus and Michael need good results in Tierp to get properly into the fight for the top places, With a couple of decent results Stefan can move up the ladder as well, so the championship is tight and difficult all the way through.

Link to the championships standings: https://www.dragracingeurope.eu/fiaedc/points-standings/