-This is our biggest drag racing event of the year, says Marcus Wålm who is one of the leading members of the team bringing Vårgårda Dragway back to life again. We will step up from last year when we had some problems with the timing system. This year we have tested the equipment and it is now up to date.

The rest of the season the track is filled with street racing events where drivers can come and try out their street cars and get timed accurately on a safe track, instead of doing it out on the streets.

-We like to get people in to the sport and make them understand it’s better to race on a track than out at the streets with no safety, says Marcus. We also need new people in to the SHRA Borås club.

The building of the racetrack is a long term project. Today the track is 1/8 mile and available for up to Pro Street cars. Vårgårda Nationals is the first event of the 2016 season in EDRS and also a Swedish Championship event for Junior Dragsters. 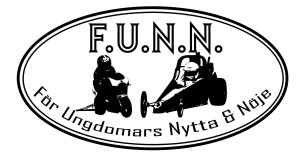 -This year we have a collaboration with F.U.N.N, an organisation that arranges activities for young drivers at the races, says Marcus.

F.U.N.N is a project for young people in drag racing which arranges activities from games and barbeques to educational visits to events where youngsters usually don’t spend time.  The project is a collaboration between Speedgroup and Dominoz to make more out of motorsports events for young performers. And Vårgårda Nationals is the first event of the season to offer these activities.

The story of the track goes back to the 1970’s; a time when Vårgårda Dragway was very famous with thousands of visiting spectators. The final race in the “glory days” of the track was staged in 1977. Since that date, several attempts to revive the track have been made, but none have truly succeeded.  New developments in the last years include a new group of people in SHRA Borås and the Sky Dive club who are working hard to get the track back to a safe and attractive venue for drag racing and airfield shows, taking the venue back to the glory days of old.