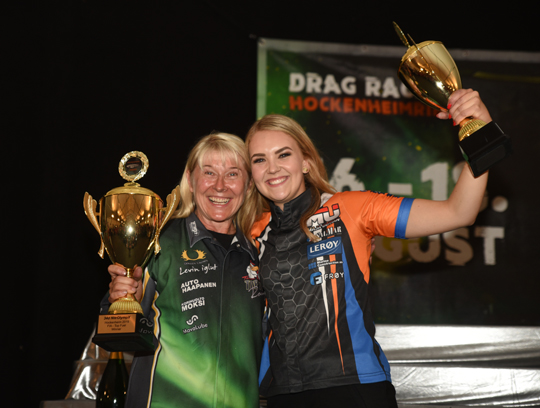 Anita Mäkelä raced to victory in the Top Fuel final of the NitrOlympX, round four of the FIA European Drag Racing Championship at the Rico Anthes Quartermile of the Hockenheimring. The reigning FIA European champion defeated Maja Udtian in an all-female final, the second of this season. In Top Methanol Timo Habermann claimed the win after defeating Jürgen Nagel in an all-German final. Most successful driver at Hockenheim was Jimmy Ålund. The reigning FIA European Pro Modified champion was the winner in Pro Modified and Pro Stock as well. In Pro Modified Ålund defeated Jan Ericsson, and in Pro Stock the Swede was too quick for last year’s NitrOlympX winner Robin Norén.

After the rain on Saturday, the sun was back at the Rico Anthes Quartermile on eliminations day. And once again the track conditions at Hockenheim were excellent and the spectators saw great races in all four categories during the fourth round of the FIA European Drag Racing Championship. 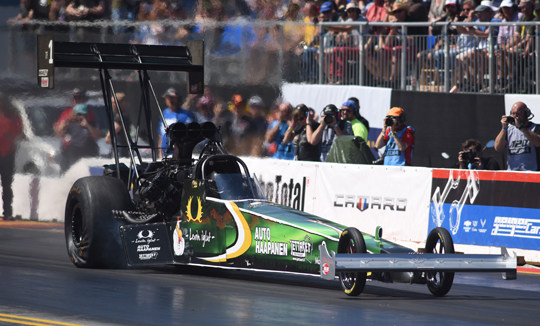 Anita Mäkelä was once again on a mission at Hockenheim. After claiming the number one qualifying position, the reigning FIA European Top Fuel champion from Finland recorded a great 3.93 seconds elapsed time in the first round of eliminations, and then defeated Jndia Erbacher in an all-female semifinal with another great 3.92 seconds. On the other side of the elimination ladder Maja Udtian, the 21-year-old  driver from Norway, defeated Urs Erbacher in the first round and then had to face her Rune Fjeld Motorsport team mate Liam Jones. In a great race Udtian claimed the victory, thus after the race at Santa Pod, for the second time this season the final was an all-female final. It was also a confrontation between the numbers one and two qualifiers and number one and two in the championship. 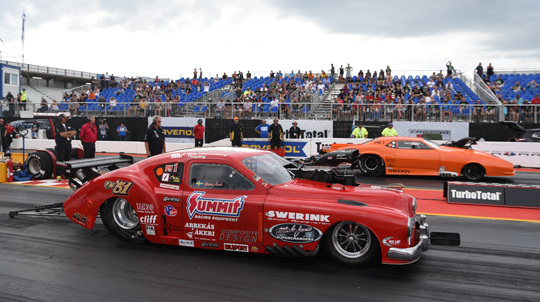 Pro Modified was once again spectacular and exciting as well with some major upsets. But in the end the numbers one and two qualifiers, Jan Ericsson and Jimmy Ålund, who were both quick and consistent as well, advanced to the final. Ericsson, the current leader in the championship, defeated Marcus Hilt, Michel Tooren and then advanced to the final when Michael Gullqvist pulled a red light in the semifinal. On the other side of the elimination ladder Ålund was too quick for Ingo Ekert in the first round and saw Peter Kunc pull a red light in the quarter final. In the semifinal Ålund had to face David Vegter from the Netherlands, but the number three qualifier suffered some engine damage in the quarter final and couldn’t come back for the semifinal. In the final it was Ericsson who pulled a red light, handing the win to reigning FIA European Pro Modified champion Ålund. 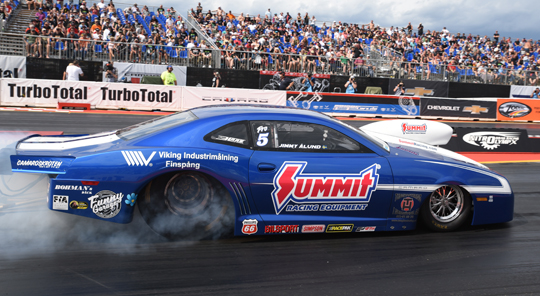 And there was even more success for Ålund. The number one qualifier in the Pro Stock category defeated Simon Gustafsson in the first round and advanced to the final after a bye run in the semifinal. On the other side of the ladder Robin Norén defeated Michael Malmgren, the number two in the championship, in the first round and then had to face reigning champion Bengt Ljungdahl in the semifinal. But Ljungdahl had some problems with his car and couldn’t start, handing the win to Norén, last year’s winner at Hockenheim.

In the final it was once again Ålund, the 10-time European Pro Stock champions, who claimed the victory in 6.65 seconds. For Ålund it was his third Pro Stock win out of four races this season and, after Finland last year, the seconds time that he won both Pro Stock and Pro Modified as well. 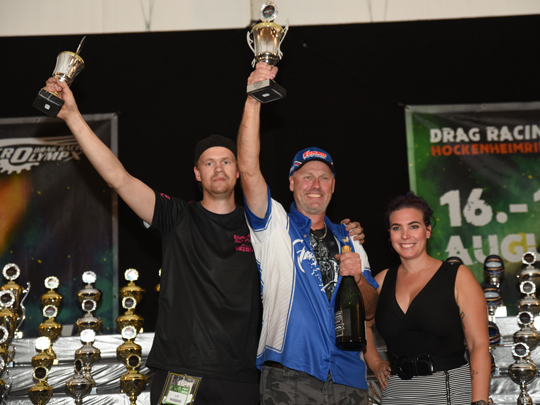 In Top Methanol there were some major upsets in eliminations. Jonny Lagg, the number one qualifier and number two in the championship, was defeated on a holeshot by Jürgen Nagel, who then advanced to the final after a bye run in the semifinal. On the other side of the ladder Sandro Bellio, the number one in the championship, won his first round over Silvio Strauch, but was then defeated by Timo Habermann in the semifinal. In the all-German final Nagel pulled a red light, handing the win to Habermann.