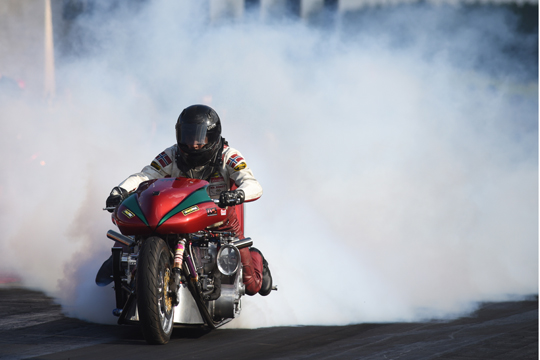 The Summit Racing Equipment Internationals is the fourth round and grand finale of the 2019 EDRS Pro Nordic Motorcycle Championship. Two months after the kick off, the EDRS Pro Nordic MC is back at Tierp Arena. Thomas Pettersson (Top Fuel Motorcycle), Marcus Christiansen (Super Twin Motorcycle), Vesa Ruhanen (Super Street Bike) and Fredrik Fredlund (Pro Stock Motorcycle) enter the final round as the leader in their respective categories. But one thing is for sure, not all four riders will claim the title, while all title contenders will have a tough fight for the final and decisive points. Peter Östlund and Heikki-Juhani Koskinen are the leaders in EDRS Pro Nordic MC Super Comp Bike and Super Gas Bike, and also in these two categories the last race of the season can make the difference between glory and disappointment.

The EDRS Pro Nordic Motorcycle Championship started the season with the Tierp and Kauhava rounds, races that were also part of the FIM Europe European Drag Bike Championship (Tierp not for the Super Street Bike). With the addition of some very quick European championship riders, the EDRS Pro Nordic MC fields were stronger than ever before, and that gave the riders who were only hunting after the EDRS Pro Nordic MC crowns some very tough competition.  After Gardermoen it was getting more clear who were still in the title race, and at Tierp Arena it’s time for the grand finale. There are still many points to win, but with 30 instead of last year’s 100 bonus points for the riders who attended all four races, it’s also possible that a rider who skipped one round claims the title. 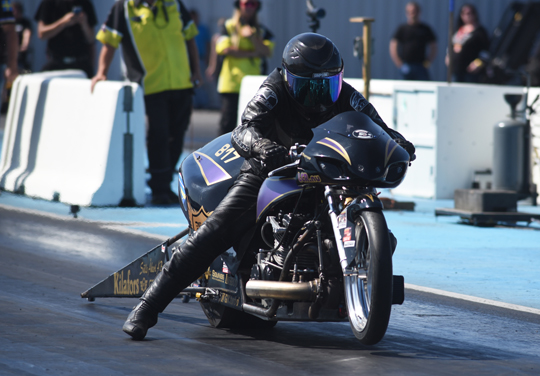 With a win at Gardermoen Raceway Thomas Pettersson took over the lead in the championship from Filippos Papafilippou, winner of the first two rounds of the championship. The reigning champion will meet some tough competition from Gardermoen runner-up and number two in the title race, Jan Sturla Hegre. 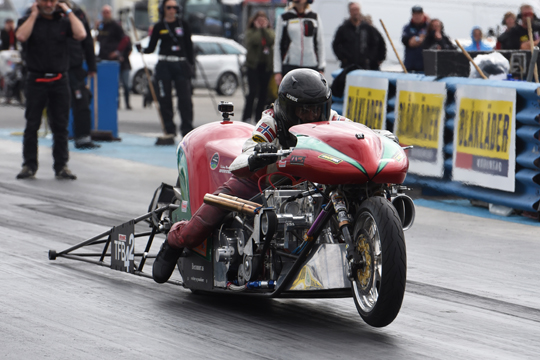 The Norwegian Uggerud Bros. Top Fuel Motorcycle is quicker, but Pettersson’s Funny Bike is far more consistent this season, thus the Swedish rider is leading the championship with a 40-point advantage over Hegre. Papafilippou and Rikard Gustafsson, the numbers three and four in the championship, will focus on the FIM series, and the two riders who had some great side-by-side races earlier this season, will not defend a top three position. Hans Eriksson scored some valuable points at Gardermoen and he is the number five in the championship. 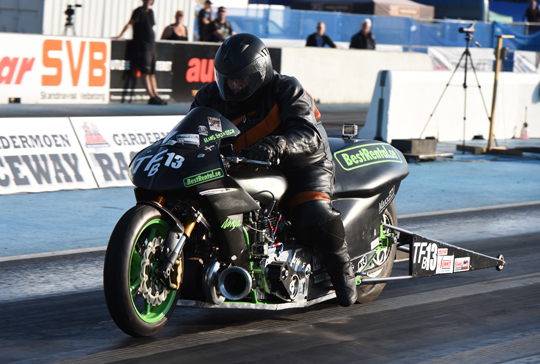 Tierp Arena will see an invasion of no fewer than four Salakari built bikes in Top Fuel Motorcycles. We all know these combinations can be extremely quick, and although not so consistent, it can be enough to destroy someone’s championship dreams in the first round of eliminations. 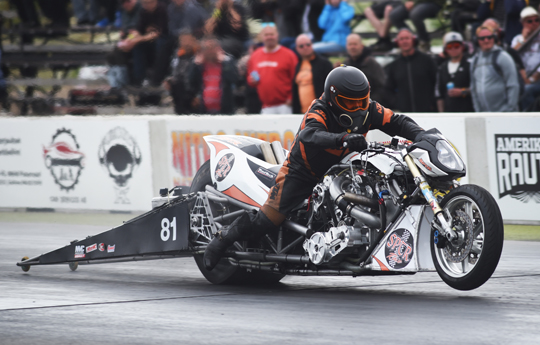 Willem Been will have his third race of the season with the KTM, for Vesa Lipponen it will be his second outing, while Aku Lantto and Jaska Salakari will both make their season debut in the EDRS Pro Nordic MC Top Fuel Motorcycle category. Peter Andersson and Peter Andersson-Ström are back for their second EDRS Pro Nordic MC race of the season and the two Swedes bring the number of entrants at Tierp up to nine. 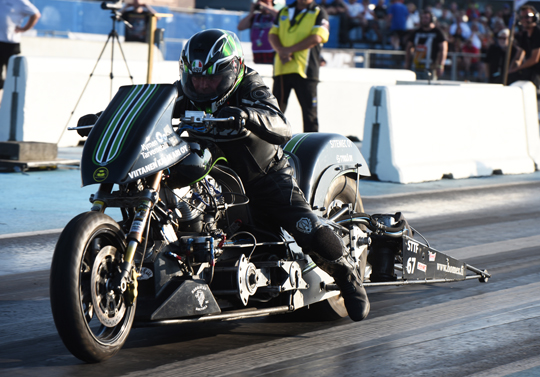 Marcus Christiansen is the reigning champion in Super Twin Motorcycle, and although the rider from Denmark is also the current leader, he will not retain his title. Christiansen claimed the victory at Tierp in June and was the runner-up at Kauhava. But Christiansen skipped the race at Gardermoen, and will also not be at Tierp to focus on the FIM series. Torsti Kettula, from Finland, scored points in all three races, with a runner-up position in Norway as his best result so far. The Finn is only 13 points behind Christiansen in second position and can go for the title at Tierp. 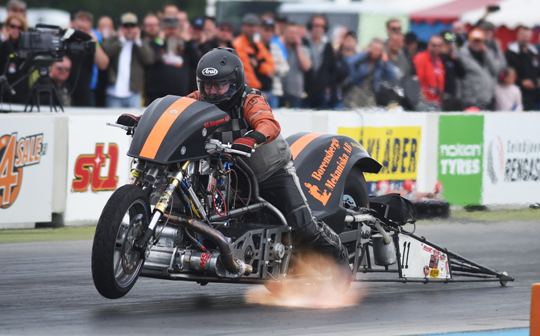 But Kettula will meet tough competition from Greger Johansson. The rider from Sweden had a difficult start of the season, but scored points in all three races and claimed the victory at Gardermoen. Johansson is only 17 points behind Kettula and might be the man to beat. 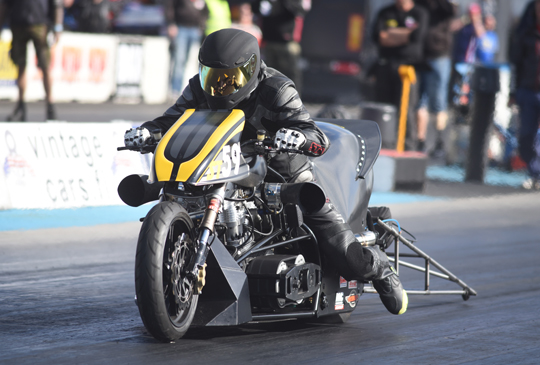 Harri Piensalmi was the surprise winner at Kauhava, but the Finn skipped Gardermoen and without the 30 bonus points, the number four in the championship will need another great score to go for the title. 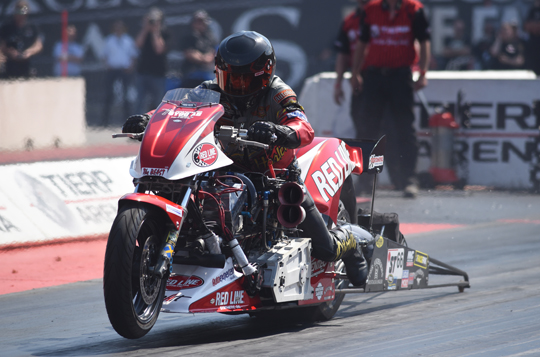 Tierp will have several favourites for the race win, but for these riders the title is out of reach. Former champions Samu Kemppainen and Tommy Grimes Jr. are extremely quick and would like to end their 2019 EDRS Pro Nordic MC campaign with a race win. Svein Olav Rolfstad proved his speed several times, but was also hit by mechanical problems. Kristin Hegre, Trond Høiberget and Erling Opheim are the next three riders from Norway, while Teemu Kettula brings the number of Finnish competitors up to four. Last but not least Roman Sixta is back after he skipped Gardermoen, and although the rider from the Czech Republic is eleventh in the championship, he can make up many places with a good result at Tierp.  With eleven riders for an 8-bike elimination ladder, qualifying is once again very important at the final race of the season. 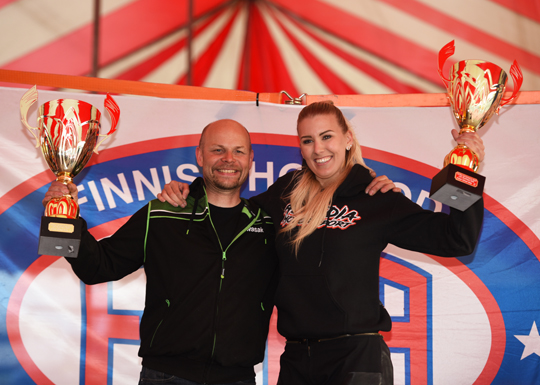 Probably the most attention will go out to the title fight in the EDRS Pro Nordic MC Super Street Bike category. Vesa Ruhanen dominated the first two races of the season, claiming two wins and, what looked like, a comfortable lead in the championship. 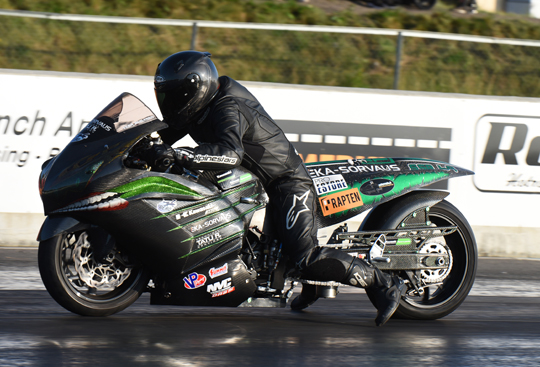 But Ida Zetterström improved every  race and kept in touch with the leader. The Finnish rider started the season on her new Lucky 13 bike with a semifinal finish, followed by a runner-up position at Kauhava. But Gardermoen was Zetterström’s real moment of glory as she claimed the victory in a new personal best and became the first female rider to win a race in the EDRS Pro Nordic MC SSB category. 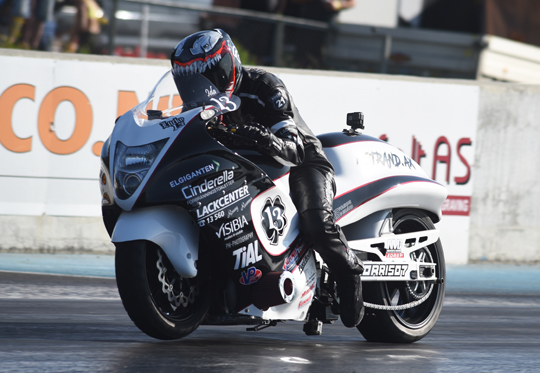 Zetterström closed the gap to Ruhanen to 15 points, thus everything is possible, and we might see the first ever female SSB champion in the history of the EDRS Pro Nordic MC. 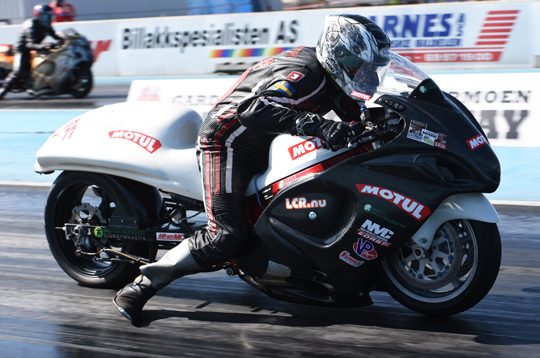 Anders Blanck is the number three in the championship, but the rider with a Norwegian licence is 106 points behind leader Ruhanen. Kimmo Pulakka is the number four, but the rider from Finland suffered severe engine damage at Gardermoen and had to withdraw his entry for Tierp. 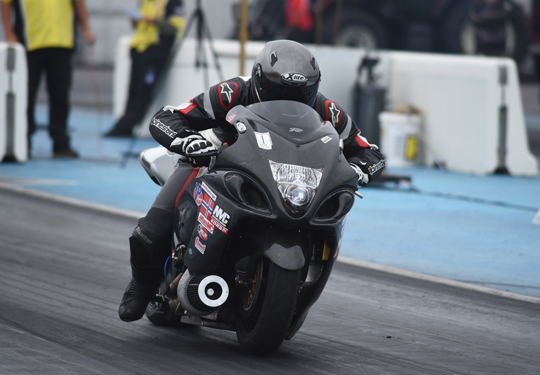 Mathias Bohlin was extremely quick in qualifying at Tierp in June, but was then hit by traction problems in eliminations and also skipped Kauhava. That diminished his title chances and although the reigning champion was back to form with a runner-up finish at Gardermoen, he is way back in fifth position, 171 points short of the number one. 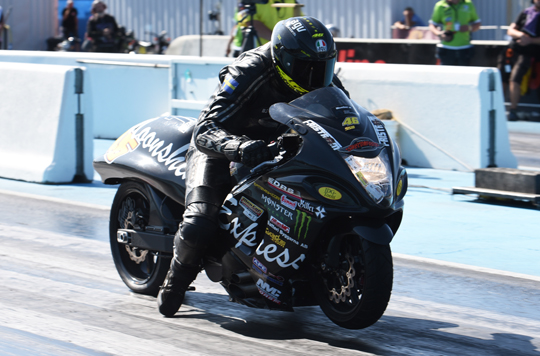 Björn Friström, Dag Wagenius and Roberth Häggblom are the numbers six, seven and eight in the championship and they are all back for more at Tierp. Including these riders, the top eight (except Pulakka) will be present in the final race of the season. Arvid Gerdtsson, from Sweden, and Ole Johnny Johnsen and Arild Rundbraaten, both from Norway, might not be among the favourites to win the race, but as we have seen before, never underestimate a competitor in SSB. 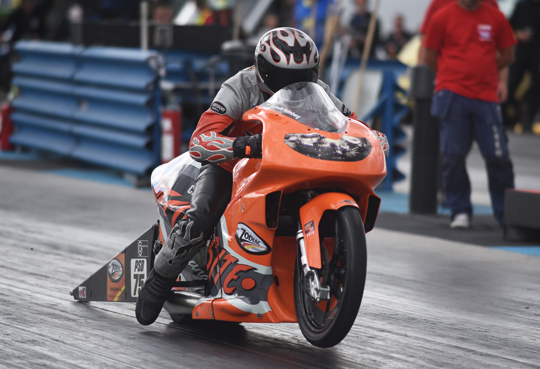 In Pro Stock Motorcycle Fredrik Fredlund is in the number one position, with his countryman Janne Koskinen in second position. Both riders will focus on the FIM series and will not be at Tierp, but there is still a chance that Fredlund claims the title. Kenneth Holmberg is in third position, but 70 points behind Fredlund, and the Swecomposite rider will need a reasonable score to pass the leader. The same is true for Kalle Lyrén. The former champion won the opening round at Tierp, but was not at Kauhava and Gardermoen and is 103 points behind leader Fredlund. 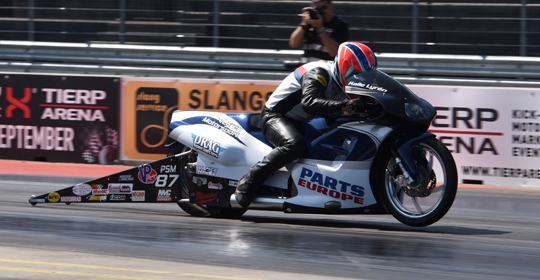 For Timo Savolainen and Bo Thorselius the Summit Racing Equipment Internationals is the first EDRS Pro Nordic MC race of the season. With four riders, the Pro Stock Motorcycle category is not the most competitive class at Tierp, but it will be interested so see if Lyrén can reset records again and if he can catch that number one plate. 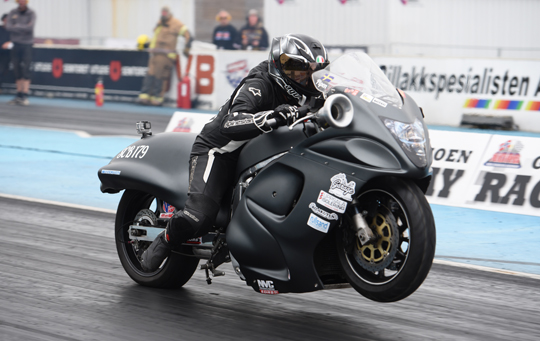 Super Comp Bike has no fewer than 16 entrants at Tierp and although reigning champion Peter Östlund is the clear favourite to clinch another title, the fight is not over yet. Östlund is the only rider to claim the 30 bonus points, but due to an early exit at Gardermoen and a win of Peter Svensson, the number two in the title race reduced the gap with 58 points to 38 points. 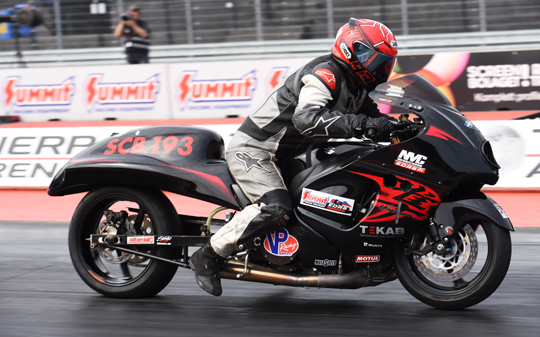 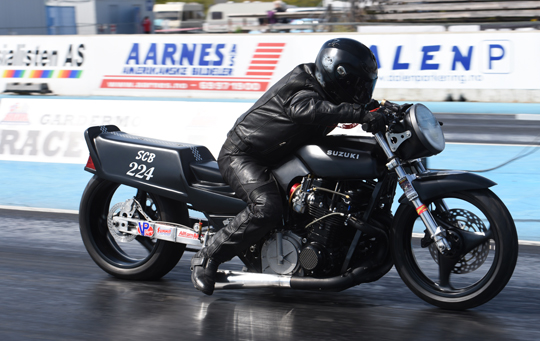 In the 16-bike field we see some familiar names like Emil Östlund, Tony Andersson, Björn Linde, Per Olsen and Andreas Ramkvist, but it’s also good to see new riders we haven’t seen before this season or, in some cases, are totally new to the 8.5-second index class, like Göran Bodsäter, Jesper Jerresten, Jens Karlsson, Tage Olsson, Peter Rundström and Magnus Wimark. 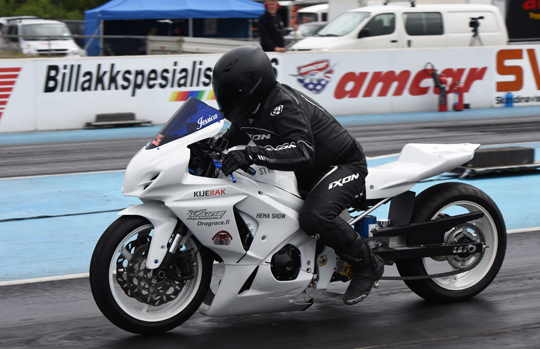 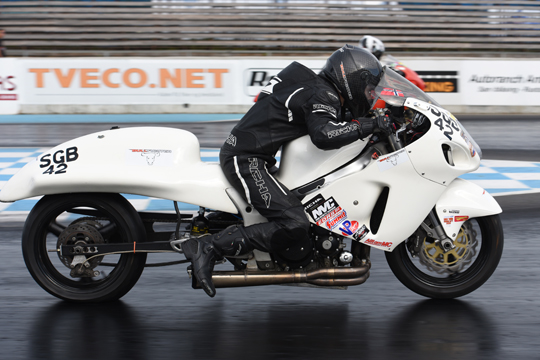 Trygve Kjærstad Helgerud was the winner at Tierp in June, but skipped the race in Finland and is the current number two in the championship. 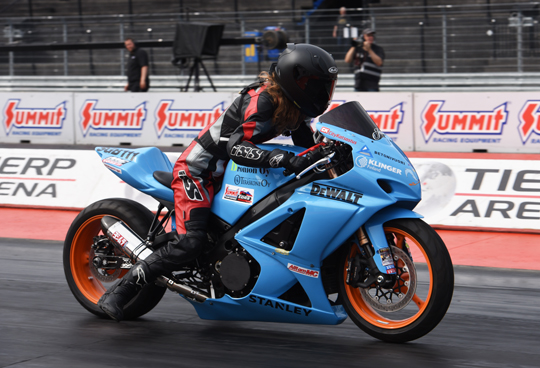 Jenni Pekkarinen was the leader after two races, but the Finnish rider skipped the Gardermoen round and will enter the final race as the number three in the championship, 70 points short of her countryman Koskinen. Bo Sørensen, from Denmark, scored valuable points in Norway and is the number four with 175 points. 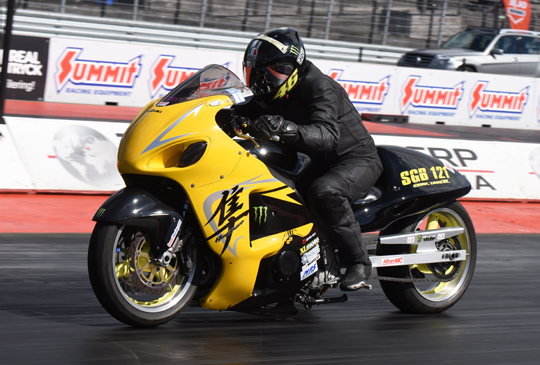 Super Gas Bike has a healthy number of 12 entrants at Tierp. Apart from the top four in the championship, we see more familiar names like, Kim Hilander, Juha Komulainen, Magnus Pollack and Risto Torniainen, but also some new riders like Niklas Ekstrand, Robert Nygren, Jari Pehkola and Linus Tröjbom-Berggren.