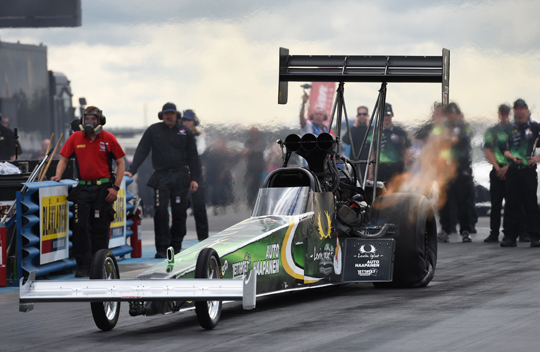 The 2019 FIA European Drag Racing Championship is at the halfway point of the season and after the summer break part two kicks off in high gear with in back-to-back weekends the NitrOlympX at Hockenheim in Germany and the Summit Racing Equipment Internationals at Tierp Arena in Sweden. For the drivers and teams not only a tight schedule, but in seven days the positions of the current leaders Anita Mäkelä (Top Fuel), Sandro Bellio (Top Methanol), Jimmy Ålund (Pro Stock) and Jan Ericsson (Pro Modified) can change dramatically. Will they be able to strengthen their positions in Germany and Sweden, or will the fight become even closer?

Round four of the championship is from August 16th – 18th at the Rico Anthes Quartermile of the HockenheimRing, and one week later (August 22nd – 25th) the state-of-the-art Tierp Arena hosts round number five. 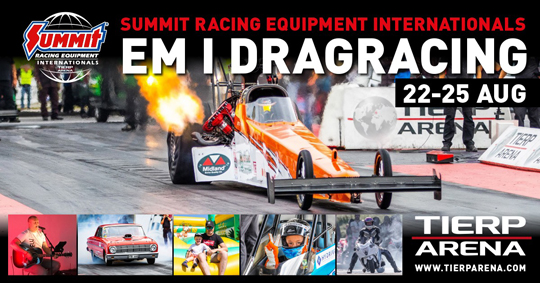 Of the current championship leaders only Sandro Bellio was really successful in the latest championship round at Kauhava in Finland, as the Belgian Top Methanol driver won the race and took over the number one position. All the other leaders were defeated before the finals and saw their pursuers closing in. Is it a sign for the things to come in Germany and Sweden? 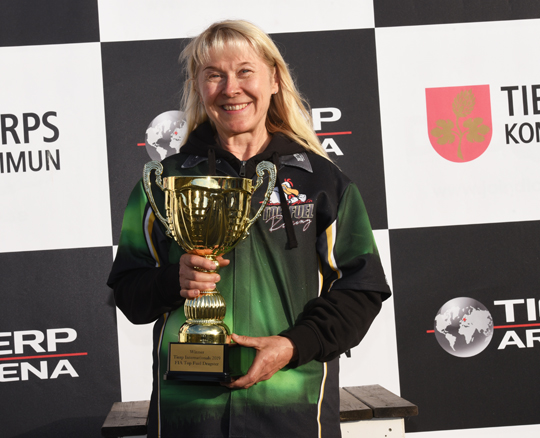 Anita Mäkelä is the leader in Top Fuel after three races. The Finnish driver and reigning champion dominated the first two races of the season and was the quickest in qualifying at Kauhava, but then she was surprisingly defeated in the first round. 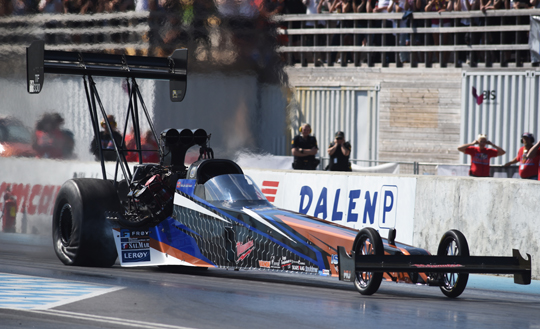 That gave Maja Udtian the opportunity to reduce the gap to Mäkelä to 46 points. In her first full FIA European Championship season the 21-year old Norwegian driver scored two runner-up finishes and the only thing the popular Rune Fjeld Motorsport driver is waiting for is a race win. 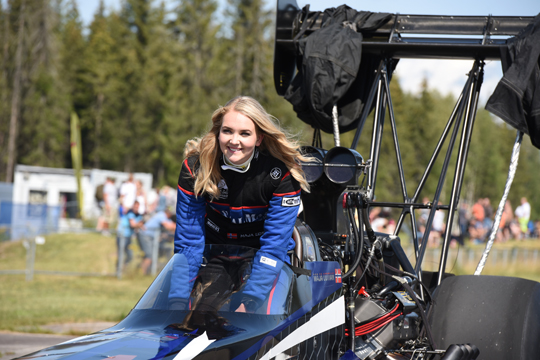 That win is only a matter of time and don’t be surprised if that happens in Hockenheim or Tierp, where Udtian came close to the European record in June. 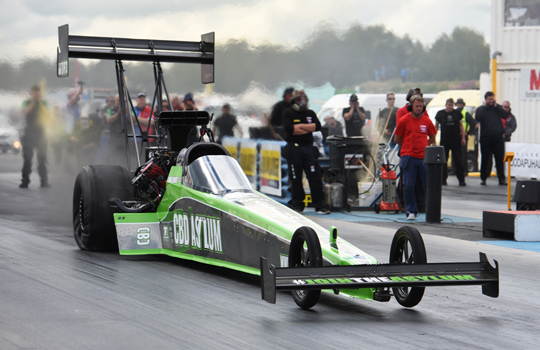 Udtian’s RF Motorsport team mate Liam Jones from the UK is the number three in the championship. The CBD Asylum driver is the defending NitrOlympX champion and Jones will be eager to take that trophy again. 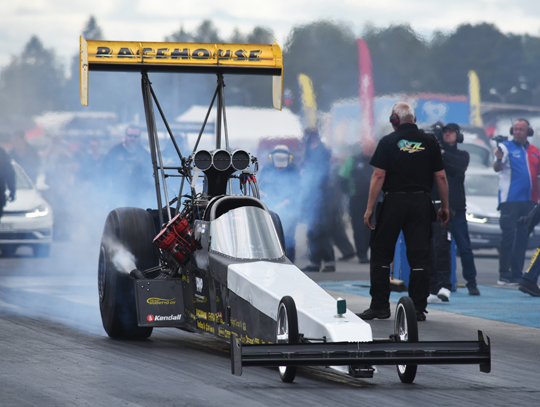 Timo Lehtimäki is the number four in the championship, but the surprise winner of his home race at Kauhava will not be in Germany and will resume his season at Tierp. Stig Neergaard is the number five in the title race. The Danish Lucas Oil driver hasn’t had his best season so far and is still looking for his first elimination round win of the season. Mikael Kågered is the number six, but the runner-up of the Tierp race in June skipped the race in Finland, thus the multiple champion from Sweden is pretty far behind in the title race. But Kågered has always scored good results at Hockenheim and that might bring him back in the race for a top three position. 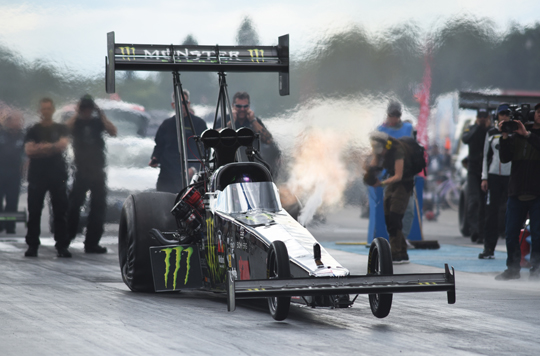 The NitrOlympX is the home race for Urs and Jndia Erbacher. The Swiss father and daughter team will get the support of numerous colourful fans at Hockenheim. Jndia Erbacher is doing the full FIA tour, but the 25-year-old Monster Energy driver has been very unlucky so far and is in seventh position in the championship. Hockenheim would be the perfect place for the turning point of her season. Her father Urs Erbacher is doing a limited schedule this season. The multiple FIA European champion announced his retirement several times, but was back in action in Kauhava. The NitrOlympX is a safe bet on the Swiss driver’s calendar, and strange things must happen for him not to return next year and the years beyond as well. 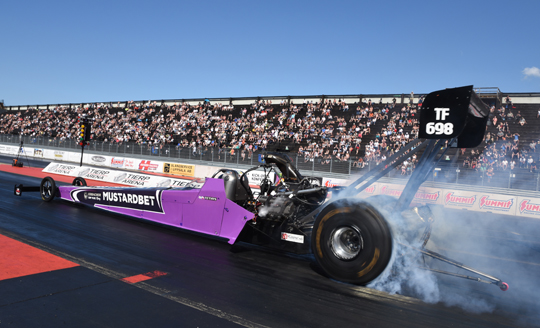 With seven entrants for an 8-car elimination ladder there is no qualification stress at Hockenheim. But that will be totally different one week later during the Summit Racing Equipment Internationals at Tierp Arena, where we see no fewer than ten entrants in Top Fuel. Compared to the Hockenheim entry list Urs Erbacher will be missing, but his car will be in Sweden with Tethys behind the wheel again. With the support of MustardBet the driver from the UK started at Santa Pod and Tierp and will be back for the last two races of the season at the same tracks in the second Erbacher Racing car. Dennis Nilsson and Patrik Pers were also present at Tierp in June and the two Swedes will be back for more in August. A driver who will be sadly missed is Björn Mårtensson. The Swede died last week after suffering a heart attack. 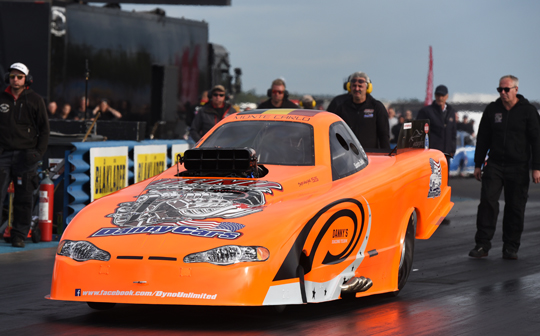 With a win at Kauhava, Sandro Bellio took over the lead in the FIA European Top Methanol Championship from Jonny Lagg. The Belgian Funny Car driver was also the winner at Santa Pod, but saw Lagg take the victory at his home track in Sweden. In his first Top Methanol race Silvio Strauch was the surprise runner-up at Tierp and the German rookie is back at his home track for race number two. 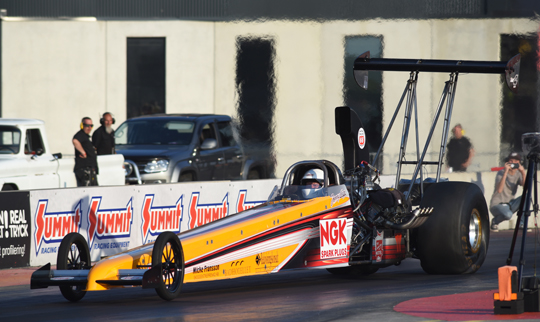 It’s also great to see the return of Dennis and Timo Habermann. Last year’s numbers one and two in the championship decided to run a very limited schedule this season and they will start their season at their home track Hockenheim. The two brothers will have no chance in the title race, but for sure they will be back to form immediately and they can spoil the championship dreams of some other drivers. Also back at Hockenheim is Jürgen Nagel, where the veteran Funny Car driver will have his first race of the season. 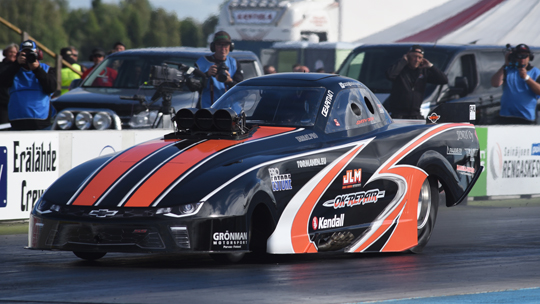 With four vs two there are more dragsters than Funny Cars at Hockenheim. One week later this ratio is different with five Funny Cars and two dragsters. The Habermann brothers will not be in Tierp, and the same is true for Nagel. But in Sweden Daniel Jedborn, the surprise number one qualifier of the Tierp race in June, is back in action. Johnny Oksa and Ari Pietilä started their season at Kauhava and both Finns will be back for more in Sweden. 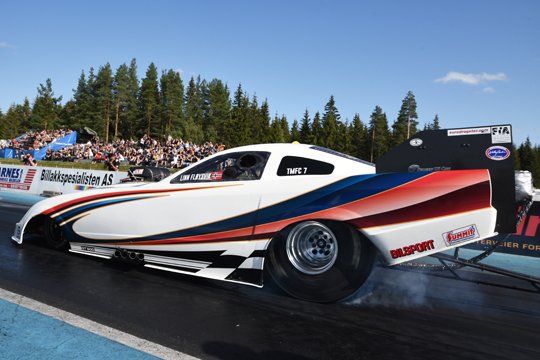 With a new Jonnie Lindberg built engine in her Funny Car Linn Engan Fløysvik (née Karlsen) made some very promising test runs at her home track Gardermoen Raceway. Tierp will see the return of this young Norwegian Funny Car talent. After major mechanical problems last season, Mikael Larsson used last winter and the start of the season to regroup. At his home track Tierp the Swede will be back, and that will bring the number of Funny Cars up to five. 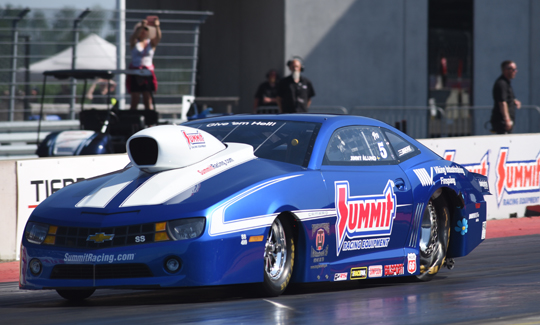 Pro Stock will have six competitors at Hockenheim and they are also the top six in the championship standing. With two wins, Jimmy Ålund is leading the championship with a very strong Michael Malmgren in second position. 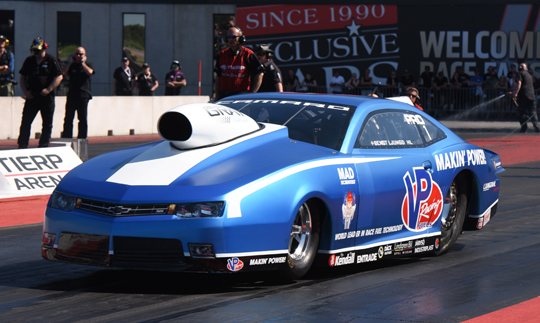 Bengt Ljungdahl didn’t have the best start of the season, but the reigning champion was back in Kauhava where he made up some ground with a runner-up finish. 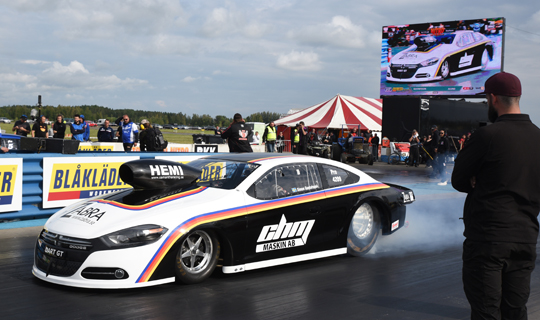 Simon Gustafsson is the surprise number four after his stunning win in Finland. Robin Norén was the winner at Hockenheim last year and the number five in the championship is eager to win his first race of this season in Germany. 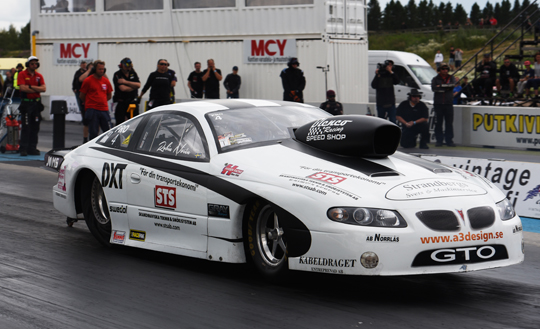 Stefan Ernryd entered last year’s NitrOlympX as the leader in the championship, but after some mechanical and traction issues the 2018 runner-up is now in sixth position and definitely out for revenge with his now pink coloured Dodge Dart. 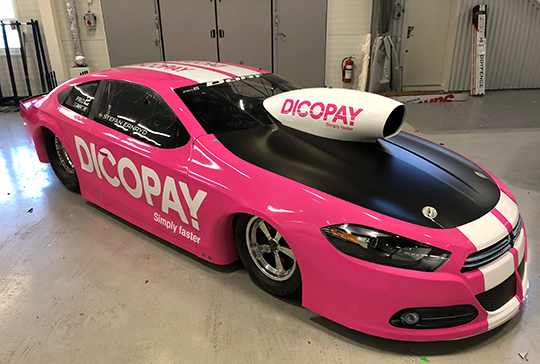 The Pro Stock class has its roots in Sweden and that will once again be visible at Tierp, where the number of entrants compared to Hockenheim will be doubled to twelve. The six from Hockenheim will be accompanied by Thomas Lindström, Magnus Petersson, Christian Sagelv and Jonas Boberg, all from Sweden. Sampsa Palos is also back for his second race of the season, while Richard Sundblom, also from Finland, is back after a one year break for his first race of the season. 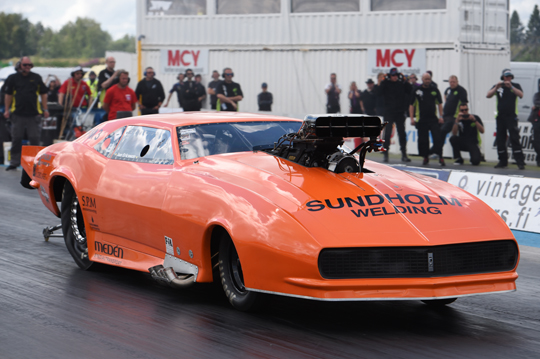 The FIA European Pro Modified Championship has always been exciting, but this season the title fight is extremely close with three different winners out of three races and the top six separated by only 55 points. Jan Ericsson claimed the victory at Tierp and is still leading the championship, although the Swede was defeated in the quarter finals at Kauhava. 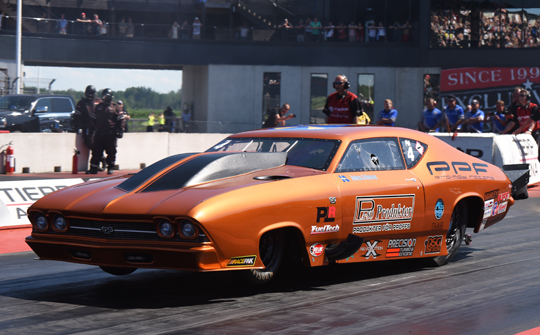 Only 16 points short of Ericsson is Andreas Arthursson, who closed the gap with a runner-up finish in Finland. Michael Gullqvist is in the number three position, but the winner of the opening round at Santa Pod lost many points in Tierp and Finland. Jimmy Ålund is in fourth position, but without a win or runner-up finish, the reigning champion hasn’t had the best start of the season. But being only 44 points behind the leader, everything is still possible for Ålund. 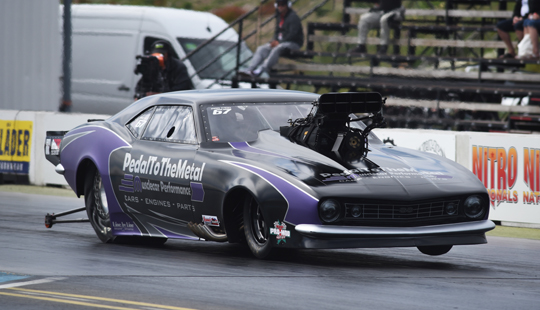 David Vegter and Mats Eriksson are separated by only two points and they are the numbers five and six in the championship with plenty of chances to gain some positions. Vegter stepped up with personal bests, a stunning track record at Kauhava and a runner-up finish at Tierp, but a first round exit in Finland was not good for the Dutchman’s title aspirations. 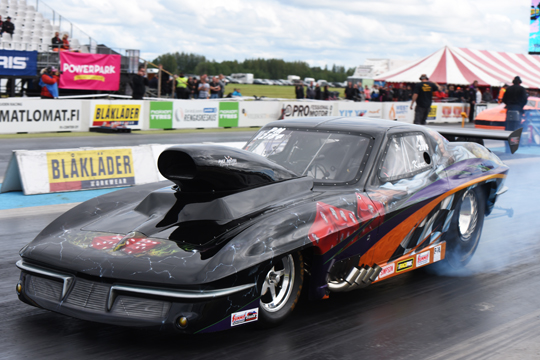 Peter Kunc stunned with a win in Kauhava and the Swede is seventh in the championship, with Roger Johansson eighth, Kim Kristiansen ninth and Michel Tooren tenth. With Jere Rantaniemi from Finland and Dmitry Samorukov on the Hockenheim entry list, only Fredrik Fagerström is missing from the top 13 in the championship. 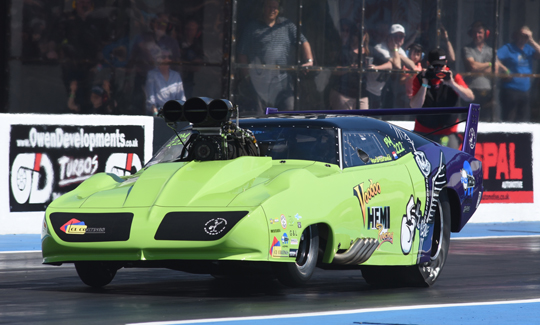 Not in the FIA championship race but feared by many is Marck Harteveld. The Dutch Voodoo Hemi Racing driver is always good at Hockenheim and is leading the British Motorsport UK Championship after some stunning performances at Santa Pod. Marcus Perman is one of the many quick Pro Mod drivers from Sweden, while regular Hockenheim competitors Jean Dulamon (France) and Marcus Hilt (Switzerland) are also back. After his Pro Modified debut at Santa Pod, John Tebenham is back for this second FIA race of the season, while Ingo Ekert steps up to Pro Mod with the Dodge Challenger he used to enter in Competition Eliminator. It’s great to see Norbert Kuno back on track after the German Lucas Oil driver crashed his Dodge in the opening round of the championship at Santa Pod. With 19 entrants the NitrOlympX will see some tough qualifying. 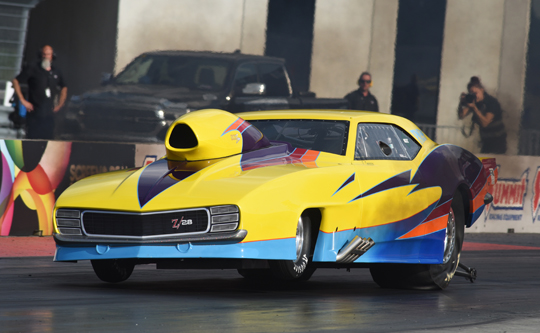 As we have seen before, the Pro Mod entry list of Tierp Arena is pretty different, but with 23 entrants for an 16-car ladder, qualifying will be even closer. The complete top 12 of the current championship standing will be at Tierp, including Fagerström, but at Tierp Arena some more quick Swedish Pro Mods will rejoin the tour. Åke Persson, Lars Järpler, Rolf Simonsson, Micke Johansson and Michael Joneskog are only a few of the drivers who can surprise the title favourites. Olof Andersson and Jan Brännvall are drivers from Sweden we have seen before at Tierp, but Erik Andersson is a new name on the FIA European Championship tour. Stian Rusånes is the only driver from Norway on the Tierp entry list, while Mikko Saarinen brings the number of Finnish Pro Mods up to two.