A hot and busy weekend at Mantorp Park

A tuff schedule, some showers made it hard to fit in all cars at Mantorp Park last weekend. But a Top Doorslammer winner was crowned and a Pro ET Super Series driver is clear for the Finals at Tierp Arena in a few weeks.

The biggest class of all, this weekend, was Pro ET with 63 participators. They were up to the quarter finals when the track crew had to shut of the event due to delays by rain and curfew. So, the driver who´s going to be sent to the Super Series Finals at Tierp is Martin Larsson, who was at the top of the point when the event had to shut down.  And he has now the opportunity to race vs his dad Jonas Larsson who won in Fällfors recently. 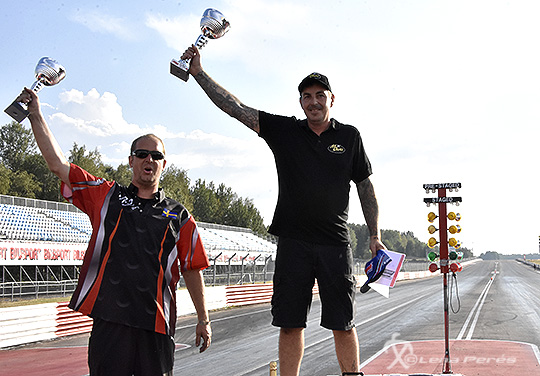 Micke Nord won Top Doorslammer, beat the fastest driver of the weekend, Mattias Wulcan who did a 3,82 sec run in the elimination. Caroline Strand did well in qualifications with a 3.88 sec run and took the top position in the qualification list. But sadly, there was problems with the car and she had to leave walk over for elimination.