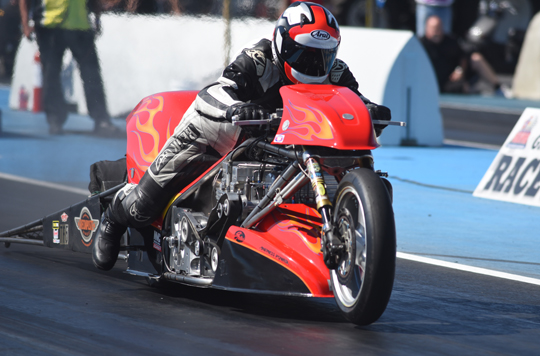 Sverre Dahl raced to victory in Top Fuel Motorcycle at the Drag Challenge at Gardermoen Raceway, round three of the EDRS Pro Nordic Motorcycle Championship. The Norwegian rider stormed to a stunning 5.89 seconds, a new personal best and track record, to defeat Rikard Gustafsson in an exciting final. In Super Twin Motorcycle Marcus Christiansen scored his second consecutive win of the season, while Kalle Lyrén was in a class of his own in Pro Stock Motorcycle with two 6.99-second runs and a win. In Super Street Bike Mogens Lund took the win in a great 7.03 seconds to defeat the so far this season unbeaten Mathias Bohlin in the final.

The Drag Challenge at Gardermoen Raceway in Norway was the third round of the EDRS Pro Nordic Motorcycle Championship. After heavy rain in the night, the track crew did an excellent job again in preparing a record setting track. Several personal bests and even track records were reset. 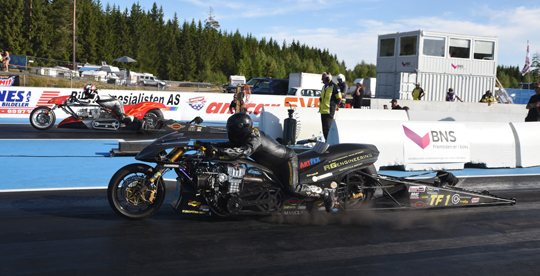 In Top Fuel Motorcycle Sverre Dahl gave the home crowd and the track crew something to cheer about. The Norwegian rider stormed to a great 5.94 seconds in the semifinals to face championship leader Rikard Gustafsson in the final. In a great race Dahl raced to a stunning 5.896 seconds, a new personal best and a new track record. Gustafsson had a good run as well, but the Swede’s 6.01 seconds couldn’t match Dahl’s fabulous elapsed time. 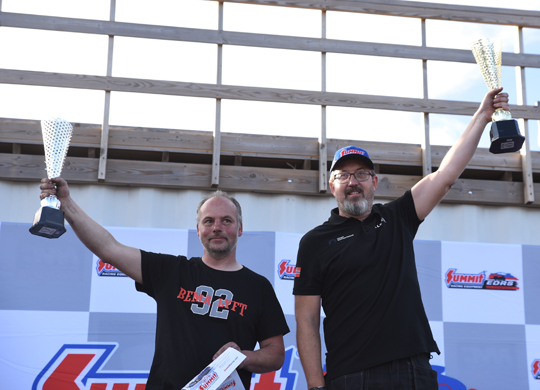 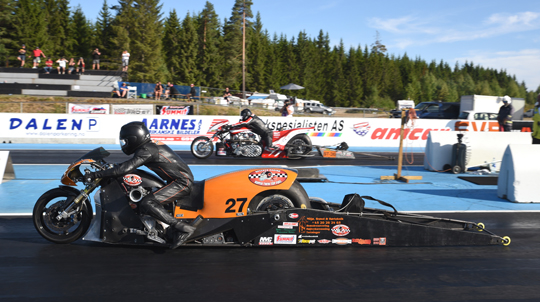 In Super Twin Motorcycle the numbers one and two qualifiers, Svein Olaf Rolfstad and Marcus Christiansen, didn’t make any mistakes and advanced to the final. Rolfstad couldn’t copy his stunning 6.23 seconds from qualifying, but the Norwegian rider was too quick for Lasse Leponiemi and Anders Hörnström. Christiansen won his first round on a holeshot, to improve on his qualifying performance in the semifinal to beat Samu Kemppainen in 6.40 seconds. In the final Christiansen improved once again to 6.38 seconds and as Rolfstad suffered serious engine problems, it was an easy win for the championship leader from Denmark. After his win at Alastaro it was Christiansen’s second consecutive victory of the EDRS Pro Nordic MC Super Twin Motorcycle championship. 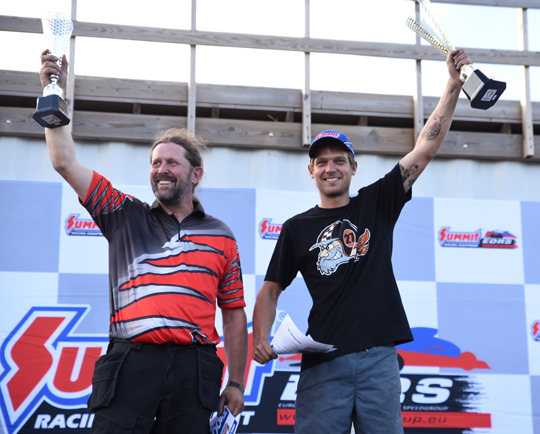 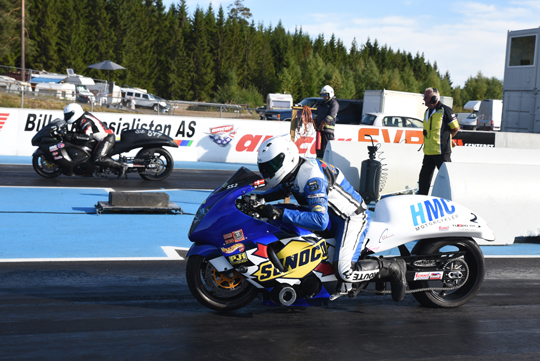 In Super Street Bike the numbers one and two qualifiers, Mathias Bohlin and Mogens Lund didn’t make any mistakes either and had to face each other in the final. After severe engine damage in the first round, Bohlin had to use a second engine in the next round, to storm to a stunning 7.019 seconds, a new personal best for the Swedish rider. Alex Hope couldn’t match Bohlin’s 7.06 seconds in the semifinal either and so the championship leader advanced to the final. Lund improved on his qualifying performance with one 7.12 and two 7.04-second runs to defeat Bianca Nilsson, Roberth Häggblom and Vesa Ruhanen. In the final Bohlin pulled a red light while Lund stormed to an even better 7.03 seconds to take his first EDRS Pro Nordic MC win of the season. 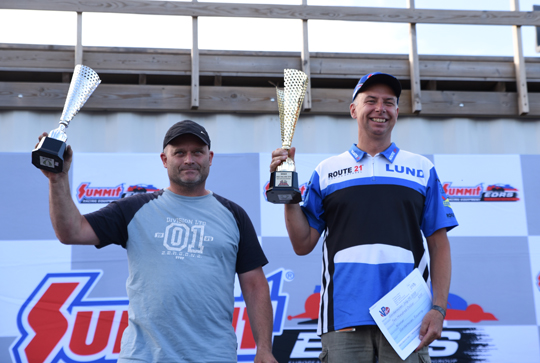 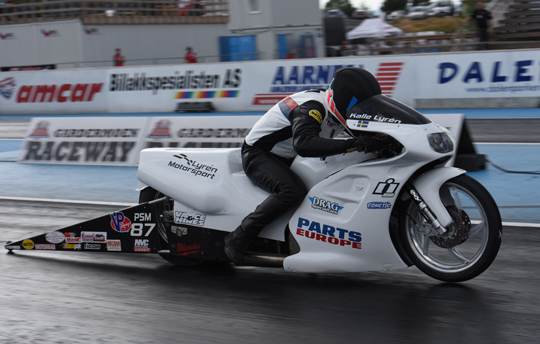 In Pro Stock Motorcycle Kalle Lyrén stormed to a stunning 6.999 seconds in the semifinal to advance to the final. In the other semifinal reigning champion Thomas Lysebraate Olsen suffered problems when the Norwegian rider tried to fire up his engine, handing the win to Bo Thorselius. But in the final it was Thorselius who had problems when firing up the engine. In a bye run Lyrén improved to 6.990 seconds to take a well deserved win as the former champion was in a class of his own at Gardermoen. 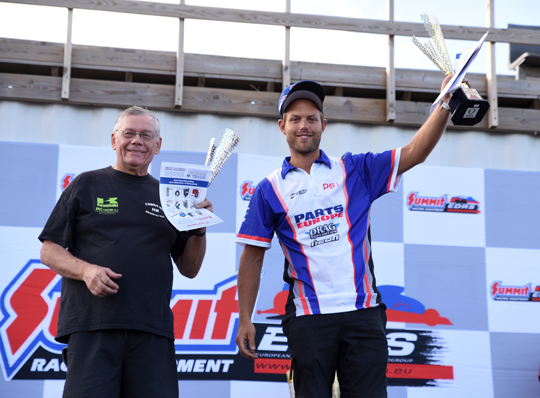 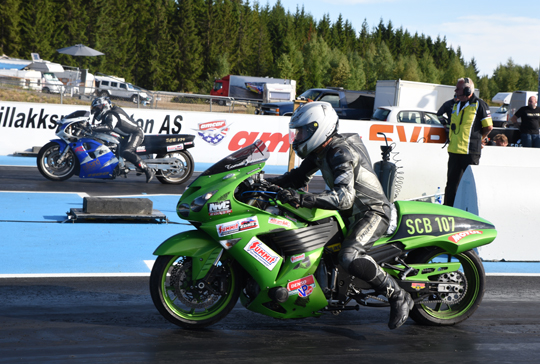 In Super Comp Bike the numbers two and three qualifiers, Peter Östlund and Tomas Jonsson advance to the final. After an almost identical reaction time, Jonsson had the better run and took the win. 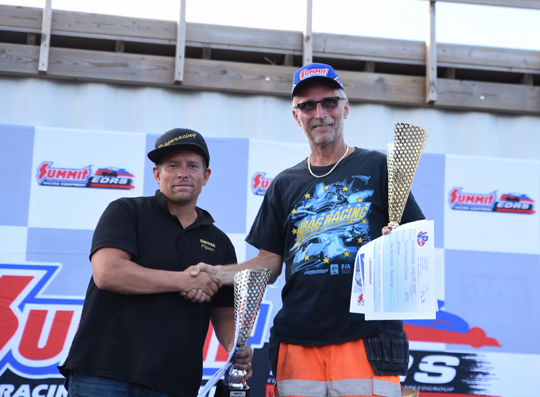 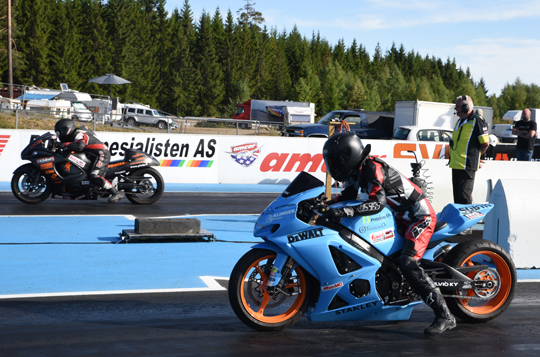 In Super Gas Bike Jami Oksanen and Alastaro winner Jenni Pekkarinen advanced to the final. Oksanen had a better reaction time while Pekkarinen suffered some problems at the start line. The Finnish female rider had the better run, but it was not enough to beat Oksanen. After his Tierp victory, it was Oksanen’s second win of the season. 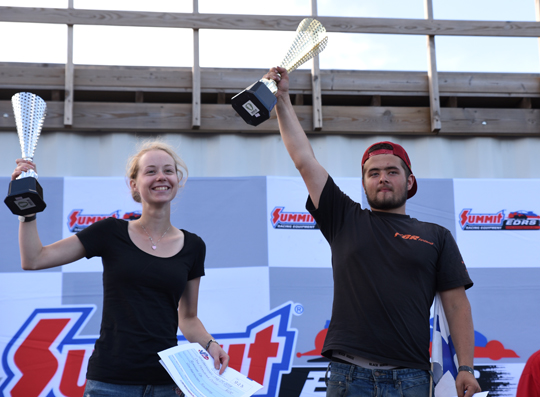 The EDRS Pro Nordic Motorcycle Championship continues August 23-26 with the final race of the season, the Summit Racing Equipment Internationals at Tierp Arena.

All the results of the Drag Challenge can be found here: