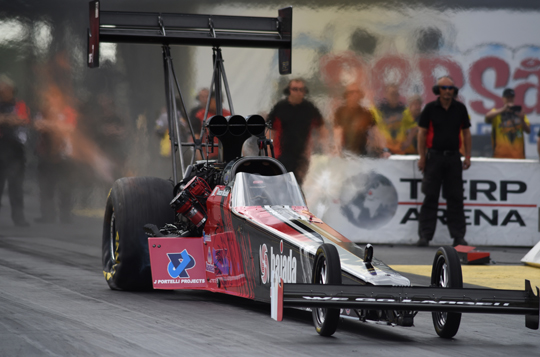 Duncan Micallef from Malta raced to victory in the Top Fuel final of the Tierp Internationals, round two of the FIA European Drag Racing Championship at Tierp Arena, Sweden. In Top Methanol Sandro Bellio surprised with a win in his first ever FIA race by defeating Dennis Habermann in the final. Reigning champion Michael Gullqvist was the winner in Pro Modified and reset the European record to 5.836 seconds, while Bengt Ljungdahl defeated Stefan Ernryd in the Pro Stock final to take the win.

Beautiful weather conditions at Tierp Arena at race day. There were two major upsets in the first round of eliminations in Top Fuel, as number one qualifier and reigning FIA European Top Fuel champion Anita Mäkelä was defeated by number eight qualifier Stig Neergaard, and number two qualifier Liam Jones ran into problems and saw home favourite Micke Kågered take the win. But the star in Top Fuel eliminations was Duncan Micallef from Malta. The Rune Fjeld Motorsport driver defeated Stefan Gunnarsson in the first round to storm to a winning 3.93 seconds in the semi-finals against Kågered. 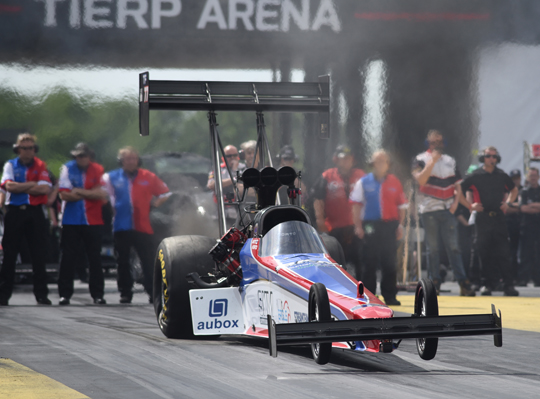 In the other semi-final Antti Horto, who had his best run in the first round with 3.96 seconds, defeated Neergaard and so the final was an all Rune Fjeld Motorsport affair. 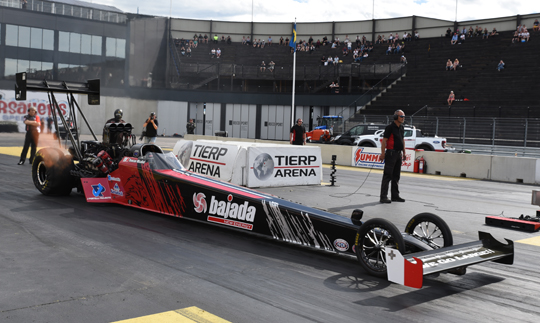 But as Horto suffered severe engine damage in the semi-final, the Finn could not run the final and so the win went to Micallef, the first ever FIA Top Fuel win for the popular Maltese driver. 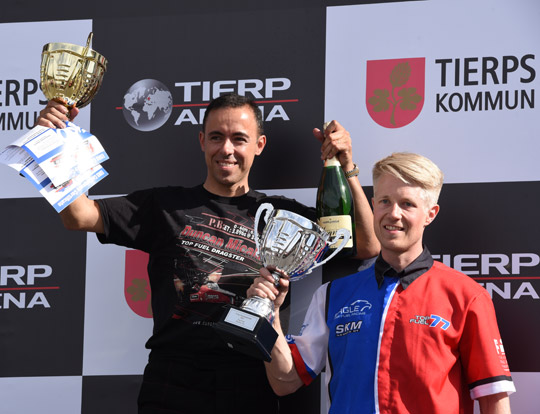 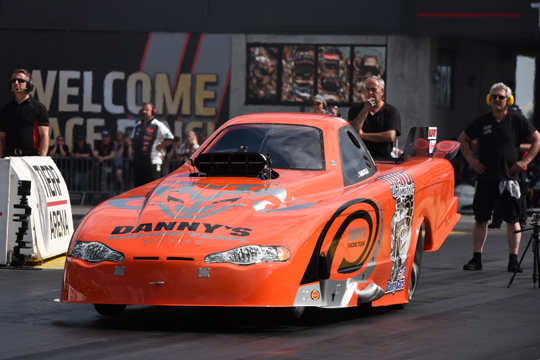 In Top Methanol number one qualifier Sandro Bellio was in a class of his own. The young Belgian driver recorded elapsed times of 5.52 and 5.58 seconds to defeat Ari Pietilä and reigning FIA Top Methanol Dragster champion Jonny Lagg. 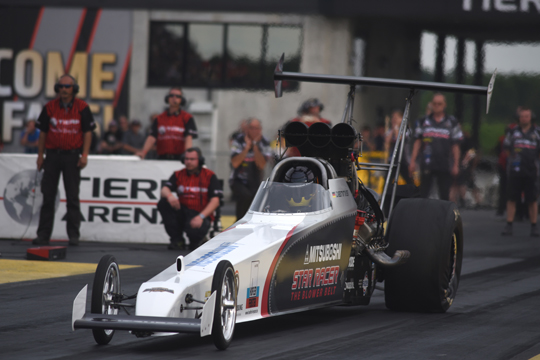 In the final Bellio had to face Dennis Habermann, and once again proved the great form of the family-run car by defeating the former European champion. 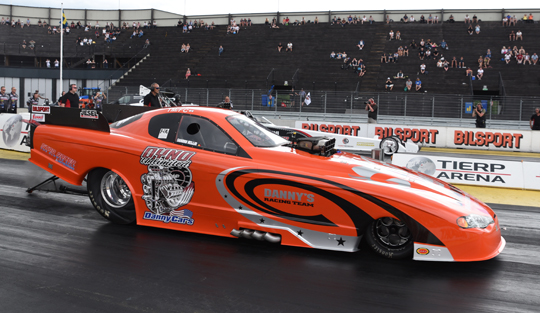 What made this victory extra special was the fact that Bellio completed his Top Methanol Funny Car licencing procedure at The Main Event and that the Tierp Internationals was his first FIA race. 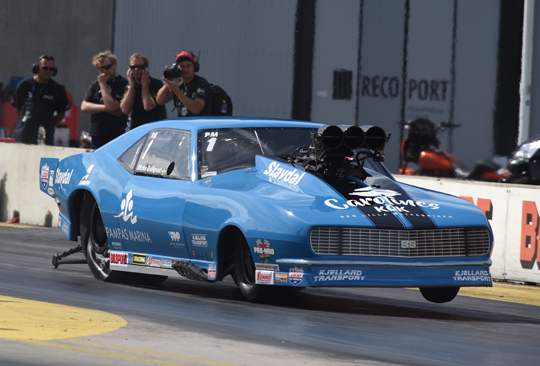 In Pro Modified number one qualifier Michael Gullqvist was both quick and consistent and after defeating Rolf Simonsson in the first round and a great semi-final race with David Vegter (5.88 seconds for the Swede and 5.96 seconds for the Dutchman), the reigning FIA European Pro Modified champion advanced to the final. 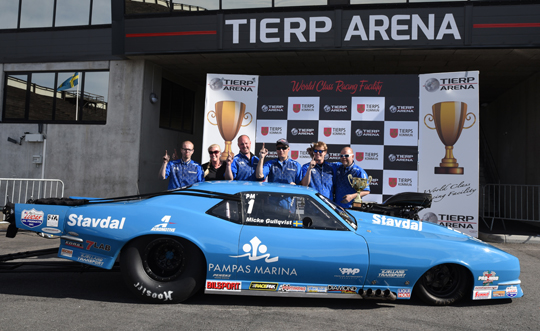 The winning and record setting team

Gullqvist saved the best for the last as he had to face Åke Persson in the final. Gullqvist stormed to a stunning 5.836 seconds at 400 km/h, a new European record and too quick for Persson (6.09 seconds). 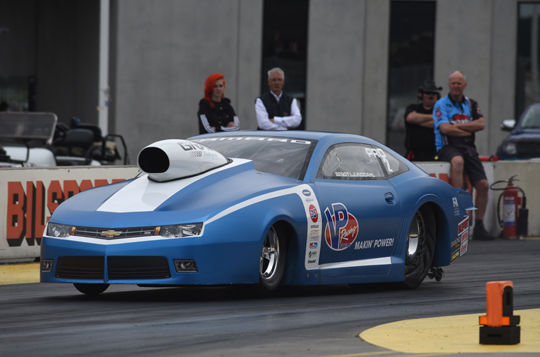 There was a major upset in the first round of eliminations in Pro Stock as 10-time and reigning FIA European Pro Stock champion Jimmy Ålund ran into problems and was defeated by Magnus Petersson. 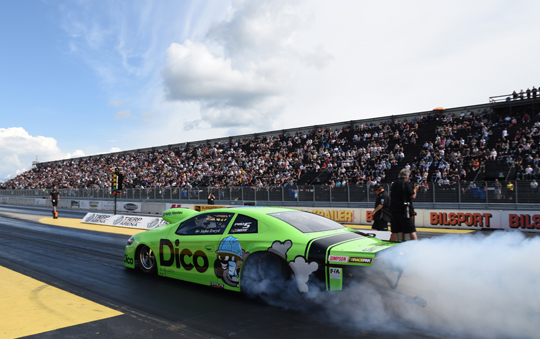 That made the route to victory for number one qualifier Bengt Ljungdahl much easier. With consistent 6.5-second runs Ljungdahl defeated Richard Sundblom and Thomas Lindström to advance to the final where the Swede had to face Stefan Ernryd. But in the final Ljundahl was once again in a class of his own and took the win in 6.531 seconds. 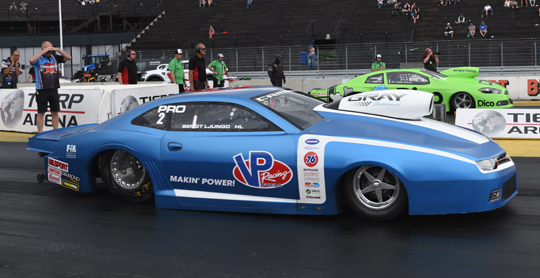