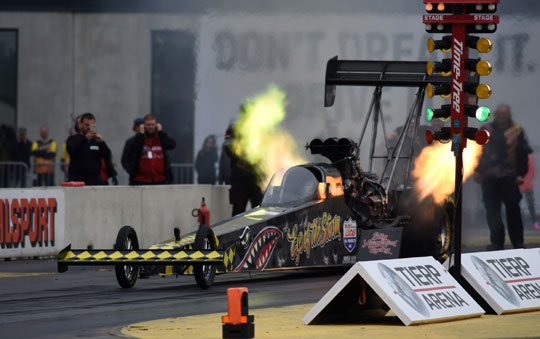 The 2016 FIA European Drag Racing Championship is at the halfway point of the season and after the summer break part two kicks off with the traditional NitrOlympX at Hockenheim. From Germany the teams have to travel directly to Sweden, as the following weekend the Scandinavian Internationals at Tierp Arena is on the calendar. For the drivers and teams not only an extremely tight schedule, but in one week the standings in the FIA European Championship can change dramatically. Who are the favourites at the eve of the 31st NitrOlympX at HockenheimRing’s Rico Anthes Quartermile, and who might be the leaders after Tierp? 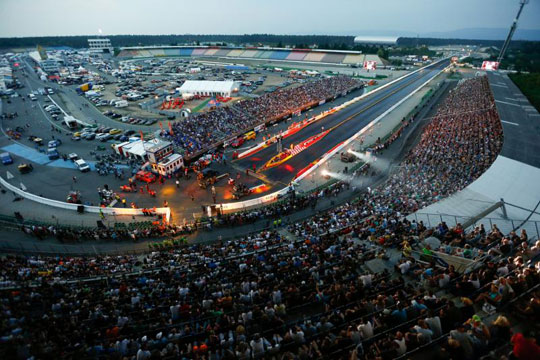 In the space of a week the FIA European Drag Racing Championship heads to two of Europe’s most beautiful drag racing facilities. Round four of the championship is from August 19 – 21 at the HockenheimRing and one week later (August 26 – 28) the state-of-the-art Tierp Arena hosts round number five. Two highly regarded events with a totally different character; the NitrOlympX with its special atmosphere of the Motodrome and Night Show, and the Scandinavian Internationals where it’s all about the sport of drag racing at a record breaking track. 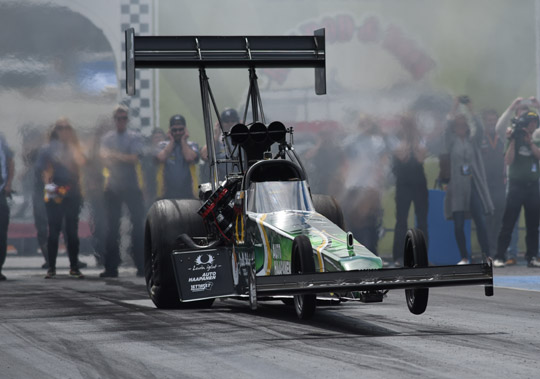 Stig Neergaard is the new leader in the FIA European Top Fuel Championship after round three at Alastaro, but only one point short of the Dane, Anita Mäkelä is in second position. Both suffered some problems at Hockenheim last year. Tierp normally is Mäkelä’s track. The Finnish fan favourite won last year’s Scandinavian Internationals in record breaking performances and was unstoppable in June at the same track again. Micke Kågered is the number three in the championship and only 32 points behind leader Neergaard.

Hockenheim is Kågered’s favourite track as the Swede won the German race in 2014 and 2015 and it was the turning point of his season many times. Maybe it will be once again this season. Liam Jones from England is the number four after three races and after some problems earlier in the season, his first round win and elapsed time at Alastaro might be a boost for his championship ambitions. Hockenheim is the home race for Urs Erbacher and with his numerous Swiss fans in the grandstands, the multiple FIA European champion will be a force to be reckoned with. 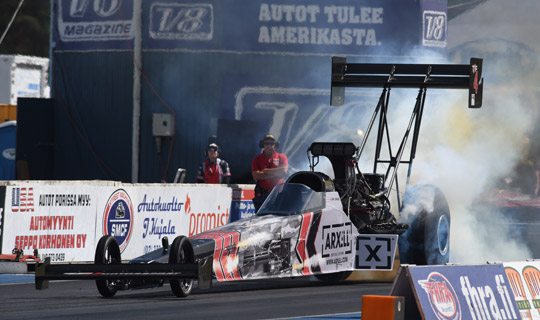 At Tierp Arena ten drivers will have to qualify for an 8-car elimination ladder. Like at Alastaro, ski jumping legend Janne Ahonen and Timo Lehtimäki, both from Finland, will be present and from Sweden Stefan Gunnarsson, Björn Mårtensson and Monica Öberg are on the entry list. It’s great to see Duncan Micallef back in action in the second Rune Fjeld Motorsport car. Last year the Maltese driver was runner-up at the Scandinavian Internationals. 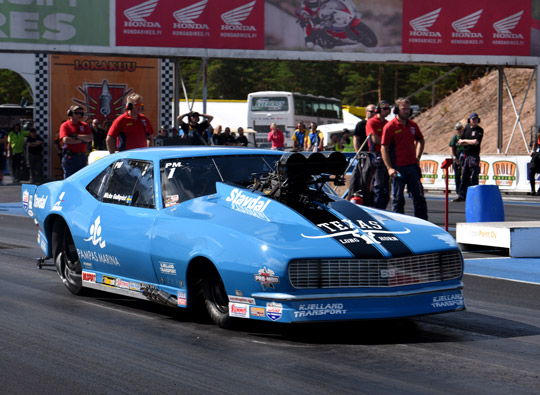 Michael Gullqvist is leading the Pro Modified points standing after three races, and the reigning champion will be out for revenge after his first round red light at Alastaro. Bruno Bader from Switzerland is 24 points behind, and Mats Eriksson from Sweden is third, only five points short of Bader. 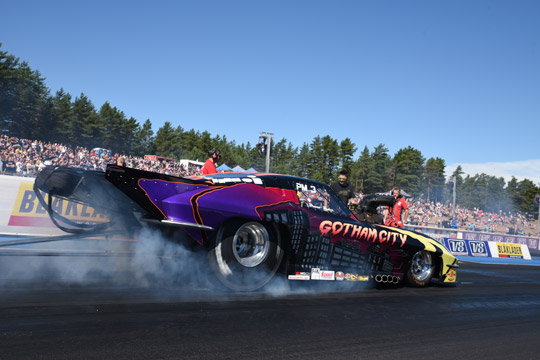 Johan Lindberg, David Vegter and Thomas Stiefel are the numbers four to six in the championship and all three are still in the race for a top three finish, or even more. A race win would help a lot of course and all are capable of doing so. 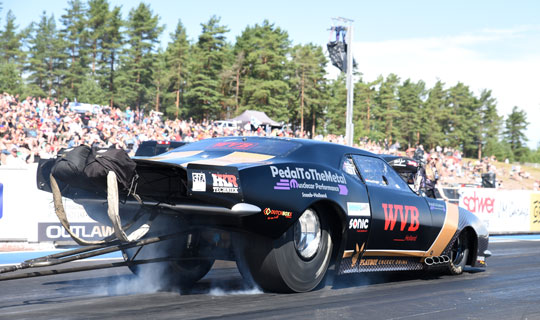 Apart from this top six, the entry lists of Hockenheim and Tierp Arena are pretty different. At the NitrOlympX there will be drivers from the central part of Europe and at the Scandinavian Internationals Swedish drivers dominate. 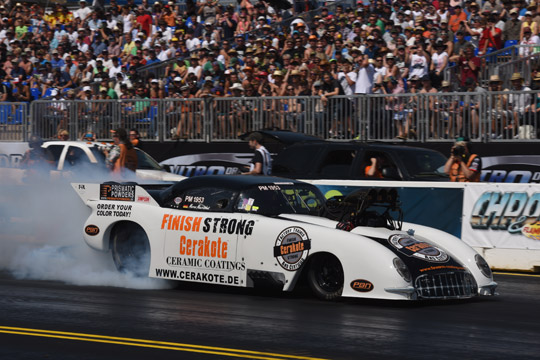 At Hockenheim we see Norbert Kuno and Marco Maurischat from Germany, Michel Tooren and Marck Harteveld from The Netherlands, Marcus Hilt and Roland Bolletier from Switzerland, Jean Dulamon from France and from Kuwait comes Hussain Al Shammari. At Tierp Arena the extremely quick Åke Persson and Anders Nilsson will rejoin the tour, as will Andreas Arthursson, Fredrik Fagerström and Rolf Simonsson. 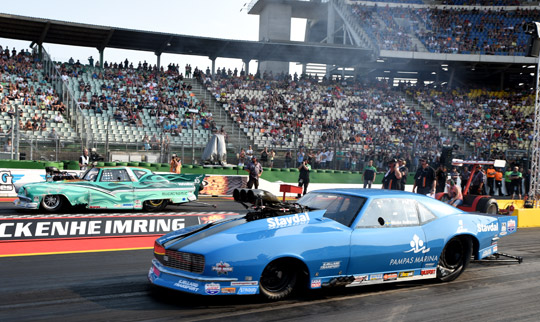 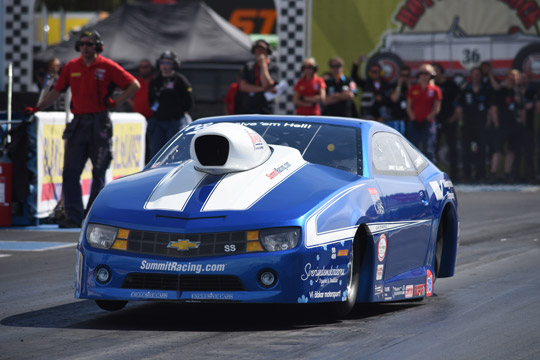 Jimmy Ålund is the current leader in Pro Stock at the halfway point of the season, but the multiple champion is challenged more and more by Bengt Ljungdahl, the current number two in the championship. Ljungdahl was number one qualifier at Alastaro with the ex-Gray Motorsports Camaro and will be looking for more points at Hockenheim. 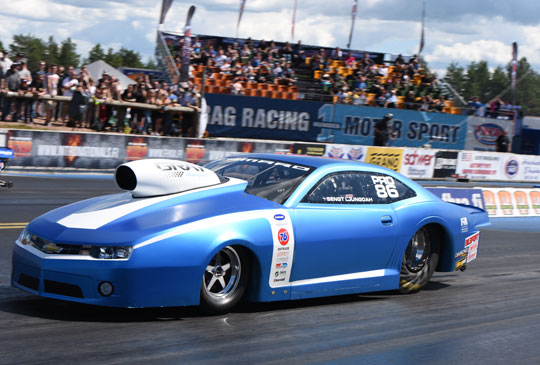 As he already announced at the start of the season, Thomas Lindström will skip the NitrOlympX, but the reigning champion and number three in the provisional standing is back at Tierp. Magnus Petersson is fourth, only seven points short of Lindström, with Michael Malmgren and Stefan Ernryd in fifth and sixth position. 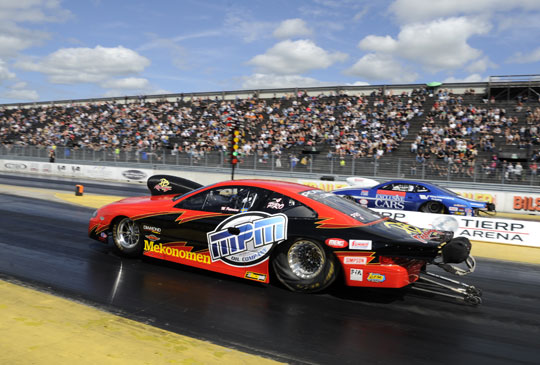 Hockenheim has six entrants in Pro Stock, but at Tierp the field will be thirteen again, and the riders will have to qualify for an 8-car elimination ladder. From Finland Hannu Kalliomäki and Sampsa Palos can surprise, and at their home track, Jonas Boberg, Simon Gustafsson (will also be at Hockenheim), Tommy Lundström and the talented rookie Robin Norén are back in action. Christian Sagelv will have his first race with the new Ford Mustang and will do some testing for the 2017 season. 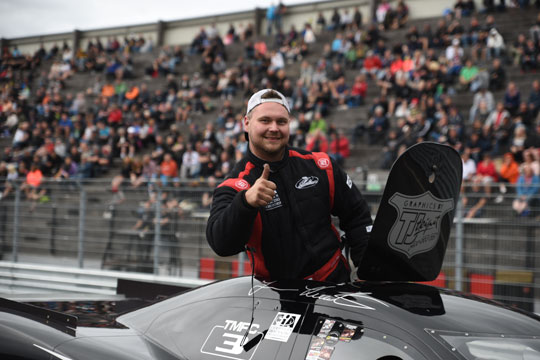 Johnny Oksa won his first ever FIA European Championship race at Tierp in June, was the number one qualifier at Alastaro and is also leading the championship. Ari Pietilä is second and it’s great to see both Finns will be racing at Hockenheim for the first time of their career. Mikael Larsson is the number three in the championship. The Swede will have to skip Hockenheim, but is back in action at his home track Tierp. 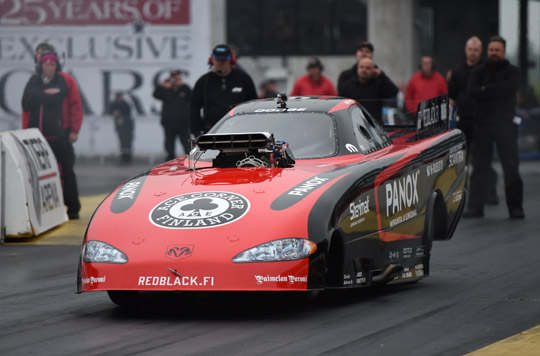 Reigning champion Leif Andreasson was a late entry for both races after the Swede suffered engine damage at Alastaro. Jürgen Nagel will of course be the favourite for the home crowd in Germany, but the number five in the championship will not go to Tierp as that schedule is too tight for him. 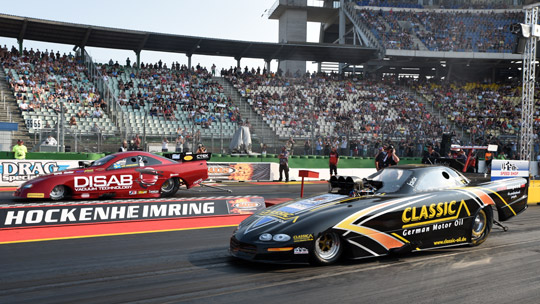 There will be a more than welcome return for Danny Bellio. At the test day before the 2015 Main Event a parts failure caused a fatal engine damage, and as the Belgian team already had a long period of bad luck behind them, they decided to take a break from racing. But now Bellio and the family run team are back and on the entry list for Hockenheim and Tierp. Bellio was always a force to be reckoned with and had one of the fastest and quickest cars of the field, so let’s hope he can find his old form and rejoin the FIA tour for another long period.

Chris Polidano from Malta is leading the FIA European Championship in Top Methanol Dragster, with Jonny Lagg in second position. The TMD class was not contested at Alastaro, thus the difference between the numbers one and two in the championship is only 12 points. 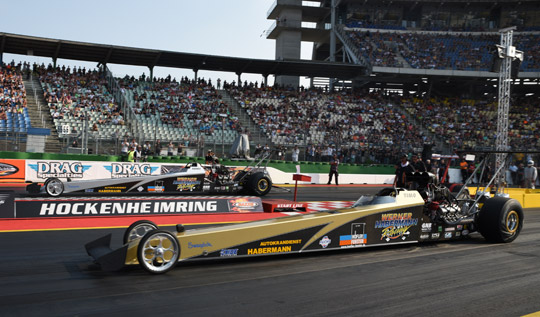 The NitrOlympX promise to be the best race of the season for Top Methanol Dragster. Dennis and Timo Habermann, the numbers one and two of last year’s championship, are back on track and will only go for a place in the final. 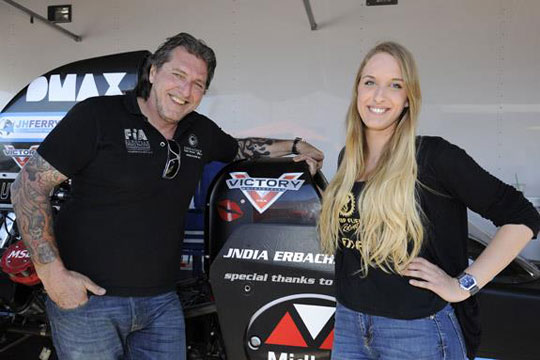 Special attention will go out to the European Top Methanol Dragster debut of Jndia Erbacher, the daughter of multiple FIA European champion Urs Erbacher. Jndia did her licence runs in the States, took part in a race over there and will drive the same car as she did in America. From England comes Rod Harrison, who is in his first year in the class. Polidano is not on the Hockenheim entry list, but will be back at Tierp.