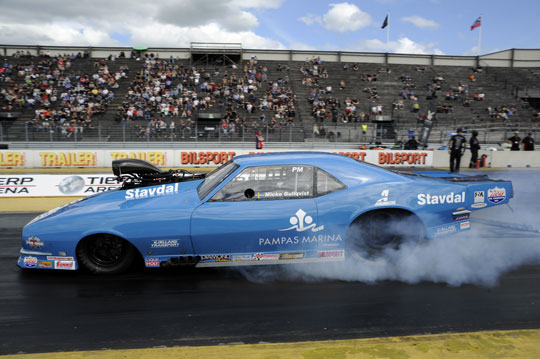 Michael Gullqvist once again proved at the Tierp Internationals that you don’t have to be the quickest all weekend to win a race. The reigning FIA European Pro Modified champion was the number ten qualifier, but stepped up in eliminations to run 5.9 seconds when he needed to most, and beat Mats Eriksson in the final to take the lead in the championship. But there were other drivers who impressed at Tierp Arena too, such as Åke Persson with 5.88 seconds and David Vegter with two 6.00-second runs.

The Scandinavian Pro Mod drivers were out for revenge on their home ground after Bruno Bader’s Main Event win. With 22 entrants, and many extremely fast Swedish combinations making their first appearance in the 2016 FIA European Pro Modified Championship, the Tierp Internationals promised to be a record setting race. 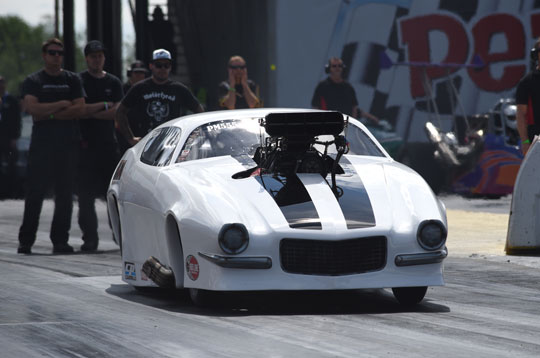 Unfortunately, qualifying was badly affected by the rain, and the four originally planned qualifying sessions had to be rescheduled to two runs on the Friday evening. On the green and cold track the ETs and bump spot were not as low as expected, and there were also combinations that didn’t make it to the finish line, so there were 17 cars on the final qualifying list. Number one qualifier after the first run was Åke Persson, who had Jonnie Lindberg as his tuner at Tierp. But as the Camaro driver couldn’t improve on his earlier 6.24 seconds, Persson was passed by Mats Eriksson (6.14 seconds) and Johan Lindberg, who was a non-qualifier after the first run, but improved to  6.23 seconds to take over the number two spot. 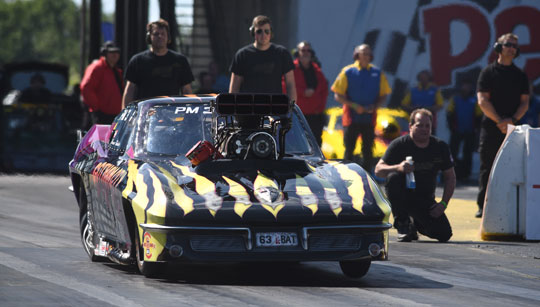 Bruno Bader was fourth, but in his second run the Swiss Corvette got out of control and slightly touched the wall. David Vegter was fifth with 6.36 seconds. Behind the Dutch Pro Mod racer, there was a big gap to number six, Anders Nilsson. Last year’s Alastaro winner recorded 6.71 seconds, but knew he could go much quicker. 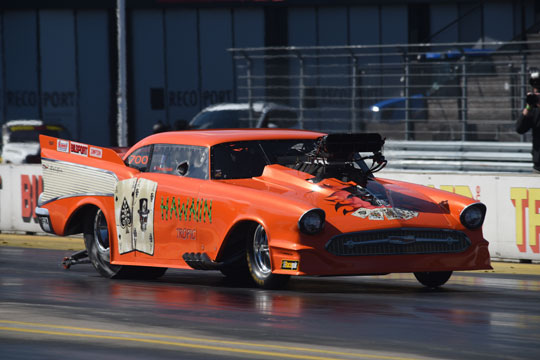 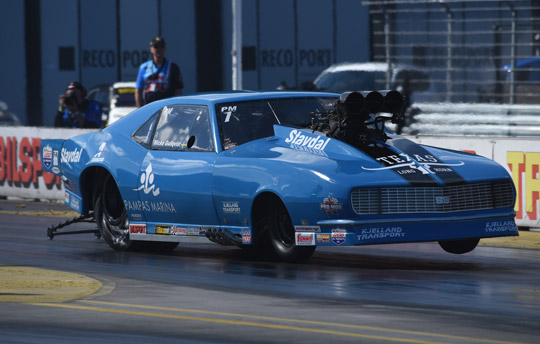 There were totally different conditions on race day as the sun was back and thanks to the hard working crew, even after the persistent Saturday rain, the track was in perfect condition. Eliminations gave the crowd what they expected to see at the Tierp Internationals, and with spectacular runs, quick ETs and upsets, they got the best Pro Mod racing you can have. 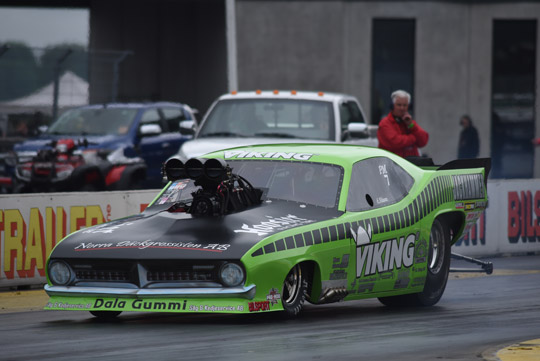 No major upsets in the first round as almost all favourites won their race. Eriksson beat Micke Johansson, Stefan Gustafsson was disqualified, handing the win to Norbert Kuno, and Bader had no problems with Jöran Persåker. Åke Persson improved to 6.11 seconds to beat Rolf Simonsson from Denmark, while Gullqvist had more problems than expected to defeat Håkan Persson. Stiefel had an extremely bad reaction time, handing the win to a slower Nilsson, while Hussain al Shammari from Kuwait pulled a red light and saw Lindberg improve to 6.08 seconds to win the race. 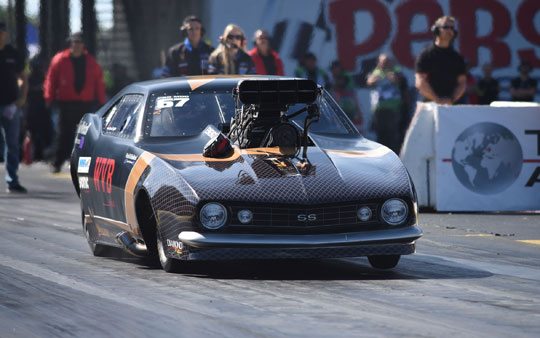 But Vegter was the surprise of round one, as the Adam Flamholc tuned Vegter Pro Mod Racing ’67 Camaro stormed to 6.003 seconds at 389.9 km/h, two personal bests for the Dutch racer and the quickest and fastest run of the first round. 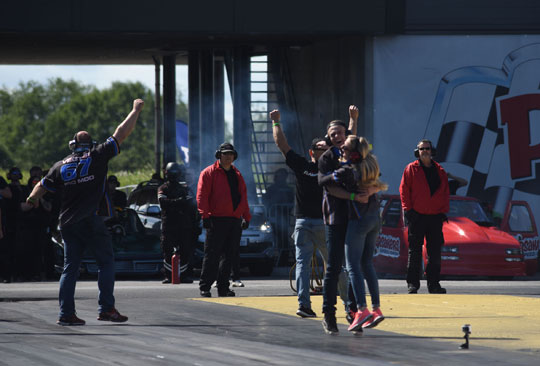 The quarter finals saw great racing and jaw dropping ETs. Eriksson improved to 6.08 seconds to defeat Kuno (red light) and advanced to the next round. Vegter and Bader both had traction problems at the start line, but as the Dutch racer could get in control of his Camaro a bit quicker, he advanced  to the semi-finals, and the Main Event winner was out. 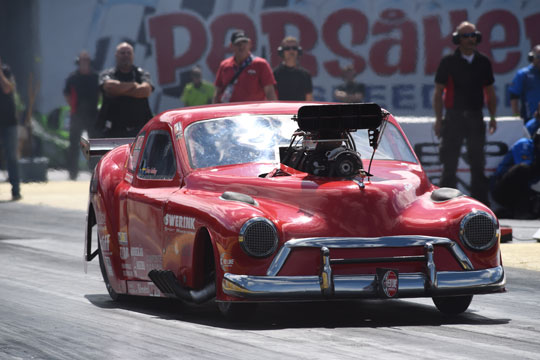 Gullqvist had to face Lindberg and at the right moment the reigning champion stepped up and recorded his first 5-second run of the weekend. In a close race Gullqvist (5.95 seconds) defeated Lindberg, who also improved on his earlier performance with 6.02 seconds. But star of the quarter finals was Åke Persson. In the Jonnie Lindberg tuned Camaro Persson stormed to an arrow straight 5.88 seconds at 393.6 km/h, way too quick for Nilsson. 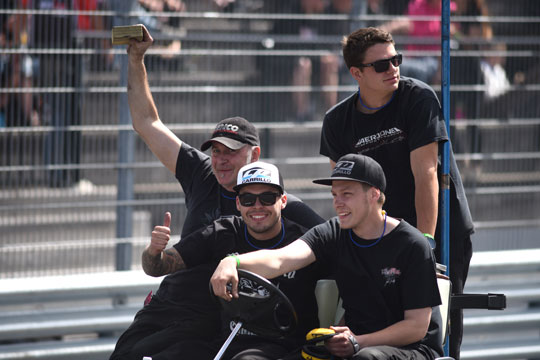 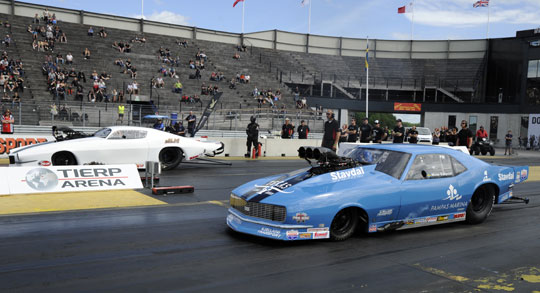 In the semi-finals Vegter had to face Eriksson and Persson Gullqvist, two races to look forward to. But Persson pulled a red light (-0.3 seconds!), handing the win to Gullqvist who had some problems and recorded 7.0 seconds. 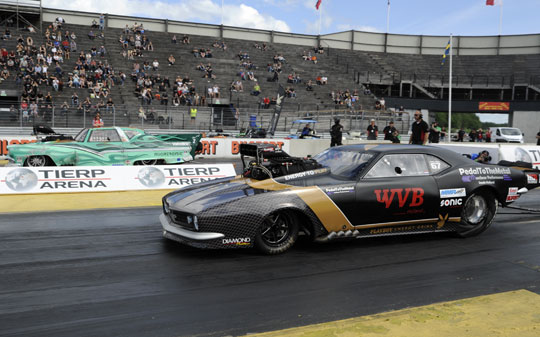 Much better was the run between Vegter and Eriksson. The Swede had the better reaction time and although Vegter reset his personal bests once again with 6.002 seconds at 390.5 km/h, it was not enough to make up the lost ground, and so Eriksson advanced to the final with a win margin of 0.008 seconds! 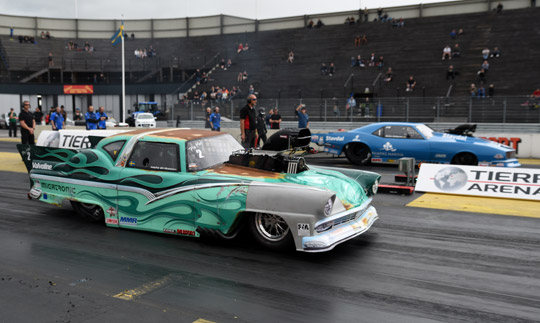 With Gullqvist and Eriksson, the numbers one and two of last year’s FIA European Championship, we saw an almost traditional final at Tierp Arena. Eriksson improved to 6.02 seconds, his best ET of the weekend, but as mentioned before, Gullqvist goes quick when he needs it most, and recorded his second 5-second run of the day to take the win in 5.94 seconds at 393.9 km/h. 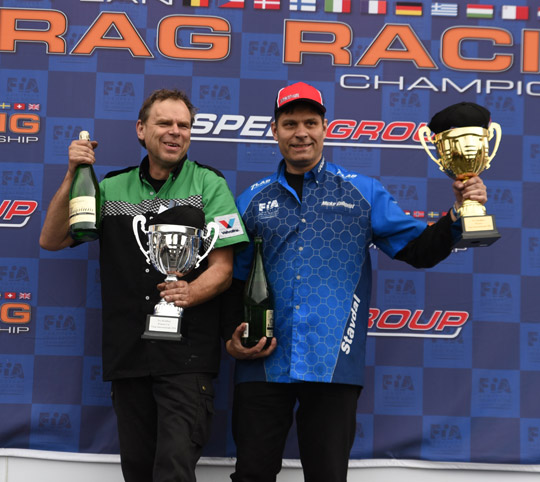 Gullqvist is the new leader in the FIA European Championship, with Main Event winner Bader in second. Only three points behind the Swiss driver, Eriksson is third, while Lindberg is fourth and Vegter fifth. 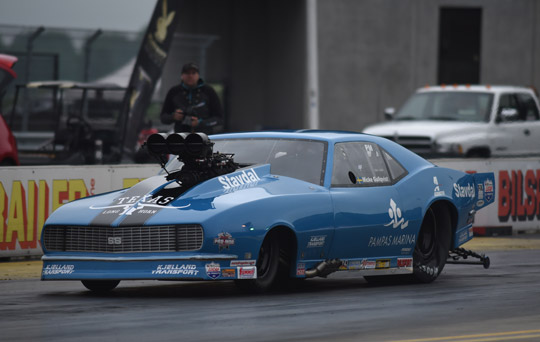